Only one survives gov’t recruitment exam 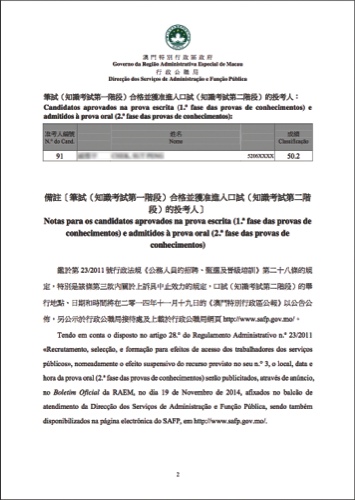 The Public Administration and Civil Service Bureau has released the results of the written examination for the recruitment of first rank, second level senior officers for legal matters (Técnicos Superiores de 2.ª classe, 1.º escalão – área jurídica). Out of the 508 who registered for the exam, only one candidate was able to pass.
The sole survivor scored 50.2 points in the exam, which took place on March 15 this year.
Although there were more than 500 candidates registered, only 380 showed up, five of whom were disqualified.
Some lawmakers were shocked by this outcome and urged the government to review the central public servant recruitment mechanism.
Song Pek Kei, who holds a law degree from the University of Macau (UM), told the Times that some candidates had commented that there were too many questions on the exam paper and it was difficult to answer all of them in time.
“Once [the exam] finished, some people said that while there is a considerable amount of questions [on the paper], the way candidates are required to answer them is relatively demanding too”, she said.
“It was not like before when there were multiple choices. Candidates were required to provide written answers, both short and long. This means that it took a longer time [to answer]. Provided that there is the time limit, it has also meant that candidates weere unable to answer all the questions in the given time frame”, she explained.
Ms Song does not believe that the requirements of the exam were too high. In fact, she thinks that the government was only trying to challenge candidates with an exam on a wide range of areas, which is also part of the reason why the number of questions has increased.
Moreover, the lawmaker revealed that committees of the Legislative Assembly (AL) may start looking into the central recruitment mechanism after the summer break ends in October.
“The fact is, the mechanism has been in place for three years. But civil servants who were recruited through the mechanism were only able to start working in public departments this year. Therefore, there is a serious doubt regarding the efficiency of the mechanism”, she said.
Ms Song’s colleague in the AL, professor Gabriel Tong of the UM Faculty of Law, told MDT that he was shocked by the result. He believes that there is room to review the content and objectives of central recruitment exams. Prof Tong also thinks that examination results can be presented in a more transparent manner.
This is not the first time a government recruitment exam has had a low pass rate. In 2010, the authorities organized an exam to recruit general practitioner interns. Out of the 318 candidates, only two were able to pass the exam.
The Health Bureau director Lei Chin Ion had blamed the result on the quality of the candidates.

One of the candidates who took part in the exam, Mr Vong, told the Times that SAFP should explain to the public why there was only one candidate who passed the exam. He also suggested that the authorities should apologize for this outcome.
Mr Vong said that there were too many questions on the exam paper. He did not think that the questions were difficult. Nevertheless, it was a very time-consuming task for them to find answers from various legal codes, which “made it more like a page turning competition rather than an exam”, he quipped.
Although he believes that the blame should be laid on SAFP, he adds that if they insist the length and difficulty of the exam paper is appropriate, then the public should question the teaching quality of UM’s Faculty of Law.
Mr Vong also revealed that the invigilators had asked the candidates to tear out parts of the legal books brought into the venue that were not in the syllabus. While he agreed with their reasons, Mr Vong thinks that it is disrespectful toward the legal codes.