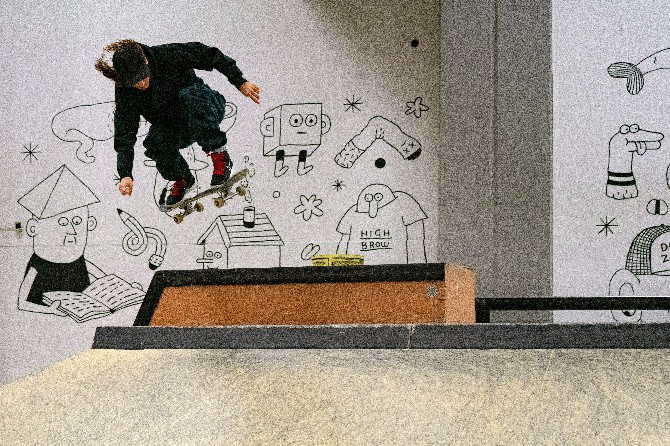 Oskar Rozenberg nonchalantly drifts around the skate park before unleashing a series of high-energy tricks — mounting a wall, sliding down a railing with his arms outstretched, vaulting a stairwell, accelerating into a ramp and giving it some air.
“I’m just warming up,” the two-time skateboarding world champion and Olympic hopeful says over his shoulder as he floats away.
His long, dark hair flowing beneath his black cap and over his hoodie, the 23-year-old Rozenberg is in his element — and in his own world — as he seeks out every line, every dip and every hollow of the indoor park to satisfy his creative needs.
He gets particularly excited talking about his current favorite trick, the backside nose blunt.
“You go up on the edge of the quarter pipe, you do a backside 180 turn and you land on the nose. Then you pop in, back into the transition,” Rozenberg said. “It’s such a flowy trick. It’s just vibey.”
If that’s akin to a foreign language, it might not be six months from now.
Skateboarding is coming to the Olympics for the first time at this year’s Tokyo Games and Rozenberg, a stand-out Swede in a field mostly dominated by Americans and Brazilians, might be its breakout star.
“Oski,” as he is fondly referred to, is a skateboarder best known for his outrageous creativity and for thinking on his feet — or, in his case, his wheels. He will arrive in Tokyo as the world champion of the Vans Park Series Pro Tour after his win in Salt Lake City in September.
“He is spontaneous,” said John Magnusson, who works for the Swedish Skateboard Association and will be Rozenberg’s coach in the run-up to the Tokyo Games. “He maybe has the first two tricks planned and then he goes for whatever. When Oski flows it all together, he is unbeatable because he is that good.”
Rozenberg’s strength may yet prove to be his weakness when it comes to the Olympics.
The edgy, rebellious, somewhat underworld pursuit of skateboarding is about to enter the mainstream, joining the more structured world of traditional sports.
It will freshen up the Olympics, for sure, and appeal more to younger viewers, but will the popularization of skateboarding mean it loses its counter-cultural status? There are also concerns that judging in the Olympics will be more about box-ticking rather than a desire for expression and creativity, potentially dampening its appeal — and the medal chances of Rozenberg, with his off-the-cuff style.
He thinks, however, that skateboarding being added to the Olympic program has “more positives than negatives.”
“It pushes the sport into a different direction it hasn’t really been in before,” Rozenberg said. “It’s kind of new territory.
“A lot of other sports are about jumping a centimeter longer or a centimeter higher than what you did last year. But skateboarding is the opposite of that. There is so much you can do. I think it will actually bring a new aspect to sports.”
Rozenberg first came across skateboarding at the age of 9, when he was on a bike ride with his father and bumped into friends at the newly built skate park in Malmo — Stapelbaddsparken.
He tried it out, went back the next day, and “was there every day for four years.”
“I think what attracted me the most was the group of people and how everyone took care of each other, and how all of a sudden I was able to hang out with people five or 10 years older than me,” Rozenberg said. “There wasn’t an age barrier. Everyone was just hanging out.”
He liked the easy-going nature of skateboarding.
“When I was playing football, I remember being a bit sick of it, always having to come to practice on time and do this or that in practice,” he said. “Skateboarding was the complete opposite … It’s like everything was on your own conditions.”
Rozenberg attended a one-of-a-kind high school — Bryggeriets Gymnasium — that had skateboarding on the curriculum and was located inside one of the top skate parks in Malmo. Rozenberg said this background means he has a “different story” to the big skaters from America who grew up in California and had “all the best skate spots, all the best parks, all the contacts that you need in terms of sponsors.” 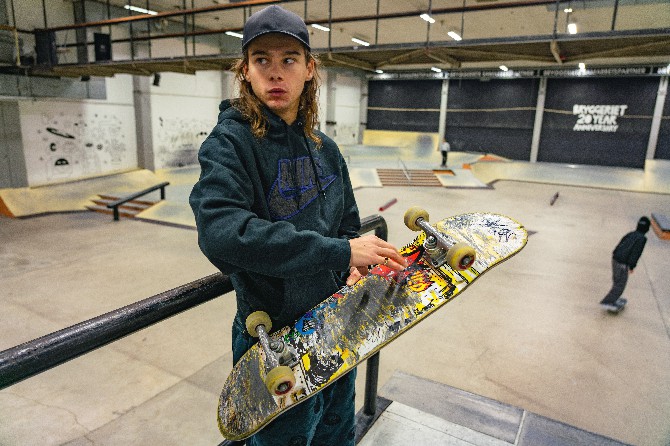 “I think a lot of skaters who are coming up right now who are from Europe are adding a new dimension to skateboarding,” he said. “The skate spots here are so different to the skate spots in America, so that naturally forms a different environment, a different type of skater.”
Rozenberg’s idols include Tony Hawk, a skateboarding pioneer from the 1980s who had a series of computer games — one of which Rozenberg remembers completing on one New Year’s Eve. Another is modern-day American skater Grant Taylor.
“He was the coolest guy in my eyes,” Rozenberg said of Taylor. “Some skaters only specify in one skating but he did it all. His style is unexplainable.”
Up-and-coming skaters might be saying similar things about Rozenberg, whose imaginative routines put him among the world’s most popular competitors and likely attracted him to Nike, one of his many sponsors.
“I try to put together a line in my head,” he explains as he goes through his typical routine. “It might be a line I have been thinking about as I was standing on the platform, like ‘Oh, that could be cool to do that there.’ Or it might be a line I actually did, a line I stumbled upon and I was like, ‘Oh, that was a really good line.’
“A lot of times, especially when I pull off a good contest run, I figure it out literally at the last moment. On certain occasions, I figured it out while I have been doing the run, like spontaneously, and it just works out.”
With qualification events to come in Peru, China and the United States, Rozenberg is on course to qualify for the Olympics and compete in the park tournament that will feature 20 skaters.
He will be one of Sweden’s biggest gold-medal hopes in Tokyo.
“Skateboarding is at its best when you get that ‘no one expected that’ feeling. That’s what Oski is good at. He can bring that something that no one thought about,” Magnusson said. “Some people, you already know what they are going to do when they drop in. But Oski doesn’t even know himself what he is going to do. And that’s his strength.” STEVE DOUGLAS, MALMO, AP