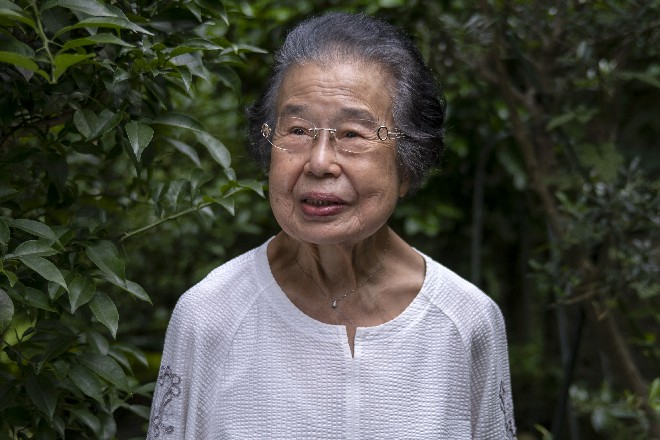 Fumie Sato poses for picture in her backyard Saturday, at her home in Yokohama, Japan

The last day of the Pacific War was also supposed to be Fumie Sato’s last.
After hearing Emperor Hirohito’s Aug. 15, 1945, radio broadcast declaring Japan would soon be “enduring the unendurable” in defeat, her father, an Imperial Army officer in Manchuria, announced his family would die by suicide together because the Soviets would soon invade their neighborhood.
She was 13.
Now 88, as the 75th anniversary of the Pacific War’s end approaches, Sato told her story publicly for the first time to The Associated Press. Not even her children had heard it until she recently showed them a letter detailing her ordeal in Manchuria. Sato is the mother of AP journalist Kiichiro Sato.
Somehow, when she learned that she was to die, she remained calm, even as she watched her father help bury the neighboring family in their yard after they killed themselves.
“There was nothing I could do. I just had to brace myself for it,” Sato said.
But later, when her father returned from an army meeting, he carried an order that his family must return to Japan alive.
For two years they waited for evacuation, living in constant fear of being attacked by the Russians now in Manchuria. Captured at one point by the Soviets, her father was about to be sent to Siberia when Chinese friends rescued him.
Her family lived on meager earnings from selling fermented beans that they grew in a shelter and selling tobacco made from leaves they bought from Chinese growers. Fearing attack by Russians, older girls shaved their heads so that they looked more like boys.
Sato’s father got sick and died and never made it home.
In 1948, they were finally allowed to evacuate. Her mother and other siblings went ahead. Sato stayed with a younger sister, Tomiko, who was ill, and they were to take a later train meant for the sick and their caregivers.
But before they could leave, her sister died. Sato was told she couldn’t get on the train alone, but she was saved because there happened to be a solo patient who agreed to travel with Sato.
“If that person wasn’t there, I would have been an orphan and never would have returned to Japan,” Sato said. “Fate was on my side. I was lucky.”
She hugged a box containing the ashes of her sister to her chest as she traveled to Nagasaki, where she was reunited with the rest of her family at her uncle’s home.
Sato declined her uncle’s offer to pay for her high school, and instead got a job to help him.
Sato came forward with her story because at 88, she wants her children to know the suffering she went through after the war.
“I’m already old, I could die any day. I thought it would be sad if my children didn’t know anything about their mother’s childhood memories,” she said.
Former classmates from her school days in Manchuria invited her to join a trip there, but she declined.
“I only want to remember happy memories,” Sato said. MARI YAMAGUCHI, TOKYO, AP