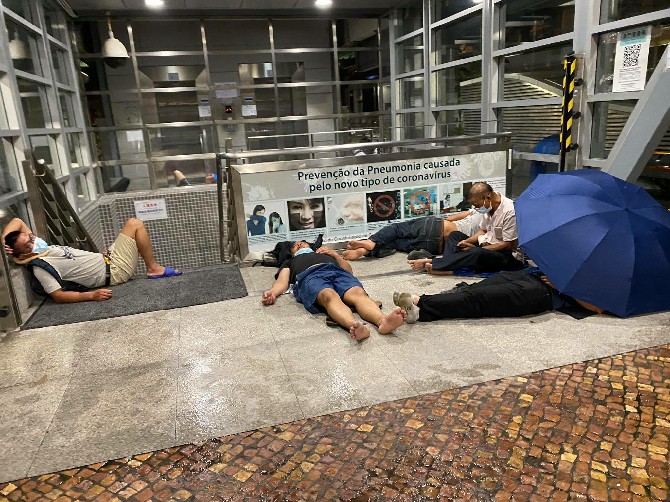 A screencap of individuals who slept near the Border Gate

Following the rush to update their polymerase chain reaction (PCR) test results to return to Zhuhai, many test-takers were forced to sleep on the streets overnight while they waited for their PCR results.
The scenario was first discovered by local media All About Macau. Photos posted by the media outlet’s social media page showed that people were lying either on the floor or benches near the Border Gate from Tuesday to yesterday morning in an attempt to get some rest overnight.
Authorities in Zhuhai have shortened the validity period of the PCR test for border crossing to 24 hours, meaning that most of the existing PCR test results were voided when the new validity came into place.
People residing on the other side of the border, including non-resident workers and Macau residents, rushed to the Border Gate to return to Zhuhai. Many of those who missed the deadline of Tuesday, 3.30 p.m., had to take a new PCR test at the Workers’ Stadium on the side of the Border Gate.
As there was intermittent rain last night, some individuals who slept near the exits opened their umbrellas to protect themselves from the rain.
This occurred because the PCR test results would only be available six to seven hours after the sample was collected. They were not able to make trips to Zhuhai before their new results were out.
The local media spoke with some of the non-resident workers. They shared how they had lined up for nearly six hours before getting their secretion samples collected for the PCR test.
Considering the need to wait for six to seven hours prior to the release of results, they decided to find a public place near the Border Gate to get some rest. Upon receiving their test results, and once the border checkpoint opened, they could head back to Zhuhai.
At a Chief Executive Press Conference yesterday, the government head was asked about the situation and the lack of management provided.
Chief Executive Ho Iat Seng revealed that the government has disaster shelters for these non-resident workers.
However, throughout the night, no relevant information was released by the government.
At the same press conference, Secretary for Security Wong Sio Chak said that no request to use the disaster shelter was received. Despite the justification, he added that his branch would follow up with the situation. He also pointed out that some non-resident workers “waited outdoors for their PCR results,” but did not address the fact that non-resident workers were taking naps without shelter in public.
Meanwhile, Secretary for Social Affairs and Culture, Elsie Ao Ieong, concurred with Wong’s comment, stating that no request had been received to open the shelters. She added, however, that received pictures of the scenes late Tuesday night she. She ordered “the competent bureaus” to open the shelters right away.
She stressed that “the shelters were not opened as per people’s requests but the government’s proactive response.”
Even so, she also did not address the lack of promotion regarding the availability of the shelters to non-resident workers.