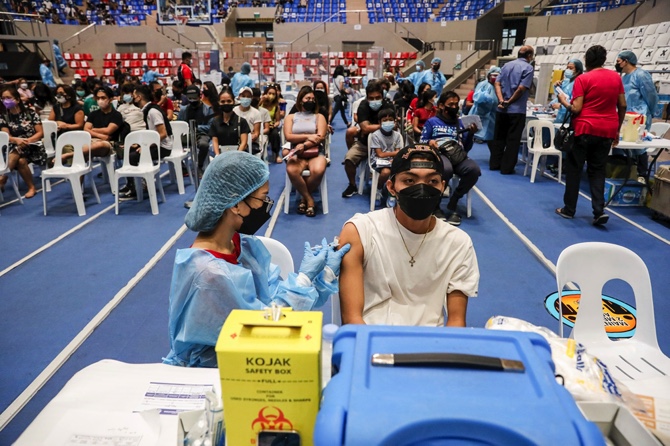 The positivity rate, or percentage of tested people whose results came out positive, also soared to 46%, another record high since the pandemic started two years ago.

Monday’s tally brings the Philippines’ total infection count nearer to the 3 million mark at 2,998,530. The death toll stood at 52,293 with 145 new deaths recorded.

Officials said they are assuming that local transmission of the highly contagious omicron variant is driving the current spike in cases.

Some experts have called for increased restrictions as cases surge and hospital operations are being hobbled by the number of infected health workers. But officials said on Monday that there is still no need to raise the alert to the fourth level of the five-step alert system.

The capital region Metro Manila and several provinces and cities are under under Alert Level 3 until January 15. Prohibited activities include in-person classes, live voice and wind instrument events, contact sport, and fairs. Operations of casinos and gatherings in residences of people who do not belong to the same household are also not allowed. Restaurants, gyms, barbershops, and other establishments can operate only at 30% capacity indoors for fully vaccinated customers and 50% outdoors. MDT/AP