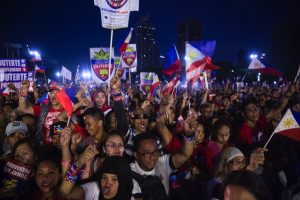 Philippine presidential candidates made a final push for votes in rallies on Saturday that drew thousands of supporters two days before the tightly contested election.
All five contenders held their final rallies in the capital, Manila. By 7 p.m. local time, police said about 300,000 supporters of front-runner Rodrigo Duterte, the firebrand mayor of Davao city, had gathered at Luneta Park, where Pope Francis delivered his Mass last year.
A recent opinion poll from Social Weather Stations puts Duterte, 71, in the lead with 33 percent of the votes in Philippines’ first-past-the-post system. He is ahead of Senator Grace Poe with 22 percent and Mar Roxas, a former interior secretary endorsed by outgoing President Benigno Aquino, with 20 percent.
Duterte’s tough talk, including calling for the extra-judicial killing of criminals, has been criticized by human rights groups, but his populist rhetoric to combat crime and deal with infrastructure backlogs has won him support among Filipinos.
Aquino made a last-ditch effort this week to get rival candidates, Roxas and Poe, to agree on a united front to prevent Duterte from winning. Roxas said on Saturday he’ll continue with his campaign after failing to convince Poe to combine forces against Duterte. Bloomberg