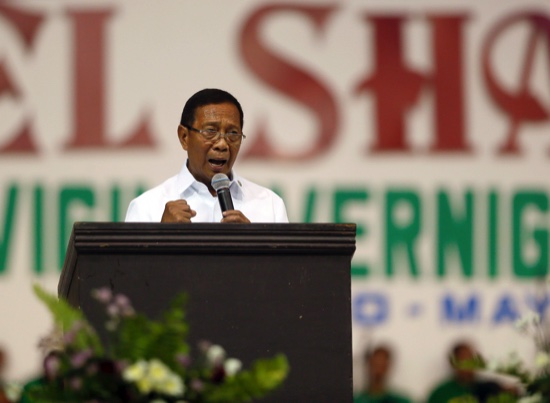 In a poor Southeast Asian country with a soft spot for the underdog, Philippine Vice President Jejomar Binay has tried to turn online jokes about his dark complexion and small stature to his advantage by portraying himself in campaign ads as an everyman who understands the struggles of the underclass.
But Binay, who is running fourth in opinion polls ahead of Monday’s presidential elections, is battling another image he says is a political smear — that of a corrupt bureaucrat who built a fortune from government coffers.
The country’s ombudsman plans to file corruption charges against Binay, 73, after he finishes his term as vice president based on an investigation into several contracts with alleged irregularities while he was mayor of Makati City, the country’s premiere financial district, including a 2.7 billion peso (USD58.7 million) parking building.
Images of his sprawling hacienda, with its air-conditioned pig farm, horse ranch, orchid farm and a garden inspired by London’s Kew Palace also were splashed on television screens during the year-long Senate investigation.
Binay denies amassing ill-gotten wealth, saying the contracts are in order, and his assets were mainly from the pig business he started in 1994 and the sale of properties he owned before he was elected mayor of Makati, which lies within metro Manila, in 1988.
The corruption talk is part of a “demolition job” and remain “mere allegations,” Binay told The Associated Press. “What I have done is I have uplifted the lives of everyone in Makati and I was able to make our city the richest [in the country].”
He boasts that Makati takes care of its residents from cradle to grave, offering free hospitalization, education, burial and senior citizens’ welfare. As a politician, he has cultivated ties with common people. He is known for attending wakes — 60,000 as of his last count — weddings, offering scholarships and donating money to the poor.
Binay supporter Leticia Toralba, a 57-year-old mother of six, says she doesn’t care about the corruption allegations because he has offered financial help to her family and others outside his city. Two of her children’s education was covered by scholarships that Binay maintains in several colleges.
“We owe him a big debt of gratitude,” said Toralba as she and some 200 supporters waited in the stifling heat for Binay to speak from a makeshift stage in Manila’s San Andres district. “We don’t care about the allegations of corruption against him. Even if he is corrupt as long as he is able to help the people, as long as he gives the money to the poor that is OK.”
As she spoke, Binay’s campaign song blared from two huge speakers, declaring that only Binay can make life better and who sends the poor to school. His television ads also say the poor can rely on “nognog” and “pandak” — pejorative tags that some have used in social media to refer to his dark skin and 5’3 feet (1.6 meter) height. By embracing those terms, Binay is identifying with the rural folk and working class who toil under the hot sun.
Binay — whose first name is a contraction of Jesus, Joseph and Mary — comes from humble beginnings.
Orphaned at a young age, he was raised by his uncle and used to feed the pigs in the backyard. He supported himself through law school, and joined street protests in the 1980s against dictator Ferdinand Marcos, serving as lawyer to Marcos’ human rights victims.
While he was a friend of President Benigno Aquino’s family for a long time, they ran on different tickets in 2010 and have since had a falling out. In the Philippines, the president and vice president are elected separately.
Binay declared his intention to run for president years ago, and surveys in 2014 showed him at the top of the heap. But his popularity has steadily declined as his image became tarnished by the corruption inquiry. The latest polls suggest Rodrigo Duterte, mayor of the southern city of Davao, is favored to win.
“In many ways Binay was a disaster waiting to happen precisely because he was on top of the game way before the official campaign started,” said Jayeel Cornelio, director of Ateneo de Manila University’s Development Studies Program. “Because he started too early, thinking that it would catapult him to the presidency, that eventually backfired because he opened himself up for all these attacks.”
But with his low poll numbers, Binay’s political career may be nearing its end, although his family dynasty may survive, Cornelio said.
“The truth is trial by publicity works in this country and at the end of the day it’s really all about the reputation,” he added. Teresa Cerojano, Manila, AP