Davao city Mayor Rodrigo Duterte has a strong lead in an unofficial count of votes for the Philippine presidential elections while a son of late dictator Ferdinand Marcos was leading in the vice presidential race.
After he voted yesterday, Duterte reached out to his opponents following a bruising campaign marked by tough, and sometimes foul, language from the mayor.
“I would like to reach, extend my hands to my opponents and […] let us be friends,” Duterte said in a news conference. “Let us begin the process of healing.”
The unofficial tally of partial results showed Duterte with 11.5 million votes and his closest competitor, Sen. Grace Poe, with 6.5 million.
In the separate vice presidential race, Sen. Ferdinand Marcos Jr. had 10.6 million votes and Rep. Leni Robredo had 9.7 million.
Weary of poverty, crime, corruption and insurgencies in the hinterlands, millions of voters are looking for a radical change at the top, and hope the man to lead it is Rodrigo Duterte, the 71-year-
old mayor of the southern city of Davao who has held a lead over rivals in all opinion polls.
An ex-prosecutor, Duterte peppered his campaign speeches with boasts about his Viagra-fueled sexual prowess and jokes about rape. But he also successfully tapped into discontent, and voters appear willing to overlook his unashamedly crude language.
“All of you who are into drugs, you sons of bitches, I will really kill you,” Duterte told a huge cheering crowd Saturday in his final campaign rally in Manila. “I have no patience, I have no middle ground, either you kill me or I will kill you idiots.” Statements such as these have won him the nickname “Duterte Harry,” a reference to the Clint Eastwood movie character “Dirty Harry.”
Voting at most of the 92,509 precincts nationwide started at 6 a.m. and ended at 5 p.m. Voting was extended by an hour in precincts that had opened three or more hours late because of technical or other problems.
Election results were not expected for at least 24 hours, perhaps longer.
Duterte, who has been compared to U.S. Republican presumptive presidential nominee Donald Trump, has threatened to close down Congress and form a revolutionary government if legislators stonewall his government.
This has alarmed the political establishment, which fears that Duterte will squander the hard-
won economic progress under outgoing President Benigno Aquino III. Aquino has called Duterte a threat to democracy, and likened him to Adolf Hitler. 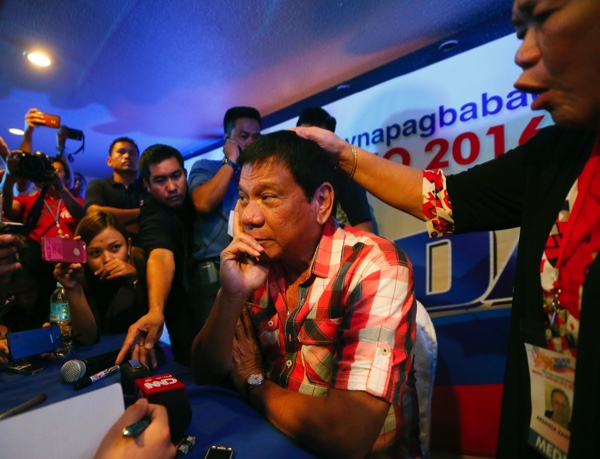 Front-running presidential candidate Mayor Rodrigo Duterte is prayed over by a supporter during a news conference shortly after voting in a polling precinct at Daniel R. Aguinaldo National High School, Matina district, his hometown in Davao city

Besides Duterte, former Interior Secretary Mar Roxas, backed by Aquino, and three other candidates are vying to lead one of Asia’s liveliest democracies.
At least 15 people were killed in elections-related violence and more than 4,000 arrested for violating a gun ban, according to police.
“Let us show the world that despite our deep passion and support for our candidates, we can hold elections that are peaceful and orderly and reflect the spirit of democracy,” said Aquino, who cast his ballot after standing in line for more than an hour with other voters in a Manila constituency.
About 55 million Filipinos registered to vote in 36,000 voting centers across the archipelago of more than 7,100 islands, including in a small fishing village in a Philippine-occupied island in the disputed South China Sea.
In final campaigning Saturday, Aquino warned voters that Duterte could be a dictator in the making and urged them not to support him. He cited the rise of Hitler as an example of how a despotic leader can gain power and hold on to it without public resistance.
Filipinos have been hypersensitive to potential threats to democracy since they rose in a 1986 “people power” revolt that ousted dictator Ferdinand Marcos, who faced allegations of plundering the poor country and condoning widespread human rights violations by state forces. In 2001, a similar uprising forced Joseph Estrada from the presidency over alleged large-scale corruption.
On the campaign trail, Duterte offered radical promises, including his bold anti-crime pledge and a plan to sail to China’s new artificial islands in the South China Sea and plant the Philippine flag there. The other candidates stuck to less audacious reforms.
Duterte’s opponents — Roxas, Sen. Grace Poe, Vice President Jejomar Binay and Sen. Miriam Defensor-Santiago — have all criticized him for remarks that threaten the rule of law and the Philippines’ hard-won democracy.
Financial market analysts are predicting that a Duterte win would weaken the Philippine peso given his uncertain economic platform.
The jitters have affected the Philippine stock market, which fell Friday — the last day of trading before the election holiday — for the 10th time in 11 days.
“The market is obviously emotional and the stronger emotion is usually fear rather than hope,” said Jose Vistan, research head at AB Capital Securities Inc. “A big chunk of the reason why we’re behaving the way we are is obviously because of the elections.”
“Duterte is completely out of the system, he’s out of the box,” said political science Prof. Richard Heydarian of De La Salle University in Manila, adding that in the mayor’s portrayal of social problems, “there is a gap between the rhetoric and reality but it’s working, it’s creating panic among a lot of people and rallying them behind Duterte.”
Duterte built a political name with his iron-fist approach to fighting crime in Davao, where he has served as mayor for 22 years. Human rights groups accuse him of carrying out extrajudicial killings of suspects to fight crime. During the campaigning he joked about wanting to be the one to first rape an Australian missionary who was sexually abused and killed by inmates in a 1989 prison riot.
Despite his devil-may-care way with expletives, obscene remarks and allegations of corruption hurled against him, Duterte has led in election polls by more than 10 percentage points over Roxas and Poe.
Aquino had a mixed record during his six-year term that ends in June. He presided over an accelerating economy, which had recorded one of the highest growth rates in Asia at an average of 6.2 percent between 2010 and 2015. He also introduced new taxes, more accountability and reforms, including in the judiciary, and cracked down on tax evaders.
But more than a quarter of the Philippines’ 100 million people remain mired in poverty, inequality is rampant and an immediate solution to decades-long Muslim and communist insurgencies in the south remains elusive.
Annual debt payments, some dating back to the Marcos years, and limited funds stymie infrastructure improvements and public services, including law enforcement, fueling frequent complaints. Jim Gomez & Teresa Cejojano, Manila, AP