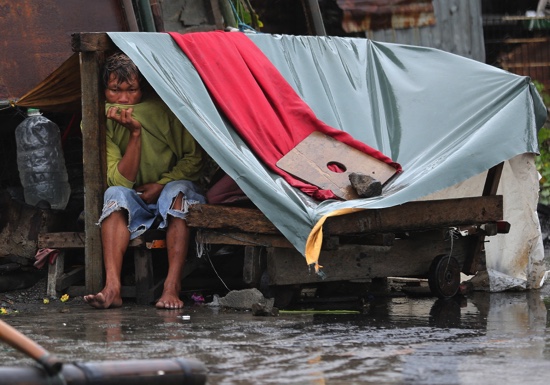 A Filipino man sits inside his makeshift home as strong winds and rains caused by Typhoon Koppu hits the coastal town of Navotas, north of Manila

Slow-moving Typhoon Koppu weakened after blowing ashore with fierce winds in the northeastern Philippines yesterday, leaving at least two people dead, displacing 16,000 villagers and knocking out power in entire provinces, officials said.
Army troops and police were deployed to rescue residents trapped in flooded villages in the hard-hit provinces of Aurora, where the typhoon made landfall early yesterday, and Nueva Ecija, a nearby rice-growing province where floodwaters swamped rice farmlands at harvest time.
After slamming into Aurora’s Casiguran town after midnight Saturday, the typhoon weakened and slowed down, hemmed in by the Sierra Madre mountain range and a high pressure area in the country’s north and another typhoon far out in the Pacific in the east, government forecaster Gladys Saludes said.
Howling winds knocked down trees and electric posts, leaving nine entire provinces without power, while floods and small landslides made 25 roads and bridges impassable. Authorities suspended dozens of flights and sea voyages due to the stormy weather, and many cities canceled classes today.
By yesterday afternoon, the typhoon had veered toward the north from a westward course and was barreling across mountainous Nueva Vizcaya province with sustained winds of 150 kilometers per hour and gusts of up to 185 kph, according to the government’s weather agency.
Satellite images showed that the typhoon appeared to be losing its eye, a sign of its dissipating strength, acting weather bureau chief Esperanza Cayanan said, adding that Koppu was forecast to move at a slow pace of 5 kph across the mountainous north before exiting the main northern island of Luzon on Wednesday.
While weather conditions had begun to improve in some towns, and villagers had started to clear roads of fallen trees and debris, Koppu still packed a ferocity that could set off landslides and flash floods, officials said.
“We’re asking our countrymen not to become complacent,” said Alexander Pama, who heads the government’s disaster-response agency, citing how rainwater could cascade down mountainsides after Koppu passed and flood villages.
That happened in low-lying villages in six towns in Nueva Ecija, near Aurora, where some residents were trapped on rooftops by floodwaters, said Nigel Lontoc of the Office of Civil Defense.
A teenager was pinned to death yesterday by a fallen tree, which also injured four people and damaged three houses in suburban Quezon city in the Manila metropolis. In Subic town, northwest of Manila, a concrete wall collapsed and killed a 62-year-old woman and injured her husband, Lontoc said.
Three fishermen who had gone missing at sea were rescued off northern Bataan province, and three other missing people were found in an evacuation camp in Aurora’s Baler town, he said.
President Benigno Aquino III and disaster-response agencies had warned that Koppu’s rain and winds may potentially bring more damage with its slow speed. But Saludes, the government forecaster, said that there was less heavy rain than expected initially in some areas, including in Manila, but that fierce winds lashed many regions.
Koppu, Japanese for “cup,” is the 12th storm to hit the Philippines this year. An average of 20 storms and typhoons each year batter the archipelago, one of the world’s most disaster-prone countries.
In 2013, Typhoon Haiyan, one of the most ferocious storms on record to hit land, barreled through the central Philippines, leveling entire towns and leaving more than 7,300 people dead or missing. Jim Gomez, Manila, AP