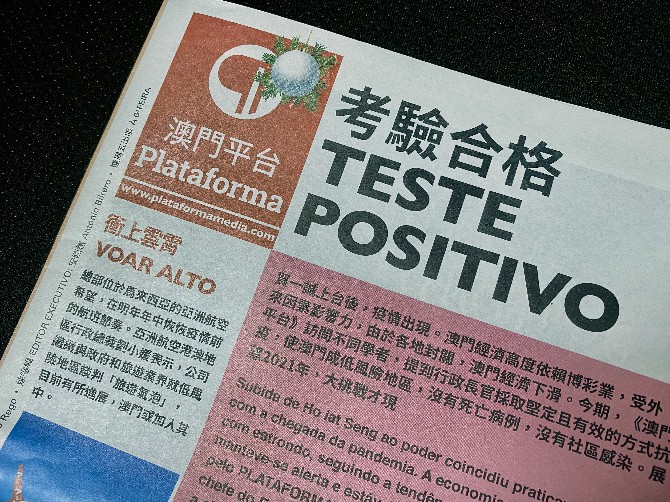 The media outlet Plataforma has temporarily suspended the operation of their online newsroom team based in Lisbon, Portugal, the Director-General of Plataforma, Paulo Rego, revealed in an editorial on Tuesday.
The online media company based in Macau, which is part of the Portuguese Global Media Group (GMG), owns the local weekly bilingual newspaper Plataforma Macau, published in Portuguese and Chinese languages with a particular focus on economic and cultural exchanges between mainland China, Macau and Portuguese-speaking countries.
According to Rego’s editorial, the decision to temporarily suspend the operations in Lisbon was based on an administrative decision from GMG which resulted in the removal of financial support for the team’s operations.
In the text, Rego publicly apologized for what he considers to be a big mistake from the GMG that shows a “lack of vision.”
“This intermission [in the Lisbon operations] is due to the failure of the GMG, which thus disrespects its professionals who migrated to Plataforma, betrays its future, and turns its back on the commitment to Macau and Kevin Ho – director of KNJ Investiment – who has invested in the digitalization and internationalization of GMG, based on the connection to Macau,” Rego wrote.
The director-general considered the move from GMG to be a step backward from the goals of the media and strategic vision of one of its major shareholder’s (Kevin Ho) rights to create a direction and establish objectives as previously agreed.
“GMG abandons its commitment to the Lisbon team, based on a tripartite agreement between Plataforma, GMG and the journalists that, with honor and pleasure, we hosted at our cost center,” he remarked leaving a message of hope for both the team and the readers by noting that is a temporary suspension and not an ending, and promising to resume the activities as soon as possible.
Plataforma operates mostly online (using a website and mobile application) which includes content in Portuguese, Chinese and English languages, and also incorporates cooperation with several other media outlets located in Portugal, Angola, Brazil, and Macau.
Back in October last year, Rego, a former non-executive member of the Board of Directors of GMG, resigned from the post after around three years serving as a board member.
He also served as vice-president of the Executive Committee for one year between November 2017 and November 2018.
His post was linked to the KNJ Investment Group, where he served as a representative of the Macau-based company which owns a total of 35% of GMG.
In Portugal, GMG is one of the largest media groups, owning 19 media outlets including newspapers, radio channels, and other media outlets.
Rego’s resignation from the role came right after the acquisition of 40% of GMG by Portuguese entrepreneur Marco Galinha, who leads the Portuguese business group, Grupo Bel.
Pursuing clarification on the case, the Times contacted both Rego and Galinha, who have not provided any comments by press time.