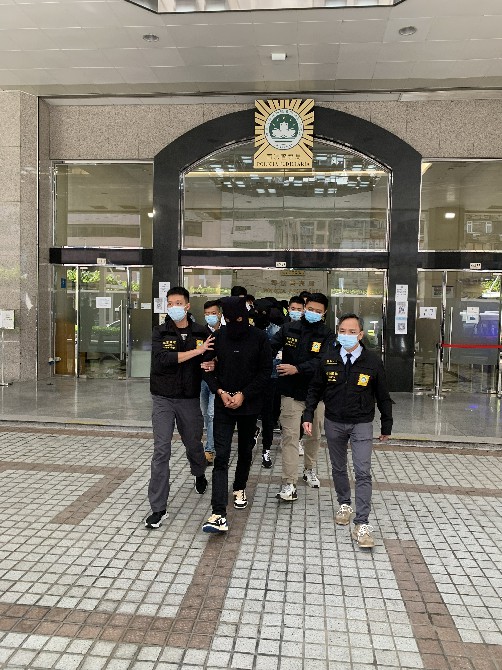 The head of the city’s biggest casino junket organizer is among the 11 suspects that have been arrested on charges of illicit gambling and money laundering.
Macau police has detained the head of Suncity Group, Alvin Chau, and others after Chinese authorities issued an arrest warrant for them over accusations that they ran an illegal cross-border gambling syndicate.
The arrests in the gambling enclave came after prosecutors in Wenzhou, in the eastern province of Zhejiang, on Friday accused Chau and another person, Zhang Ningning, of leading cross-border gambling operations and setting up casinos across China.
The suspects are aged between 30 to 56 years, the Judiciary Police (PJ) yesterday revealed in a special press briefing.
Most of them reportedly work as senior administrators, said local authorities.
Authorities said they had been investigating the case since July last year. They said that the gambling syndicate has 199 shareholder representatives, over 12,000 agents that promoted its gambling operations and more than 80,000 gamblers in its network.
During preliminary interrogations, suspects admitted to establishing overseas “gambling platforms”. However, they declined to cooperate with the investigations over other allegations.
As disclosed by the PJ, following the collection of intelligence, police discovered that the head of a criminal syndicate, “a local resident surnamed Chau,” made use of his junket business in Macau to set up “gambling platforms” overseas.
He also solicited mainland Chinese residents to gamble on these platforms.
The chief suspect transferred the revenue illegally earned from these platforms between jurisdictions through underground financial agencies and his junket in Macau.
In April 2020, the PJ upgraded the case to a special task.
This past Saturday, the PJ deemed it timely to apprehend the 11 individuals, who were arrested in a commercial building in the ZAPE District and Coloane.
The police have seized “a multitude” of computers, computer servers and data storage facilities as evidence. Approximately 3 million in Hong Kong Dollars and Macau patacas were also seized.
Investigations will continue, and the PJ will attempt to track down other individuals yet to be apprehended.
The press mentioned the name Suncity several times at the press conference and the PJ spokesperson neither admitted to nor denied any link between the suspects and the junket operator.
When asked whether the case is related to a recent arrest warrant issued by the authorities in Wenzhou, China, for Suncity CEO Alvin Chau, the PJ spokesperson reiterated that the investigations were commenced autonomously, with the apprehensions deemed timely by local police.
The police spokesperson added that the commencement of an investigation was prompted by intelligence they obtained. It is also a regular practice for the police to cooperate with other police authorities at the international level.
The chronological proximity between the mainland arrest warrant and the local apprehensions was merely a coincidence, the police’s spokesperson emphasised.
On whether these suspects will be handed over to mainland authorities, the PJ spokesperson stressed that all practices will be based on local laws and the decision of the judicial branch.
All suspects were transferred to the Public Prosecutions Office for further investigation.
Authorities in China, meanwhile, said the syndicate “severely damaged the social order of the country” and on Friday urged Chau to turn himself in in exchange for a more lenient punishment.

Financial services provider and analysts JP Morgan have suggested in a recent note that the arrest of Suncity boss Alvin Chau and possible subsequent crackdowns on the local junket market are unlikely to hit Macau’s already shrunk scale of operations hard.
However, the analysts of the brokerage said that it “wouldn’t be surprised to see junket VIP revenues [in Macau] immediately contract in the coming weeks,” as cited in a report by GGRAsia.
This amount could lead to “perhaps by 30% to 50% from current run-rates.”
According to the brokerage, the arrest is “really bad for the junket/VIP” gaming sector in Macau.
The reason that the arrest is negative for the sector, according to JP Morgan, is because it may affect investor confidence amid the relicensing of local gambling concessions.
“While the news is only directly related to junket/VIP, some investors may interpret this as a signal of a potentially broader clampdown on gambling itself, a view that we don’t agree with but cannot disprove,” the brokerage noted in the statement.
Analysts DS Kim, Amanda Cheng and Livy Lyu added: “The fact that even he can be arrested – for just running the junket and doing [what seems to us like very] normal junket activities – should send a chill down the spine of any and all junkets.”
The brokerage stressed that the recent arrest warrant issued by authorities in Wenzhou of Zhejiang Province in China confirm that Macau is considered an external region in the country’s war against cross-boundary gambling activities and solicitation. AL