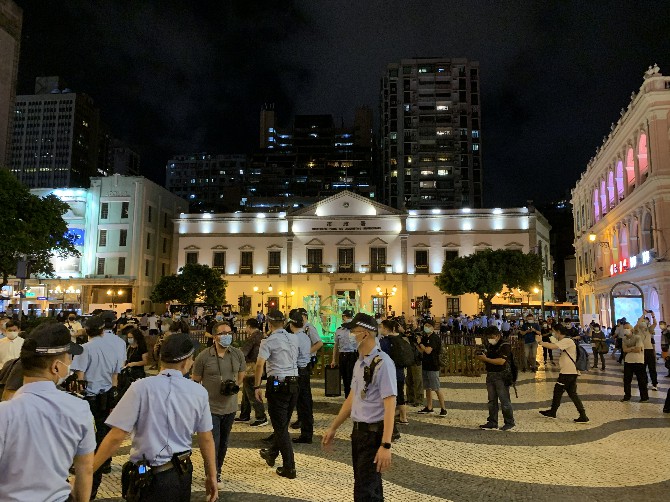 In his capacity as a member of the Macau Union of Democratic Development, lawmaker António Ng Kuok Cheong announced that the Public Security Police Force (PSP) has banned the group’s right to hold this year’s June 4 vigil.
The union has been the organizer of June 4 related events in Macau for the past 33 years, including in 1989.
Ng made the announcement on his social media platform, saying that the police have “declined [the application for] the June 4 Vigil, citing alleged offense against public power and Covid-19 control as an excuse.”
He pledged that the group will “file an appeal with the Court of Final Appeal as soon as possible.”
Telephoned by the Times to verify the matter, lawmaker Au Kam San, who is also a member of the union, confirmed the existence of the PSP ban.
He was asked to reveal the actual reason listed in the dispatch issued by the PSP, since Ng’s social media post was terse and appeared to be abridged as a result of rephrasing.
Au explained that the PSP cited several laws as grounds for barring the vigil. “They said the vigil is [thought] to violate Articles 177, 181 and 298 of the Penal Code, as well as the Principal of Goodwill of the Code of Administrative Procedure,” Au revealed.
Laws related to political assemblies in Macau ban assemblies with themes or topics proscribed by other Macau laws.
Ng, meanwhile, stated that “it is a political persecution when the law has not changed and the event has been held since the start of the SAR,” noting that current Penal Code was passed in 1995.
When questioned about the matter by the Times, lawyer Vítor Tang described the articles cited by the PSP as “serious stipulations.” “Article 298 of the Penal Code is an extremely serious crime,” he said. “It is related to instigation of overthrowing an established system.”
The aforementioned article is closely related to its preceding article, which is a statute concerning the devastation, alteration or subversion of the political, economic and social systems in Macau.
Inciting people to the acts listed in Article 297 (which is the core of Article 298) incurs a liability of imprisonment for one to 10 years, depending on the severity of the crime.
Meanwhile, Article 177 is related to crimes of libel and defamation, as well as the dissemination of libelous and defamatory materials. Furthermore, Article 181 stipulates the punishment for the assertion or dissemination of information sufficient to violate the credit and prestige of certain entities, including, but not limited to, the public administration entities.
Former journalist Roy Choi Chi Chio expressed his pessimism on his social media account. “Simply put, Hong Kong and Macau can no longer voice out for China’s democracy,” he wrote.
He called the decision “political” and looked forward to the result of the appeal.
Lawmaker Sulu Sou was confused at the decision. “It was unheard of and unprecedented,” he said.
Academic Eilo Yu, on the other hand, pointed out that it is a phenomenon that Beijing would apply pressure on the Special Administrative Regions when “it sees something that it doesn’t want to.”