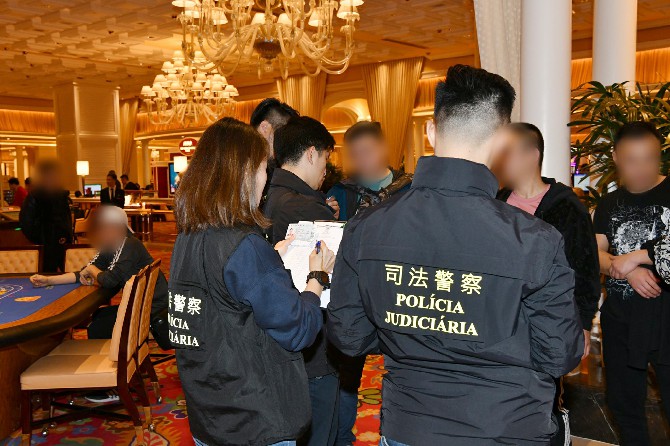 The Judiciary Police (PJ) has arrested three suspects for carrying out illegal currency exchange activities in casinos.
The arrests were made during a nighttime operation conducted by the force on December 14 and 15, which targeted casinos in the Outer Harbor area.
According to the PJ, the police deployed 42 inspectors who questioned a total of 157 people. They found one man and two women who were suspected of being involved in the illegal activities.
During the investigation, another man was found to be overstaying as his visa had expired.
The four were detained and brought to the PJ headquarters for further investigation. After the operation was completed, they were handed over to the immigration department of the Public Security Police Force for deportation.
The number of illegal currency exchange cases has grown since know-your-customer facial recognition technology was installed in Macau’s automated teller machines in early 2018.
According to official crime reports, over the last few years, this activity has become one of the most common types of fraud.
The PJ also conducted another operation on December 14, seeking to detect illegal hostels and ultimately have their operations cease.
The operation was conducted from 2 p.m. to 9 p.m., and the PJ detained three suspects. The woman and two men who were arrested were all from the mainland, and were suspected of being involved in the illegal business.
During the course of their investigation, the PJ decided that there was not enough evidence against the suspects, so they were freed after the investigation procedures were completed.
The case was then turned over to the Macau Government Tourism Office, who confirmed that the units inspected were being used as illegal hostels and that they had seized the apartments.