Policy Address | André Cheong: 2022 will mostly be a year of continuity 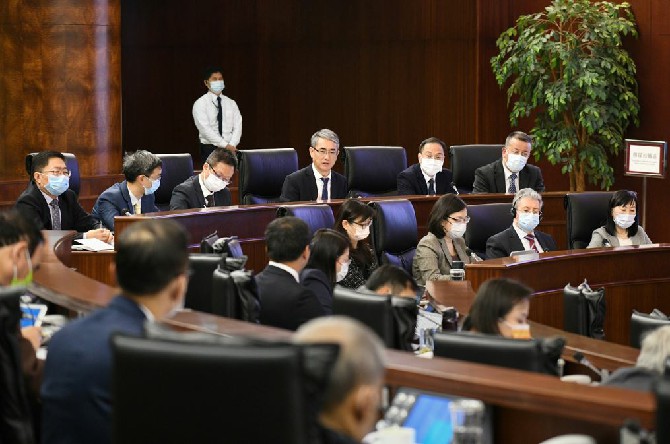 Despite the large number of items mentioned in the presentation of the Policy Address for 2022 (LAG22) for the Secretariat of Administration and Justice, Secretary André Cheong noted that the Departments and Bureaus under his Secretariat will spend most of 2022 continuing projects begun this year or even back in 2020.
Without any major new announcements at the Legislative Assembly (AL), yesterday, Cheong opted instead to evaluate the work undertaken this year, noting that, in many cases, initiatives which have already been announced will continue for two or more years.
Cheong mentioned the continued reform of public administration and the introduction of several new regulatory regimes. Among the latter is a new law aiming to solve problems caused by water infiltration to buildings: a much-discussed topic in the AL in the past. Cheong also mentioned several government projects which aim to improve public and leisure areas as well as the functioning of public markets.
Although most of the lawmakers did not disagree with any of the policies presented, most of them expressed concerns about the vagueness of the policies: since the government has stated its objectives but not explained clearly when or how it will achieve them.

Water infiltration law to be introduced Q4
A new law aiming to mitigate the problem of the water infiltration in buildings and promoting “quicker ways and add powers to government entities to tackle these problems” is in train and will be likely be introduced the AL for discussion and approval on the last quarter (Q4) of next year.
Although few details of the legislation have been advanced, the Secretary said that it aims to solve or at least facilitate the actions of the government authorities on this matter.
The issue of water infiltration has been brought countless times to the AL plenary session in the form of inquiries to the government from former lawmaker Mak Soi Kun and most recently for lawmaker Zheng Anting.
In the past, Mak has called on the government to amend existing regulations to allow the government to enforce measures such as stopping water and energy supply to the units suspected of leaks in case the owners refuse to cooperate with the authorities in finding and repairing the leaks.
Waste collection system to be replaced
A novelty when introduced a couple of years ago, the waste collection system which was installed in the Areia Preta district and which never entered operation, will finally be replaced, the Secretary for Administration and Justice revealed.
The system based on the underground deposit system was never put into use because the company which manages the waste collection and treatment never acquired the specific equipment necessary to operate it. It will be replaced by a “pressure” system, the Secretary revealed, retiring the novel collection bins that were installed but have been out of service for several years.
No information was provided on how much money was spent on the now obsolete system.

Markets to operate on a single weight unit
One of the new initiatives announced by Cheong is the enforcement of the requirement for sellers operating in public markets to use the same and only one mass unit to weigh the products.
The new regulation, to be enforced in phases, aims to unify all the types of measurements and units in use, from Grams and Catty to Pounds, among others.
The government wants to turn all these units into a single one using the metric system and electronic scales to prevent confusion and any potential infringement of consumers’ rights.
The price system and reference prices for the most sold items will need to be displayed following the new system so that consumers can effectively compare the price of the products they are acquiring, namely fresh produce, seafood and meat.

Leisure areas in demand
During the long session on Wednesday, several lawmakers questioned the Secretary on the construction of leisure areas and other public spaces.
While Cheong noted that the second phase of the so-called “green corridor of the South Coast of the Peninsula” will begin development, to link the Statue of Goddess Kun Iam to the area of the Macau Tower next year. Lawmakers criticized the slow progress of projects such as the linking of the bicycle and running path in Taipa’s coastal area to the path in the Lotus Flower area.
On the topic, Cheong explained that there are some issues to be solved in that area since “this includes two separate land plots which need to be connected via a bridge.” He noted that the government is working to complete the paths as soon as possible.
Questions were also raised by lawmaker Leong Sun Iok about the former Canidrome area but the Secretary refused to expand on the matter, claiming that the project is the responsibility of other Secretariats.

Regime of responsibility excludes senior officials
The government has not yet published details of the regulatory regime for financial mismanagement by public officials which it plans to introduce to the AL. Nevertheless, according to the presentation made by the Secretary, the proposed legislation is likely to exclude senior officials, focusing only on mid-level bureaucrats.
The proposed laws concern the responsibility of public officials for misconduct or errors of judgment causing severe loss of public funds.
Questioned on the matter, the Secretary did not clarify whether that decision is final but noted that there is already a regime establishing criminal responsibility in severe cases such as corruption and other matters of impropriety, hinting that the new regime will apply only to the mid and lower-ranked officials.
Lawmakers also expressed concerns about the fact that of the 17 new laws and law amendments due to be deliberated next year, two-thirds are expected to be introduced to the AL on the last quarter of the year.
Lawmakers are concerned that this will cause an overload on the work for AL and, thus, discussion of these bills, which are of great public importance, will be unduly rushed.