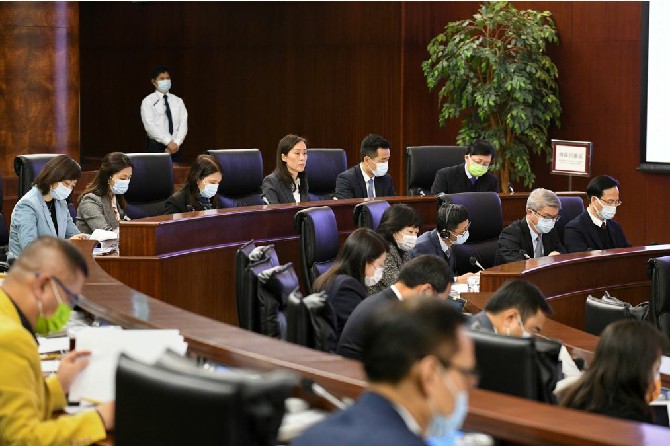 As the government previously designated the Peking Union Medical College Hospital (PUMCH) as the operating entity of the future Island Hospital Complex, medical specialists from the Beijing hospital will be invited to educate local medical professionals, Secretary for Social Affairs and Culture Elsie Ao Ieong said yesterday.
Despite this designation and “hope”, the PUMCH has not been notified regarding talent cultivation.
In her Policy Address yesterday Ao Ieong said that meetings will be held with the teams at the PUMCH to determine and clarify details of the appointment.
Prior to the opening of the Island Hospital Complex, local medical doctors will be trained at the Beijing facility to ease their transition into the future local hospital complex.
A specialist team at the PUMCH will help train specialist doctors, which Ao Ieong emphasized the city is lacking the most in.
Ao Ieong disclosed that the city has 2.6 doctors per 1,000 residents, which is not low compared to levels in neighboring regions. However, the city has been lacking specialist doctors, and she hopes that, with the introduction of the PUMCH teams and services in Macau, this gap can be filled.
She added that, apart from the PUMCH teams, in the future local specialist doctors could also be trained locally by foreign professionals.
With the PUMCH selected as the operating entity of the future medical facility in Cotai, Ao Ieong said that the medical team at the hospital complex will not be comprised of civil servants, in contrast to most workers at public Conde de São Januário Hospital (CHCSJ), who are within the public service structure.
She disclosed that the government will make new laws and regulations, as well as a new management entity to handle administration of the new Cotai medical facility.
In the early phase, the new facility will have an oncology center, a cardiology center and a brain center, among other specialist centers.
Also on talent cultivation, lawmaker Pang Chuan expressed his concern with working visa for visiting professors. He pointed out that it could be difficult to introduce such professors to work in Macau due to procedural matters.
On this, Lou recapped the legal requirements and procedures for such introduction. He added that the education bureau last year expressed relevant requests to the Labour Affairs Bureau and the Public Security Police Force, which Lou said have the discretion to issue special arrangements.
Ao Ieong added that local higher education institutions are offering or will offer programs or courses that appeal to the city’s need and direction to diversify its economy and nurture future pillars of the society.
For example, she said, the future Macau Polytechnic University is offering AI courses and the Macao Institute for Tourism Studies will offer post-graduate courses co-operated with the UN.

AI to help homework placement, grading
The Secretary announced that, in the coming year, some Macau schools will introduce an increasingly popular Artificial Intelligence (AI) platform developed in mainland China to help teachers.
The program will help teachers formulate test papers and homework. Surprisingly, the platform will also be able to help teachers grade English compositions. “Last time, when I was here to discuss the platform, it could not yet grade compositions,” she said.
The platform, which is part of the government’s “smart campus” initiative, will be available in 10 schools during the early phase. It will later be rolled out across all schools.
Ao Ieong also used this announcement to clarify that the definition of small classroom in Macau is a class sized between 25 and 35 students. The 10-student buffer zone is set to avoid insufficient enrolment because the birthrate of Macau fluctuates each year. For example, the indicator has been falling in recent years.
“Kindergarten teachers will become jobless if there is a year with only 3,000 newborns,” she said, framing the buffer zone as legitimate that will help preserve subsidies for nurseries and kindergartens.
“Otherwise, we may need to close schools.”
Lawmaker Lam also asked about the rise in higher education tuition fees. He sought clarification from the government about why it could not raise the fees for non-local students to compensate for rising costs.
Lou Pak Sang, director of the Education and Youth Development Bureau (DSEDJ), said in response that there are differences in the tuition fees for local and non-local students. He did not explain why Lam’s suggestion was not feasible.
Several lawmakers asked the officials about education issues. When asked why school construction was moved from the original Canidrome land plot, Lou said that the replacement land plot in the New Urban Zone A is much larger than the Canidrome area.
He disclosed that a mixed education school would only have a campus measuring 2,500 square meters at the former Canidrome site, and that it would double by being moved to Zone A.

Mental health support provided on 24/7 basis
Questions regarding mental healthcare were raised by several lawmakers, concerning the number of suicides that have occurred in the past two years.
As the cases have happened in nearly all age groups, Chui Sai Peng asked: “What have, or have we not done to prevent or improve the scenario?” Kou Kam Fai inquired into policies to improve mental support to younger generations.
Ao Ieong emphasized that work has always been done to provide good mental healthcare in the city, regardless of age. Cooperation with non-government entities has also been utilized.
She asserted that the provision of assistance occurs “24/7”, highlighting the healthcare systems lack of off time. “If we see problems, we provide help regardless of time and channels,” she said, adding that the channels include phone calls, online chatting and personal meetings.
Ao Ieong disclose that, as of November 15, 87 cases have been handled, of which about 50 were of a severe nature.