Pope urged to avoid ‘supermarket of religions’ in Kazakhstan 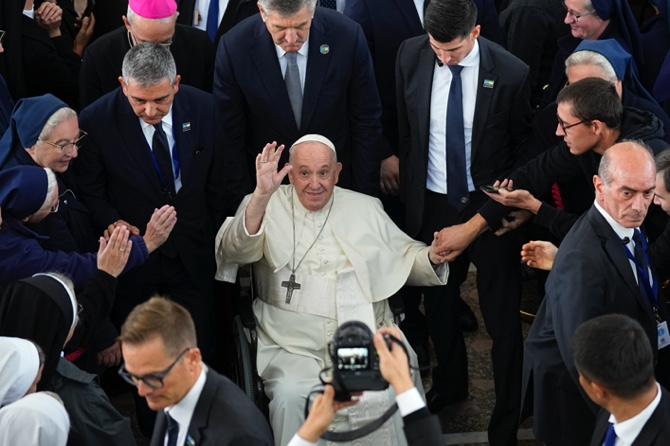 Pope Francis waves at the end of a meeting with priests, religious men and women, seminarians and catechists at the Our Lady Of Perpetual Help Cathedral in Nur-Sultan, Kazakhstan, yesterday

Pope Francis reaffirmed the critical value yesterday of interfaith dialogue to contrast the “folly of war,” even as one of his own bishops warned that Francis’ participation in a big interfaith peace conference in Kazakhstan could imply papal endorsement of a “supermarket of religions.”

Francis delivered the closing speech to the Kazakh government’s triennial conference of traditional religions, which gathered some 80 Muslim, Christian, Jewish, Buddhist and Taoist faith leaders who called for greater interfaith efforts to combat war, poverty, climate change and other ills facing the world.

Francis praised the summit and underlined its conclusion that religion can never be used to justify war — a call that came against the backdrop of the Russian Orthodox Church’s support of Moscow’s invasion of Ukraine. The final document says “extremism, radicalism, terrorism and all other forms of violence and wars, whatever their goals, have nothing to do with true religion and must be rejected in the strongest possible terms.”

Without mentioning Russia or any other warring country by name, the final document calls on world leaders to “abandon all aggressive and destructive rhetoric which leads to destabilization of the world, and to cease from conflict and bloodshed in all corners of our world.”

Francis told the gathering that interfaith encounters such as the Kazakh summit are “more valuable than ever in challenging times like our own, when the problems of the pandemic have been compounded by the utter folly of war.”

With a delegation of the Russian Orthodox Church at the table, Francis said peace was “urgently needed.”

“We plead with you, in the name of God and for the good of humanity: Work for peace, not weapons! Only by serving the cause of peace, will you make a name for yourselves in the annals of history,” he said.

A note of caution, however, came from Bishop Athenasius Schneider, the auxiliary bishop of Astana and one of Francis’ most vocal critics. Schneider has joined other traditionalist and conservative cardinals and bishops in criticizing several of Francis’ signature gestures and what they say are his doctrinal ambiguities on issues such as divorce and remarriage, homosexuality and interfaith outreach.

As an auxiliary bishop of Kazakhstan’s capital, Schneider had to help play host to Francis during his three-day visit and had a prominent role in the pontiff’s Thursday morning visit to the capital’s cathedral. He accompanied Francis’ wheelchair down the aisle at the start of the meeting and introduced a line of dignitaries who met the pontiff afterward, serving as translator.

But Schneider has also joined American Cardinal Raymond Burke in criticizing a landmark 2019 document Francis signed with the grand imam of al-Azhar university in Cairo which, among other things, said that all religions are “willed by God.” Some Catholic critics have said the idea that God actively wanted a plurality of religions could lead to relativism that would accept that all religions are equally valid paths to God, when the Vatican holds that Catholicism provides the only true path to salvation.

The so-called “Human Fraternity” document was held up as an example of “great historical significance” by Kazakhstan’s president at the start of the interfaith conference, and the final communique recognized its “importance and value” in calling for “peace, dialogue, mutual understanding and mutual respect among believers for the common good.”  NICOLE WINFIELD,NUR-SULTAN, MDT/AP