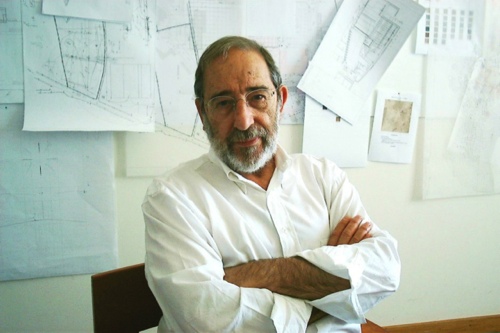 Renowned Portuguese architect Siza Vieira will be in Macau on Monday, after his visit to China, where he is set to inaugurate his latest project: an office building sitting on an artificial lake in Huaian, Jiangsu province. The architect is also set to work on a renovation project of local Macau hotel “Sun Sun,” newspaper Tribuna de Macau reported.
Álvaro Siza Vieira is one of Portugal’s most recognized architects. He won the Pritzker Prize in 1992 for Portugal’s pavilion in Expo ’98 and in 2012 he was awarded the Golden Lion for lifetime achievements at the Venice Biennale.
The office building in Jiangsu province is the architect’s first project in China. Siza was commissioned to design the 10,000-square-meter building by a company from Taiwan with offices in Huaian. It took four years to be designed and built.
The building was designed by Siza in collaboration with architect Carlos Castanheira. Both will be attending the inauguration, which is taking place this coming Saturday. “We have been [present] in Asia for ten years. First, [we were] in Japan, later in South Korea, and now [we are] in China,” Castanheira told Portuguese broadcaster Radio Renascença.
On Monday, Siza Vieira and photographer Fernando Guerra will be in Macau for Macpro Gallery’s upcoming photography exhibition, titled “Shadow of Light – Portraits of Álvaro Siza by Fernando Guerra.”