President gets tough as USD75b in casino value wiped 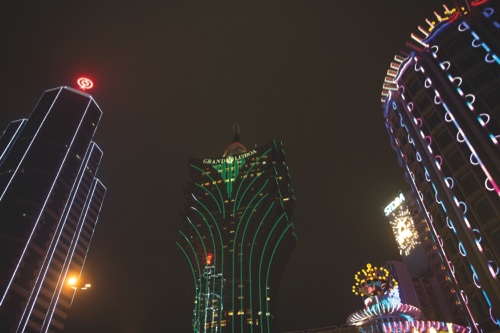 The Casino Grand Lisboa, center, and Casino Lisboa, right, both operated by SJM

During Xi Jinping’s first visit to Macau as China’s president, the city’s casinos would like to hear a reassuring word that might revive their tumbling stock prices. They’re not likely to get it.
Xi is the man responsible for the two-year campaign against corruption in China, scaring away high rollers who have helped make Macau the world’s largest casino gambling hub and wiping out USD75 billion of casino operators’ market value – bigger than the entire economy of Luxembourg.
Macau, half of the size of Manhattan and the only place in China where casinos are legal, is viewed as a conduit for officials and businessmen to bypass currency controls and send money out of the mainland to safer havens. While anti-graft campaigns have been short-lived in the past, Xi is stepping up the effort in a bid to bolster the legitimacy of the ruling Communist Party.
“It’s more important for China’s government to see Macau in a healthy economic development, and the reliance on corrupted official gamblers is not healthy,” said Chen Guanghan, deputy director of the Chinese Association of Hong Kong and Macau Studies, a policy research institute backed by China’s government.
An editorial posted on the official Xinhua News Agency website late on Thursday said the central government’s strategy is for the diversified development of Macau’s economy, to overcome the city’s constraints and challenges to its growth.
A separate editorial published in China’s military newspaper last week said Xi’s determination to rid corruption is “unswerving” and that it’s a “mistake” to believe the campaign is coming to an end. In Macau, the authorities will start cracking down on illicit funds funneled through the territory, which sent casino shares plunging on Dec. 17.
Macau’s six major casino operators have lost about USD75 billion in market value so far this year, based on the Bloomberg Intelligence Macau Gaming Market Index.
Among the companies, gambling mogul Stanley Ho’s SJM Holdings Ltd. is the biggest casualty with shares dropping 52 percent. The companies of billionaires Sheldon Adelson and Steve Wynn recorded an almost 40 percent decline.
High-rollers, or VIP gamblers, make up about two-thirds of Macau’s billion-dollar gaming market that contributed more than 80 percent of the city’s total revenue last year. Xi’s clampdown caused Macau’s first year-on-year economic contraction since 2009. Now, the city is bracing for its first ever annual decline in casino revenue after posting losses for six straight months.
There had been industry expectations that the government would make it easier for mainland Chinese to cross the border and visit casinos after extending opening hours at borders linking Macau with the neighboring Zhuhai city.
China instead came up with more restrictions in recent weeks. Starting this month, it tightened rules for the transit visas issued for Chinese visitors entering from Zhuhai, closing a prior loophole used by many high-end players to go to the city more often and stay longer than normally allowed.
The stricter rules could add pressure on Macau’s mass- market gaming revenue, Barclays analysts led by Phoebe Tse has said. In response to the VIP decline, companies including Sands China Ltd. and Galaxy Entertainment Group Ltd. have been building new resorts and shifting resources to target vacationing, mass-market gamblers.
The dominance of the casino gambling industry doesn’t meet Macau’s overall interest, and the city can’t only focus on its own economic growth and tax revenue, state-controlled TDM reported this month, citing Li Fei, deputy secretary general of the National People’s Congress, China’s top law-making body.
“The booming casino industry is definitely a money machine, but at the same time it’s enlarging the social income gap that could damage social stability,” said Chen from the China-backed policy research institute. MDT/Agencies