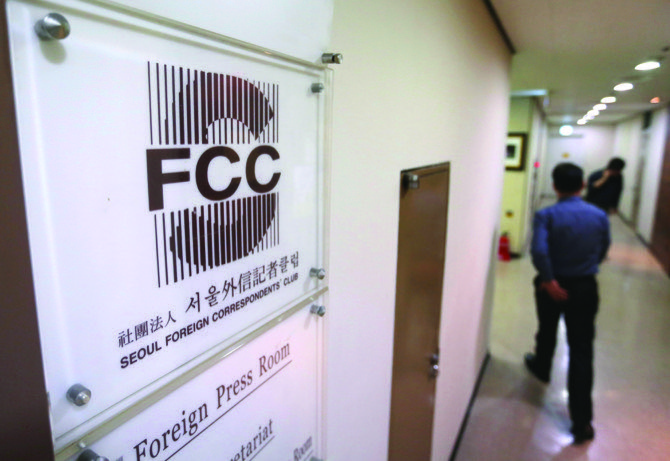 International journalists’ organizations are criticizing the status of press freedom in South Korea after the country’s ruling party singled out a Bloomberg reporter with South Korean nationality over what it claimed was a “borderline traitorous” article insulting President Moon Jae-in, resulting in threats to the reporter’s safety.

The Democratic Party initially said yesterday that it had no immediate plans to withdraw a March 13 statement by spokesman Lee Hae-sik, who attacked the reporter by name over a September article whose headline described the liberal Moon as acting as the “top spokesman” of North Korean leader Kim Jong Un at the U.N. General Assembly.

However, hours later, Lee said in an email that the party has decided to remove the reporter’s name and personal details from the statement and that it apologizes to members of the foreign press “if it caused misunderstanding.”

Lee also on March 14 attacked a New York Times article published last October that said Moon was serving as Kim’s “agent” while advocating diplomacy with North Korea. Lee tried to discredit the Times story by bringing up its South Korean author’s nationality. Lee said it was “merely an article written by a black-haired wire reporter,” but didn’t call out the writer by name. In South Korea, the expression “black-haired” is commonly used in nationalistic insults against South Koreans working for foreign companies who are said to be disloyal to the country.

After refusing to comment on the issue for days, Moon’s office released a statement Tuesday evening saying that the government fully guarantees freedom of the press and “cannot accept any circumstances where a reporter’s personal safety is threatened.”

The ruling party statements by Lee came in response to a parliamentary speech last week by conservative lawmaker Na Kyung-won, who borrowed the Bloomberg headline to criticize Moon’s diplomacy with North Korea following the collapse of last month’s summit between Kim and U.S. President Donald Trump.

The Asian American Journalists Association expressed “deep concerns” about the treatment of the Bloomberg journalist, saying that her safety was under threat “simply for doing her job.”

“That she is being targeted by members of the South Korean government is also troubling,” the AAJA said. “Threatening or intimidating journalists is unacceptable. Such activities have a chilling effect and undermine the freedom of the press for all journalists working in Korea.”

AAJA-Asia and its Seoul subchapter, as well as the Seoul Foreign Correspondents’ Club, have also issued statements expressing concern over the Democratic Party’s statement, which the SFCC described as a “form of censorship and journalistically chilling.”

In the email, Lee said the March 13 statement was chiefly aimed at Na and that the party has the right to criticize the work of journalists. Lee said there was “room for self-reflection” on whether it was appropriate to describe the Bloomberg article as “borderline traitorous” and that he acknowledges he may have caused “inconvenience to the reporter, and depending on the person, psychological shock.” He said the party still views the headline as “clearly over the line” in terms of journalistic objectivity. Concerning the “black-haired wire reporter” comment, Lee said the expression “has nothing to do with racial prejudice” and it is a “political term” commonly used by South Korean internet users.

In a country deeply divided along ideological lines, being described as North Korea-friendly is a sensitive accusation for liberal politicians like Moon, who has been unwavering in his commitment to inter-Korean rapprochement, even in the face of North Korean threats. Moon has lobbied hard to set up nuclear diplomacy among Washington, Pyongyang and Seoul.

In an effort to keep the fragile diplomacy alive, Moon has tried to improve Kim’s image and portray him as a credible diplomatic counterpart, describing him as a “candid and polite” leader who sincerely wanted to trade away his nuclear weapons to bring economic prosperity to impoverished North Koreans. Experts say the breakdown of the Trump-Kim talks has raised further doubts about Moon’s claim that Kim is genuinely interested in dealing away his nuclear weapons.

The presidential Blue House responded sharply to Na’s comments, calling them an insult to both Moon and South Koreans who want peace. During her parliamentary speech, Na said, “Please ensure that we never again hear the embarrassing talk that the president of the Republic of Korea is the top spokesman of Kim Jong Un,” referring to South Korea by its formal name, as Democratic Party lawmakers began shouting at her.

While criticizing Na, Lee described the Bloomberg reporter’s article as “borderline traitorous content that insulted the head of state while wearing the cloak of a U.S. wire service.” Kim Tong-Hyung, Seoul, AP