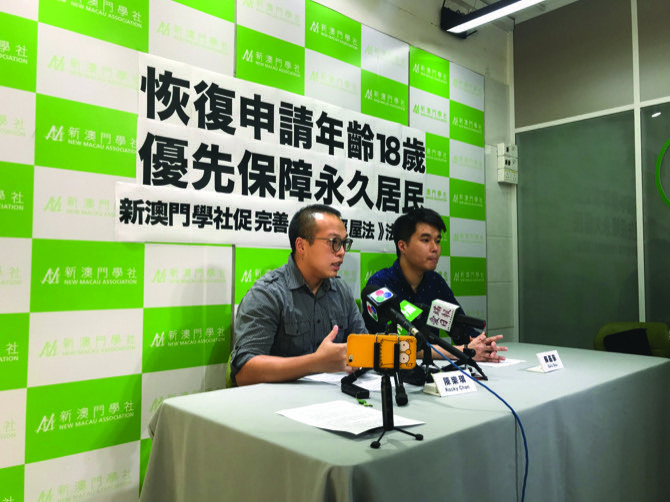 The New Macau Association (ANM) is making proposals to the government regarding the social housing act and economic housing act bill.

Yesterday, members of ANM reported details about their proposals to the media.

The four proposals are: to keep the age limit for both social and economic housing at 18 years old; to lift the prohibition of single people applying for social housing; at least half of any family group applying for economic housing must be permanent residents of the SAR; affordable house eligibility should be point-based, meaning that applicants should be ranked based on their evaluation points; and to recover the waiting list mechanism.

As Rocky Chan, member of ANM, explained, the age limit is discriminatory towards youth below 25 years old.

“If the government exclude adults aged below 25 years old from applying to affordable houses, it practices an absolutely differential treatment and discrimination, as it triggers an unnecessary opposition between the government and the youngsters,” Chan said.

Previously, in January, lawmaker Sulu Sou, who is also a member of ANM, called on Chief Executive (CE) Chui Sai On to allow the Legislative Assembly (AL) to debate the housing bill amendments. More than three months have gone by since then and the CE has not yet given Sou a reply.

“The bill involves governmental policies; therefore, lawmakers’ proposals must be first be approved by the CE,” said Sou. “Theoretically, the CE does not need such a long time to consider; he could have replied already. However, as of this moment, we have not received any news.”

“According to our understanding, the major responsible person for the bill, including the Secretary, has not received any news. We will continue following up the CE’s office,” said Sou.

“These questions were all voiced. Regarding my proposal, the one about half of the applicants having to be permanent Macau residents, it was completely supported by government representatives during the meeting,” said Sou.

Currently, the AL is waiting for the government to deliver statistics concerning the residency of affordable house and public house applicants.

Regarding the age limit, Sou indicated that the majority of the lawmakers and local groups agree to maintain it at 18.