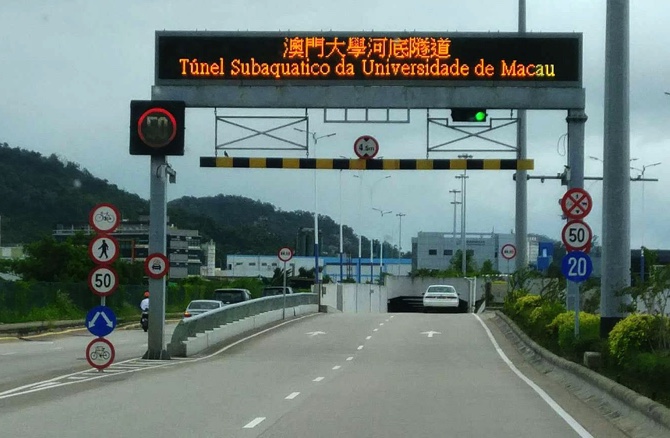 The tunnel connecting Taipa to the Hengqin campus of the University of Macau, which has been in operation since 2013, will undergo a repair project due to long-lasting water leaking problems.

Yesterday, the Infrastructure Development Office (GDI) received 14 bids for the project. In total, there are two phases leading to the completion of the project, involving a total of 700 construction days.

The underwater tunnel has two vehicle lanes, one pedestrian lane and one pipelines lane.

During the first phase, lanes from UM to Taipa will remain closed. It is estimated that the construction will start in the first quarter of 2020.

During the construction, the government will keep one lane open for public access.

The project involves repairing two lanes: one car lane and one pedestrian lane. During the repair period, construction workers will demolish the wall surface of the tunnel for infrared detection of large-scale structural leakage. The project also involves replacing and upgrading electromechanical systems, expansion joints, fire protection systems, resurfacing roads and other structures that are naturally aging.

The tunnel is 1,570 meters long. In 2010, GDI’s estimated cost of the underwater tunnel was 500 million patacas. Just one year later, in November of 2011, the budget for the tunnel went up to two billion patacas, which is more than triple its original price.

According to the government’s original plan, the tunnel is supposed to have a life span of 100 years, with seismic fortification standards for seven-degree fortification. In addition, the tunnel’s original design suggests it can face strong flooding conditions.

However, since the beginning of its operation in 2013, the UM tunnel has been troubled with water seepage and is frequently undergoing emergency repairs.

In February 2017, a water pipe burst inside the tunnel.

As early as July 2012, when the tunnel was still under construction, a serious collapse occurred inside the tunnel, resulting in five cars being crushed.