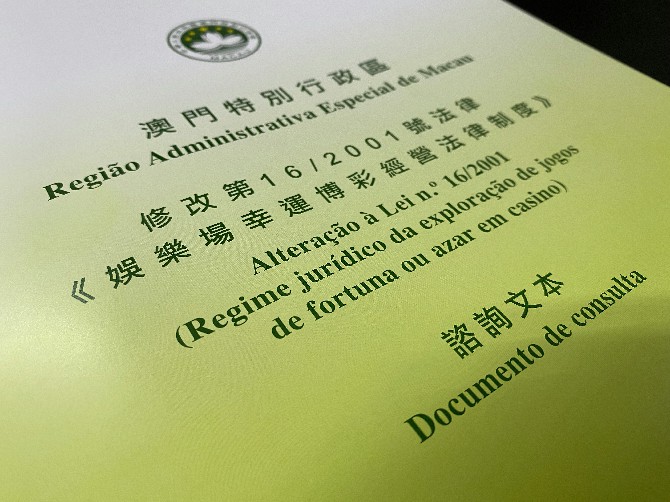 Nine main aspects in focus
Presenting the public consultation document in more detail, Ian I Lin, an advisor from the Office of the Secretary explained that there are nine main aspects about which the government wishes to hear the opinion of both the public and the gaming sector.
The nine areas are: the number of gaming concessionaires, the duration of concessions, additional regulations regarding inspections, the increase of workers securities, the reinforcement of verification mechanisms for concessionaires as well as gaming promoters and partners, the introduction of new delegates from the government, promotion of non-gaming projects, Corporate Social Responsibility (CSR), and a new sanctioning regime of both criminal and administrative responsibilities to the concessionaires.
Despite many questions on the first topic about the number of gaming concessionaires, Lei avoided giving a direct answer, saying only that before deciding on what would be a reasonable number of gaming concessionaires, the government wishes to consult public opinion.
“[As the public consultation document states] to increase the number of concessions can bring an unhealthy competitiveness. This can mean that the government might maintain or even reduce the number of concessionaires,” Lei said.
“We are open to suggestions. We are going to listen [to what the public has to say]. But we will maintain the main principle [which is that] the size of [the gaming industry] cannot be significantly reduced so that we can ensure the basic needs for the lives of our residents and the investments [in infrastructure and others] that come from the gaming tax collection.”
The only certainty is that the new gaming law will not allow the establishment of gaming sub-concessions, so all concessions granted will be have the same rights and responsibilities as the government.
Similar replies were given by Lei with regard to the length of the new concessions. He indicated that the government was opening the door to changing the current duration of 20 years, but did not explicitly say if the intention is to reduce or increase this period.
Lei said, “We know that most of the infrastructure and operations are already established so we believe that we should consider the duration of the gaming licenses.” He went on to hint that the new licenses might be shorter in duration than in the previous tender.
What is clearer is the government’s intention to increase the share capital of the gaming concessionaires as well as to ensure an increase of the percentage of this capital owned by shareholders who are permanent residents of Macau.
Additional regulations are also expected for the transfer and distribution of profits to shareholders that will require authorization from the government.
Besides enforcing measures to ensure local employment, the concessionaires will also be under tighter scrutiny from the government which will have added powers to verify the background of both the staff hired by the concessionaires or entities who work with them, or those who seek to establish partnerships with the concessionaires. This purview also extends to the gaming promoters and their collaborators.
Besides the inspection of the casino operations, which is currently done by the Gaming Inspection and Coordination Bureau (DICJ), the government wants to implement government delegates to “increase direct inspection from the government over the concessionaires.”
How this new inspection figure would work, and whose responsibility it would be, were also questions Lei avoided answering. He only said that these delegates will be assigned per concessionaire and not per casino.
Questioned by the media as to whether they would be part of the concessionaires’ administration, Lei refused to answer.
It was already known that the government intended to enforce CSR by the concessionaires beyond the percentage that is currently derived from gaming taxes. The government wants the concessionaires to become motors of diversification, supporting several sectors from Small and Medium Enterprises to ensuring labor rights, pay support to philanthropic activities, and the mandatory hiring of people with disabilities, among other considerations.
Lastly, the government wants to propose two types of criminal responsibility that would apply to gaming operators, namely illegal money deposits as well a crime of disobedience for obstructing the work of the DICJ inspectors.
During the 45 days of public consultation to October 29, the secretariat will host five opinion collection sessions, one of them solely dedicated to hearings from the gaming sector.

Public consultation report before May 2022

Questioned on when could the public expect a final report on the public consultation, the Secretary explained that the report will be done as soon as possible after the consultation is concluded.
Without giving even a tentative date for the publication of the report, Lei explained that it will be a close model for the draft law that will then be discussed, which makes it a very important document.
He also noted that according to the rules, there is a maximum timeframe of 180 days for this report to be presented, which means that the report will be ready on or before May next year.

Online gaming out of the question

Secretary Lei Wai Nong was pragmatic when he was questioned on the possibility of the new gaming law to include provisions allowing virtual gaming operations (online gaming).
He stated, “We do not wish to have any online gaming activities. This would be contrary to our plan and purpose.” He additionally noted, “We need the people here [physically] because that is what will support [not just the gaming industry] the other businesses such as the hotel industry, retail and all the other industries. Only by having people coming in [to gamble], we will be able to secure the employment of the residents in this and all the other industries.” Lei also remarked that the introduction of an online component to the gaming industry would cause “a lot of social problems.”
“We think we need to have a prudent attitude regarding this matter,” he concluded.