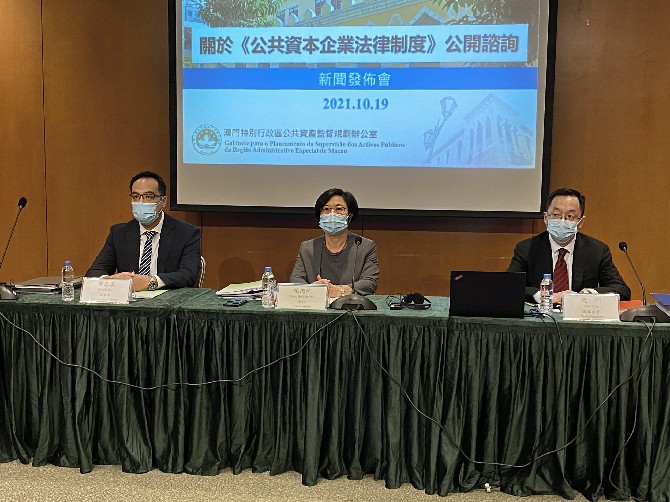 Twenty-two publicly owned companies of the Macau Special Administrative Region (SAR) will be, in the future, supervised by a dedicated public entity.
The information was disclosed by Sonia Chan, director of the Office for the Planning of Supervision of Public Assets (GPSAP), yesterday during a press conference by the Office presenting the public consultation document on the new legal framework for the publicly owned companies.
Chan explained that in order to improve on the supervision of public assets, namely the capital invested by the SAR in these companies, there is a need to establish a dedicated public agency since, for the time being, there is a lack of clarity in which departments or departments have oversight over these companies.
When asked whether GPSAP would take on such a responsibility, Chan said, “Might be us or another office to be created in the future. This is a decision that will be taken further ahead in the process, but I believe that it will be either GPSAP to take such responsibilities or a brand-new entity [yet to be created] that would replace us [GPSAP]. I don’t think will be an additional entity.”
The GPSAP director believes that there will be no overlap of duties between the new supervisory entity and the duties currently performed by either the Commission of Audit or the Commission Against Corruption, which Chan said, “have very specific duties related to occasional cases” and they do not supervise over the use and the effectiveness of the use of public money.
“The government injects public funds in these companies, so it needs a mechanism to verify that such money is not only used properly but that it has effectiveness in both the economic level and social purpose. There must be a social outcome [from the government participation]. This is the main goal and not the potential profit generated [by those companies], which is secondary,” Chan remarked, explaining the concept that drives the establishment of the new legal regime.
According to the GPSAP, the 22 existing public-owned companies were accountable for as much as 53 billion patacas in public assets.

Mainland model is the best model
According to information provided by Chan, during the surveys and analysis done before formulating the public consultation document of the new legal regime for the publicly owned companies, the GPSAP assessed several models and regulations from different countries and regions, including mainland China, Portugal, France, USA, UK, Germany, Singapore, and Japan.
In conclusion, the GPSAP decided that Macau regulations should follow the Mainland model as it is “ the model that better adjusts to the local reality,” Chan said.
She further explained that this model relies on a public entity to supervise the public assets entirely without any intervention of an independent third party. This is in contrast to the German model where the supervision is done fully by a third party and the Portuguese model which is a mixed model that includes public and private entities.