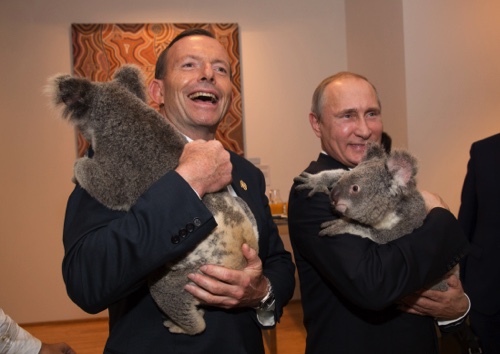 President Vladimir Putin left the Group of 20 summit in Australia early so he can sleep on the long flight home, as fellow leaders berated Russia over the conflict in Ukraine and warned of possible further sanctions.
Putin, who was told by European leaders to stop arming rebels, said before jetting off from Brisbane he needed 4 to 5 hours of sleep so he could get to work early this morning.
“We have to fly from here to Vladivostok 9 hours and then from Vladivostok to Moscow, another 9 hours,” Putin told reporters in Brisbane. “There are no other considerations.”
The crisis in Ukraine has overshadowed the G-20 summit, and European foreign ministers meeting today in Brussels will discuss expanding the list of individuals targeted by sanctions, according to German Chancellor Angela Merkel, who spoke with Putin for almost four hours during a late night meeting. Russia, which occupied and annexed Crimea from Ukraine in March, has repeatedly denied that it’s sending its armed forces into Ukraine or aiding the separatists.
U.S. President Barack Obama, who met with European leaders on the sidelines of the summit to discuss the crisis, said Russia had the “opportunity to take a different path” on Ukraine or face continued isolation.
“This is going to be a test of the stamina and a test of the political will of the United States and the countries of the European Union,” U.K. Prime Minister David Cameron told reporters. “Russia needs to know that there’s a real unity of purpose between America and the European Union in making sure that we don’t have a permanent frozen conflict on the continent of Europe.”
Putin told reporters he thought he and his fellow leaders now better understood each other on Ukraine after one-on-one talks on the issue.
The crisis is the worst standoff between Russia and its former Cold War foes since the Iron Curtain fell 25 years ago.
Putin received a blunt message when he approached Canadian Prime Minister Stephen Harper for a handshake during the Brisbane summit on Saturday.
“I guess I’ll shake your hand but I have only one thing to say to you: You need to get out of Ukraine,” Harper told Putin, the prime minister’s spokesman Jason MacDonald said in an e-mail. Putin told Harper that would be impossible because Russian troops aren’t there, the president’s spokesman, Dmitry Peskov, said.
G-20 host Prime Minister Tony Abbott  said he was happy to treat his guest with “respect and courtesy” and posed with Putin for photographs as they each cuddled a koala.
Nevertheless, when Abbott addressed leaders at the summit’s opening Saturday, Putin was seated at the other end of the room – a far cry from his central position at the Asia-Pacific Economic Cooperation summit in Beijing last week, where the Russian leader and Obama flanked Chinese leader Xi Jinping. Ilya Arkhipov and Thomas Penny  , Bloomberg