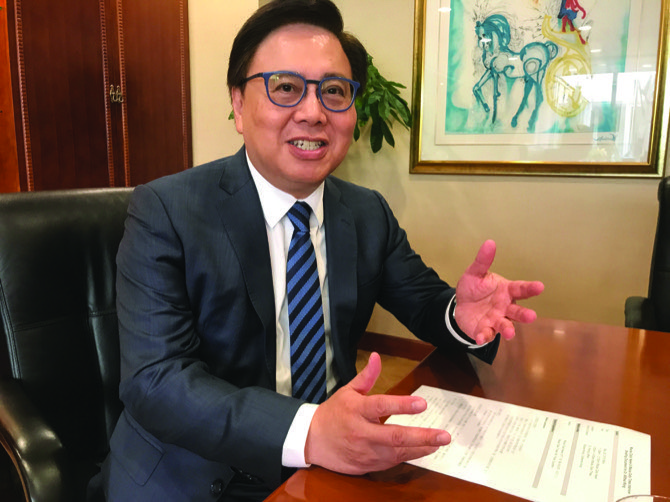 Be it the one-billion dollar transformation of Sands Cotai Central into The Londoner or the revamp of Four Seasons – due to open in 2020 and 2019 respectively – for Wilfred Wong much of the effort his company makes is to cater to a new and popular type of visitor: the three-generation family traveler.

“The grandparents, the children and the parents” are coming in ever greater numbers to Macau and filling hotel rooms across Cotai.

“Macau, as an attraction to different age groups, is gaining traction,” Wong said.

Also vital in Sands China Limited’s new investment strategy is the growth of the Premium Mass customer that seeks better quality and variety of non-gaming offers, while keeping the doors wide open for the mass segment where the company leads the pack.

“In the premium mass and mass we really outpace the market. If we look at the first quarter, the premium mass gaming revenue increased by 35 percent. Occupied room nights [increased] by 24 percent and retail sales by 33 percent, so the overall property visitations were up 18 percent year on year.”

In an exclusive interview with the Times, the ever-confident Sands China president explained why location-themed resorts appeal so much to mainlanders, who know The Venetian and The Parisian but most have never been to Europe. “We speak their language, we serve their food. It’s easier for them,” and Macau doesn’t present the hurdles that a visit to Venice or Paris does for those in China.

That was the strengths and opportunities side of our SWOT-interview with Wilfred Wong, which started with potential threats: U.S.-China “trade war,” Hainan and the Wynn scandal.

Macau Daily Times (MDT) – Do you think the Wynn scandal has affected the Macau image somehow, or the gaming sector by association?

Wilfred Wong (WW) – No. Everything happens in the U.S., and you know the company – particularly Mr Steve’s involvement in the company – was under scrutiny by gaming boards in the U.S. It is not something which I believe has any direct impact on Macau; because he has an indirect share in the Macau concession, which he sold. And therefore, the company is left to run on its own, without Steve’s involvement. Now, I cannot speak on behalf of them, but thinking as an individual investor, and he is not the controlling shareholder [anymore], the company is still very solid and very strong, and [the case] has had no impact on their performance so far. Macau has been performing quite well for them.

MDT – Regarding the development of Hainan into an entertainment hub with a gambling component, is it a threat to Macau?

WW – I do not think so. First of all, whether Hainan would be given the permission to run gaming is a big question mark. I do not believe it will come. […] Because if you look at what was publicly announced, they would be allowed to experiment with sports gaming and lottery. Now these are of a very different nature to casino gaming. Hainan is still within China, and China being a socialist country has many limits within which they have to operate. Macau has already been given this special permission [to have casinos] because of tradition and [the pledge of] maintaining the status quo. The central people’s government has the wisdom to allow Macau to continue as it is. But to open another ‘frontier’ in Hainan? I do not see it in the immediate or foreseeable future. I mean, they may experiment with lotteries, they may even experiment with horse racing, which already runs in some other cities in China – they are allowing that to happen – but to allow casino gaming which is 24/7 is another matter, particularly in a remote or economically relatively under-developed place like Hainan. They have to be very careful in making that decision, so I do not believe it’s an immediate threat.

MDT – Another potential threat is the so-called trade war between China and U.S. Do you think this environment can affect American businesses in Macau; Macau, China?

WW – I do not think Macau is so significant that it was a feature in this whole U.S.-China relations, because we are talking about major, major trade issues between the two countries, and Macau is probably the last area they want to look at. I think the national people’s government right now are really focusing on how to resolve those major trade issues, reducing the deficit balance with the U.S., and looking at areas like high-tech and intellectual property rights; so these are the predominant topics they are really focusing on, and not really Macau.

MDT – What I meant to imply is as we are approaching the tender for the new licenses, that the trade negotiations may be a threat to the American concessionaires’ status quo in Macau.

WW – I think the central government really is very pragmatic. On the one hand, they are looking at their trade issues, economic relations, [and] long-term U.S.-China relations. On the other hand, they would have to have total regard for Macau’s own development and [be cognizant that] by taking certain actions it will disturb the balance, the stability and harmony [of the MSAR]. Even if you were to do something to Macau, the impact it will have on the whole U.S.-China relations is minimal.

MDT – Do you feel you are getting clear indications from the government concerning this new concession process?

WW – Well, I keep telling people that we take into consideration what the government says. The government says “we want diversification, [balancing] economic growth; we want non-gaming.” Well, we at Sands China are doing everything according to the government’s lead. So SCL, if you look at the whole picture, is the first among peers to do that [non-gaming activities]. If you look at the six concessionaires together, we are 51 percent of the total hotel rooms, we are 53 percent of the retail malls, we are 87 percent of the MICE space, and we’ve already achieved 16 percent of non-gaming revenue over total revenue, while in the Mid-Term Gaming Review commissioned by the government [May 2016], it was only recorded at about 9 percent. So, we are doing everything we can to push to the limit and our recently announced investment in The Londoner with the revamp of the Sands Cotai Central is also an indication of our commitment to the long-term future, of our confidence and a lot of those investments are in non-gaming.

MDT – Speaking of which, are there any new developments in The Londoner project?

WW – At this stage, all I can say is it is a total renovation [of SCC]; exterior, interior. Interior includes hotels, [the] addition of apartments, a shopping mall, common spaces, and there are many more features, like F&B – we will definitely have British Pubs, fish ‘n’ chips…

MDT – Will there be open-
air areas?

WW – There will be a lot of sky-
lights. But we believe that the Macau weather needs air-conditioning. So, even if we create something like an open space, it would be covered.

We are converting the Holiday Inn Hotel into The Londoner Hotel. Basically, the rooms will be similar to the size of the Venetian. We will also increase the accommodation offer with 350 new apartment units in the St Regis because we still have a lot of space there now. And those apartments will mainly be one to two bedrooms suites; about two-thirds one-bedroom and one-third two- bedroom suites. It will be a new type of accommodation with kitchenette to cater to this new clientele [the three-generation family travellers]. This is becoming popular. So, at The Londoner, having these new tourists in mind, the shopping mall will emulate the main London streets. There will be this London ‘streetmosphere.’

MDT – You said recently that many tourists who come to Macau have never been to Europe. But I want to look at it the other way around: are mainland tourists going to the real places after visiting the Venetian, the Parisian?

WW – (Laughs) I think Chinese going overseas is becoming a trend. A lot of Chinese really want to visit overseas. But as you know, they need to apply for passports, and visas and, it is a lengthy and complex process, […] they look at your income level and all that. [Coming] into Macau they never look at income level, so that is why it’s easier to come here. And of course, these would not be the only attractions of Macau. Actually many of them told us they like us [Macau] because, first, we all speak Chinese; it’s easier for them. Second, the food is still Chinese food, even in ‘Venice’ [laughs]. And third is that Macau has its own attractions as well.