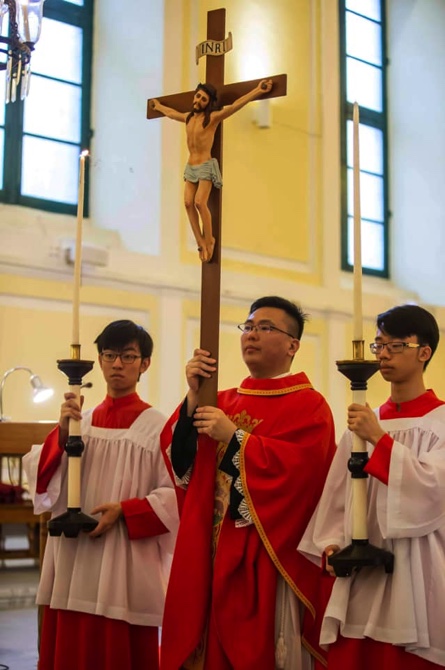 The movement of missionaries has always been a constant feature of Christianity. However, the Macau SAR currently faces a lack of clergymen, thus leading to a shortage of resources.

According to Fr. Cyril Law, Visiting Academic at the Faculty of Religious Studies, the University of Saint Joseph, the global missionary movement is suffering from stagnation.

Currently, the Diocese has a total of seven seminarians, which the chancellor hoped could meet demand in the near future.

When asked for a comment regarding whether the church should intervene with the ongoing social unrest in Hong Kong, the priest remarked, “The Church can only defend actions which are objectively good and at the same time born out of a correctly informed conscience.”

Earlier this week, the priest held a talk based on a document written by Pope Benedict XV titled Maximum Illud.

The talk was a part of the University of Saint Joseph’s public lecture that speaks on the missionary activity of the church to be carried out in the future by missionaries from the very countries and cultures being evangelized.

Macau Daily Times (MDT) – Speaking about missionaries, putting it into today’s context, is the Diocese actively raising missionaries, sending out local missionaries or inviting some from abroad to serve in Macau?

Dr. Cyril Law (CL) – Pope Francis recently said […] that by the fact that we are baptized, we are a mission. In October, it was an extraordinary month of mission just because the Diocese had a huge mass on the façade of the Ruins of St. Paul last month. The context and the contemporary situation is that we are seeing the missionary activities in the world suffering from a kind of stagnation. We do not have enough local clergy, the time needed to train missionaries, learn a particular language and adapt to the culture – it’s a strain on resources. Also, through globalization, in the past […] Europeans were going to Asia, Africa and new America. But now it’s also in multi-diverse directions. Indians are going to Europe, even Koreans are being missionaries across the world. Once upon a time, these were considered developing countries and are now sending out devoted missionaries – to what we call Christian West.  This is called the New Evangelization.

In this movement of people, they may have been some unease in the past, […] perhaps it was not foreseen in the past that what had once been the missionary-exporting countries, such as the predominantly Caucasian European countries, are now benefitting from the arrival of multi-racial missionaries from other parts of the world. I think we have already come to appreciate this reality by now.  The challenge is brought forth by those navigating mixed sources of missionaries. It is creating a new challenge that forces us to go back to the basics and not really so much on the externals. This is the new phase of mission today.

MDT- You have mentioned that Macau faces a lack of clergy members in the Diocese. When and how can we fill this gap in the coming few years?

CL- I think when we are talking about Macau, it’s multi-ethnic. […] When we say locals, we just don’t mean Cantonese speaking. Currently we have seven diocesan seminarians, and they do not come from just Macau. With these seven, hopefully, if they persevere and if we have a steady intake every year then probably – talking about in 10- or 15-years’ time – we may be able to have a steady supply of locally trained priests. However, it is not meeting the rate of retirement, and it is not catching up the rate of priests who are going to retire in the very immediate future. We are still actively relying on the support of missionaries.

MDT – With that being said, what other challenges is the Diocese facing at the moment?

CL – I think secularization – that is the tendency of relativizing religion as a private interest. That is the main challenge because of our moral values – which reflect our belief in a good, just and merciful God – are not taken seriously or not seen as objectively true, so we have a problem. The Catholic church will just be reduced to a lobby group.

We have to be careful about how we articulate or present it, otherwise we can be easily accused of being draconian, or not open to communication and change. The church has to develop within its own set of truths that we inherited and that was revealed to us.

MDT – There may always be some kind of a clash between religion and politics. Does the Diocese of Macau have that kind of burden?

CL – If politics touches on human dignity and human rights then it’s not just a political issue anymore. It’s an issue that touches on the salvation of the person. If some political policies or tendencies are encroaching upon a person’s right to freedom, to choose freedom or salvation […] then it’s no longer a political issue, rather, it’s a personal issue. God has given us the duty to protect the weak, which means that the church is bound to speak on behalf of the morally persecuted.

MDT – In the case of ongoing social unrest in Hong Kong, do you believe that the Catholic church should integrate into it, hence the worsening scenarios that involve a recent death of an activist?

CL- In order to have a just response to something that seems to be unjust, we must have an adequate analysis of the gravity of the situation and the intentions of the people involved. It’s a grave situation when lives are hurt, when violence is being perpetuated from whatever side. When it’s a grave situation we must then consider the second criterion, which is the intentions of the actors. It would be morally plausible if the intention is to maintain peace and justice in charity and in truth. But when the external signals are severely mixed and contradictory, then it is very hard to make a fair assessment. The Church also has to say something to a third point, which is conscience. [….] If you are doing something out of pressure from your superior or peers against what your conscience dictates, then such actions defy truthfulness and honesty. The Church can only defend actions which are objectively good and at the same time born out of a correctly informed conscience. […] The Church must speak about the formation of conscience, that’s the Church’s God-given role.

MDT – How is the Diocese’s current relationship right now with the Vatican?

CL- We have a very transparent relationship with the Vatican. We were recently visited by Cardinal Fernando Filoni [which is a] sign of the Holy See’s care and the confirmation of our work here. Our Bishop Stephen Lee will be going to Thailand and Japan to meet and welcome Pope Francis’ visit in Thailand very soon, along with other Asian bishops. It’s an event that shows our solidarity with the Holy Father himself.

A shooting star in the Diocese

Fr. Cyril Jerome Law, Jr., entered the St. Joseph Diocesan Seminary of Macau in 2009, after receiving formation in Macau, Rome, and in England.

He was ordained into the priesthood at the Macau Cathedral in 2014 where former Bishop José Lai presided over the ordination.

Born and raised in Hong Kong, he entered the Savio House Aspirantate at 13, and went to the United States to study Theology when he was 17.

Following his studies in the U.S., he taught secondary school in Hong Kong.

The priest is also the founding Coordinator of the Tridentine Liturgy Community in Hong Kong.