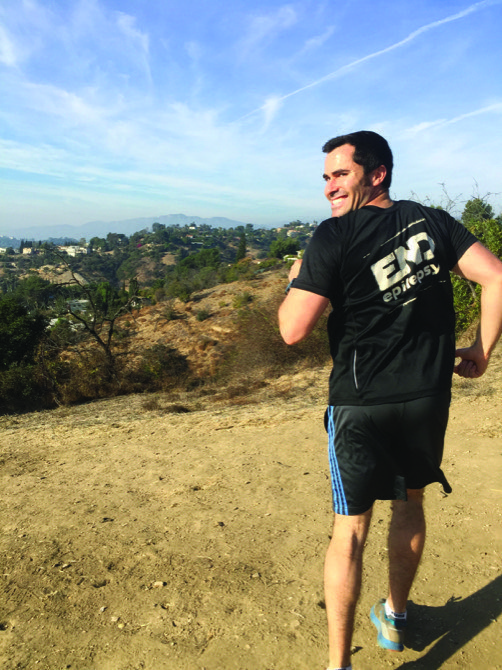 Loren Zitomersky has gotten used to the jokes: “Hey, you’re running the wrong way!” Slamming straight into trees he didn’t see behind him? Not so much. Also, ouch.

But the Disney movie production lawyer is on a singular quest to break the world record for the fastest marathon ever run backward. Zitomersky, 33, who’s known on social media as “Backwards Guy,” hopes to accomplish the feat at next month’s Boston Marathon to raise money and awareness for an epilepsy cure.

The Associated Press caught up with Zitomersky, who lives in Los Angeles, to find out what makes him tick. (Or is that tack?)

— Let’s start with the question everyone surely asks when they see you: Why?

Loren Zitomersky (LZ) – My dad lost a son to epilepsy in 1977 before I was born. I never got to meet Brian, but his loss obviously had a huge impact on my dad. He and I started riding bikes and running marathons to raise money for the Epilepsy Foundation . Nobody wants to talk about epilepsy — it’s such a stigmatized disorder — yet one in 26 people has it.

What are your plans at the Boston Marathon on April 16?

LZ – Last June, I qualified for Boston with a 3 hour, 14 second marathon. Immediately I told myself I’m going to go big with my epilepsy fundraising and awareness campaign. I was wracking my brain trying to figure out what to do for Boston. Someone threw out an idea: What about a world record? But most of the records were kind of cheesy — fastest marathon run while dressed as a clown; that sort of thing. Then I stumbled upon the record for fastest backward marathon.

— Who holds that world mark now?

LZ – Xu Zhenjun set the record at the Beijing Marathon in 2004 with a time of 3:43:39. Beating it will mean running backward at a pace of about 8 and a half minutes per mile. In training, I’ve worked myself up to 45 backward miles per week, but I can’t emphasize enough how hard it is. It’s not efficient at all. Your calves feel like they’re on fire. You use 33 percent more energy running backward than forward.

— What are the occupational hazards?

LZ – At first it was tough just getting my bearings and balance. Early on, I ran into a tree and cut up my back. When you’re running forward you can zone out. You can’t do that running backward. But I’ve gotten used to it. Sometimes I run with a friend who acts as a spotter. He’s basically the eyes in the back of my head: “Right, right … left, left … in 100 yards we’re going to make a left turn.”

— How do people react when they see you?

LZ – Hey, it’s LA — there’s a lot of weirdos out here. A lot of people just stare at me. Some get really excited and run backward with me for a few steps. I had a woman run up and hug me. Kids love me — most of them, anyway. A little girl saw me and she immediately turned around and started running backward. Then she fell down and started crying. I guess backward running isn’t for everyone. But I do get a lot of messages of support from people who suffer from epilepsy.

— How confident are you of breaking the record?

LZ – It’s literally going to be the hardest thing I’ve ever done in my life. I’m by no means 100 percent sure I’ll manage it, but I’m going to give it my all. I’ll be a wreck, crying my eyes out. I’m going to be a running meme. William J. Kole