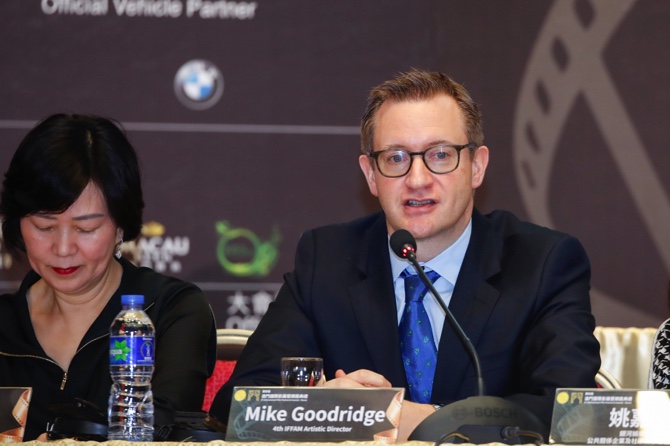 Stories about Macau, when told as films, should not only be made for the city, but should also be made appealing to the world, recommended Mike Goodridge, artistic director of the International Film Festival and Awards – Macao.

Goodridge explained the lineup of this year’s film festival at a commercial business briefing organized by the British Chamber of Commerce in Macao. As in previous years, there are different categories, such as Gala, New Chinese Cinema and World Panorama.

This year, the organizer has added the 20th Anniversary Macao Special Presentations to celebrate Macau, featuring five local productions. One of them is a compilation of nine short films produced in the last 20 years, collectively titled “Years of Macau.”

After the briefing, Goodridge spoke to the Times about this year’s film festival and gave his suggestions to local filmmakers.

Macau Daily Times (MDT) – What is the main criteria for choosing the films this year?

Mike Goodridge (MG) – The excellence of the film. There are thousands of films – 20,000 films – made every year around the world, so the idea is to pick things that are fresh and original which I think the audiences will respond to – specifically audiences of Macau. As I said, we’re gaining a combination of real crowd pleasers, and more art house or challenging films that we think people will respond to, [that] they will enjoy once they’re in the cinema. The hardest thing is to get them into cinemas.

MDT – What is your definition of ‘excellence’?

MG – [Excellence] is highly subjective, of course. But I do work with an amazing team of programmers and consultants. There’re five of us, and between us we’ve got over a hundred years in the film industry. We’ve been going to festivals and watching hundreds of films a year for, in my case, 30 years. We feel that we have a sort of good curatorial instinct to be able to narrow things down to 50 films. We’re also looking for […] brand new films that haven’t appeared anywhere in Asia to give Macau that kind of special, exclusive moment with these films before they’re released in cinemas.

MDT – You’ve mentioned several times that Macau doesn’t have a strong film industry. Do you think it’s difficult to choose the right films for the audience in Macau?

MG – The audience in Macau is very small. […] Look at China, that’s a country of billions of people. When a film works in China, like “The Captain” or “My People, My Country,” these blockbuster films, you’re making a film to appeal to vast audience. If you’re trying to make a film for 600,000 people in Macau, that makes no financial sense. Nobody would ever do that. Most films you make with a view to sell it around the world, so the idea is to get to a quality threshold in Macau where the Macau people will want to see the film, [and] also people in [North] America or Latin America, or Russia, or Europe will want to see the film too.

MDT – What suggestions do you have for ambitious local filmmakers?

MG – When they make the films, they have to think about how this film is going to work – not just in Macau, but everywhere. They have to think about telling a story that’s universal. Think of one of the great foreign films you like. I’m sure you’ve seen French or German films that you consider great, but that’s not your world, is it? But there are themes in there that resonate with you, because they’re about human beings. I think that’s what happens in Macau. The filmmakers have to be more ambitious and start to think of telling stories about Macau that will work everywhere.