Q&A | Olivier Verschelde Lausanne Hospitality Consulting: ‘Macau is close to being a producer of gastronomy’ 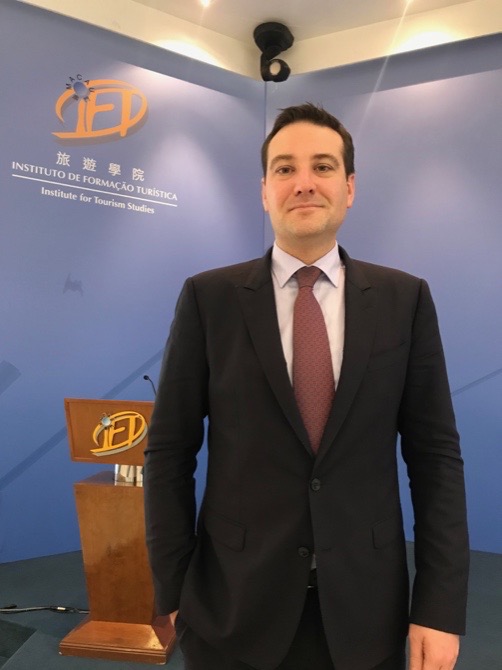 Olivier Verschelde visited Macau recently to present a two-day educational program on concepts and sustainability in the food and beverage sector.

Verschelde is a senior consultant at Lausanne Hospitality Consulting, a subsidiary of Ecole hôtelière de Lausanne. The education institution, which is located in Switzerland’s canton of Vaud, is widely regarded as the most prestigious hospitality management educator in the world.

This week’s program, developed in partnership with Macau’s Institute for Tourism Studies (IFT), dealt with concepts such as front and back of house efficiency, how waste and energy consumption can be tapered, as well as why longevity in the business is the best way to ensure sustainability.

“A confusion in your offer of concept and services is going to create a short lifespan,” Verschelde told the Times in an exclusive interview. “Because people stop being interested and investors start getting worried. But many mono-concept products have been around for 30 or 40 years and are still fully booked.”

The hospitality management consultant sat down with the Times to talk about the food and beverage sector in Macau and what he makes of the recent designation as a UNESCO Creative City of Gastronomy.

Macau Daily Times (MDT) – Is Macau a mature food market? How is the F&B sector maturing?

Olivier Verschelde (OV) – The offer in Macau is almost endless. There is a lot of F&B [food and beverage] offerings; from coffee shops to bars, from restaurants to fast food kiosks. But I believe it’s going to consolidate at some point. We will see people looking for a fixed identity. Because a lot of restaurants now are doing a little bit of this, and then also saying… let’s have a Chinese menu. The problem is that the other restaurants in the same hotel are doing exactly the same. They’re doing a little bit of Italian and then there’s [also a bit of] Chinese.

At some point decisions will be made to say, rather than having all of this mix and match, we are going to create one good working Chinese restaurant and one good working Italian restaurant, with clearly defined design aesthetics and identities. This is still not 100 percent the case today. Macau is also closing in on the time when it stops being a consumer [of gastronomy] and starts being a producer. Today, Macau is consuming every possible concept and brand that it can get its hands on. At some point this is going to turn around, and these [local] brands will be exported around the world, just as they were in Hong Kong.

MDT – How significant is the recent designation of Macau as a UNESCO Creative City of Gastronomy? Can it really influence consumers, as well as educators and those working in the culinary world?

OV – It’s definitely a good starting point that gives credibility [to Macau]. We can use it […] but if we overuse it then that credibility might be a bit lost. But if it is used wisely, [the designation] can be helpful in the promotion of Macau and the flourishing of [this sector]. Macau is benefiting from the reputation [of being a UNESCO City of Gastronomy], which today is something that is happening in a very closed environment. When you look at the rest of the world, there is very little influence coming out [from Macau].

If you look at when Peru and Chile were called ‘gastronomic hotspots’, now we see Peruvian cuisine being blended with Japanese cuisine and showing up at more and more upscale places as being the latest trend. People now go and visit – not only to see the country – but to go and live that [gastronomy] experience.

Macau can start to export its signature dishes and signature kitchen style in the same way… and begin to see it copied around the world. And being copied remains the biggest form of flattery.

MDT – Can gastronomy be used as a marketing tool to attract tourists, and if so, does the cuisine need to be tailored to the Chinese?

OV – I think that if we look at the touristic profile of Macau, it is still very regional-oriented. Macau is very strong in the Asian market, but not so much in the western market. The Chinese customer is changing and we always have this responsibility to educate. We know that the Chinese customer, in terms of eating habits, is quite strong [stubborn]. So where can we contribute in terms of education?

Apart from cooking and serving, there is more to it [hospitality]. It is about educating and bringing general culture [together]. The customer also feels satisfied when they have learnt or discovered something new. The ‘wow’ effect is not only in food quality and service quality, it is also about the capacity to tell a story and [inform] people about what is behind [the food]. I think exporting [gastronomy] from Macau will help with that external marketing.

MDT – Can Macanese cuisine, as a halfway house between East and West, be used as a bridge to entice Chinese customers to try European cuisines?

OV – Yes – absolutely. But then that will be a concept on its own. In terms of food fusion, there can be Macanese food, then there can be a 50-50 fusion between Portuguese and Chinese food, then [and] there can be Portuguese food with Asian influences. Or we can go more Asian with a Portuguese twist. All of these are [separate] identities, but the blend is very interesting. I would go as far as saying that there is still something to be done in regards to Mediterranean/Middle Eastern food with an Asian twist. [That] could be the next big thing.

MDT – The Institute for Tourism Studies was ranked second-best for hospitality in the Asia region last year. Coming from the most renowned hospitality school in the world, how do you regard the development of this institution?

OV – Of what I have experienced… staying in their hotel and eating in both restaurants, I can only say that I am very impressed. I am very impressed with the overall organization, which is always meticulous. The standard is working here. It’s very professional and they [the lecturers] are close to their students. They understand the game.

I have also experienced the mentality of the students. They are very open […] and are able to compete in any type of market [around the world], especially as they speak multiple languages. [The IFT] is creating some very impressive young professionals and I think the market will keep buying them. I believe for the time being, IFT’s output of graduates is still feeding the need in the local market. But I am sure that some students want to discover some other markets – and this is great because they will get best practices and [further] knowledge from abroad and bring that back to Macau.

MDT – There has been considerable alarm in recent years over the growing number of tourists traveling from East Asia to European destinations. Some are calling this ‘tourism saturation’. Do you consider this a problem and is Macau reaching that stage?

OV – This will be different for each region and will need to be evaluated [individually].  I don’t think that Macau is saturated yet and I don’t think it will be for some time. But if we look at Paris – the world’s most visited city – it is reaching the point where I think they may start putting [visitor] quotas in.

Maybe access to certain cities will become even more exclusive in the future.

At some point, it’s just going to be unpleasant for the population [if there are too many tourists] – but also for the tourists. I know that if I were a tourist, then this [phenomenon] would affect my experience of the city.

MDT – The development of the Cotai Strip is supposed to alleviate congestion in Macau’s central district. Was this a wise move?

OV – Yes, there is space in Cotai. But the problem is that you don’t go to Paris to visit the outskirts of Paris. If you visit Paris, are you going to be happy to hear that [they] have developed a whole new Paris [in the suburbs]? ‘You can visit that – but the Eiffel Tower is unfortunately going to be for next time.’ That’s going to be impossible.