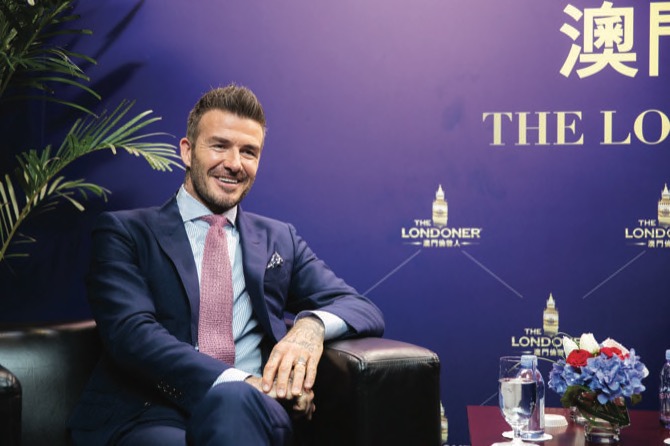 David Beckham returned to Macau this week for the announcement of The Londoner Macao integrated resort – the latest property to be unveiled by Sands China on the Cotai strip and, with a phased opening plan extending into 2021, likely one of the last before the city’s gaming concessions are reviewed.

Ahead of this critical juncture in Macau gaming, Sands China shows little signs of slowing its Cotai expansion. It’s doubled down on the strip and is once again making conferences and exhibitions forefront among its non-gaming offerings at the USD2.2-billion renovated property. Senior officials say they are confident a new license is heading their way in 2022. They say diversification is key and they are showing they’re willing to walk the walk.

Macau Daily Times (MDT) – London. It’s the third instalment in Sands China’s location-themed approach to the integrated resort model. Many might suppose it’s less iconic than Venice or Paris, lacking the instantly-recognizable features of Venice’s grand canals or the Beaux-Arts architecture of Paris. Why choose London? And has this made the Londoner Macao concept tougher to put together than its sister ‘cities’ in Cotai?

Wilfred Wong (WW) – London is both easy and difficult to define. It’s the old meets the new; very contemporary in some parts but very traditional in others. London is so cosmopolitan and means so many different things to different people.

Robert Goldstein (RG) – I think London is easier than Venice or Paris. London is probably the easiest for me, because there is just so much to it. Venice has the canals and the gondolas and the bridges, and certain iconic, architectural elements. But London is a fascinating city. You can have fun with the black cabs, with the double decker buses, the British humor, the iconic nature of Churchill, Shakespeare or the Beatles – it’s endless, and we plan to integrate these elements into the property.

MDT – How does London as a destination resonate with the Chinese market?

RG – I think Europe as a whole resonates with a lot of markets, not just China.

For example, we did the Venetian resort in the U.S. about 20 years ago. I would hazard a guess that maybe just 1 or 2 percent of Americans have been to Venice and that’s because it’s not easy to get to; it’s far to travel and expensive. Well, the same is true here. I think a lot of people in Macau and China have never been to London and so a part of the fun is that we create a glamorous version of these cities as hotels. London is a fascinating city [… and] so I think it is very suitable. Not just for here, but also for the U.S. I wouldn’t be surprised if someday we see a London-themed hotel in Las Vegas. It just works on so many levels.

MDT – When you look at the figures in Macau, few can dispute that Sands China has led the charge in terms of non-gaming diversification. At the last count, around half of Macau concessionaire hotel rooms and retail space was in Sands China properties, while the vast majority of MICE space is also inside your resorts. From what is promised about The Londoner Macao, is it fair to say that you are doubling down on these alternative offerings?

RG – Diversification has been our mantra from day one. People talk about it, but we actually do it. We invested USD15 billion into the non-gaming aspects; hotel rooms, MICE rooms, retail, spas. I mean, look at what we’ve done here. We were the only ones who wanted to move out to Cotai. Everyone else just wanted a small plot on the Peninsula.

We keep investing because we like Macau. We are very grateful to be here. We like being here and we take the government’s advice very seriously. They say they want non-gaming and so we provide non-gaming. Gambling is important – lets not deny that – but diversification is very important too.

MDT – Gaming revenues in the last few years have shown signs of market stabilization, but the divide between VIP and mass is drifting further and further in favor of mass. Given that Cotai is generally more geared toward mass than the Peninsula, is the changing tide vindication for Adelson’s bet on the strip?

RG –  Absolutely. When I first started coming here it was all about super high-end and VIP rollers. Today it’s a mass market and a lifestyle market, and that includes entertainment and restaurants. Now everyone wants to be in Cotai because that is where you can built a 50-acre resort, not just a gambling casino. Anyone can build a casino, but integrated resorts are much tougher to do. […]

I just think that our actions speak louder than words. Words are cheap, but put up $2.2 billion and that shows how we have confidence in this government. We are big fans of Macau and big fans of the governments’ [vision], and we are committed to making Macau a leisure destination.

MDT – International sports and business personality David Beckham has been making periodical trips to Macau since 2013 to feature in adverts or star in viral internet shorts. We have felt your presence here for years, but do you feel a reciprocal connection to this city?

David Beckham (DB)  – I am in Macau a lot, as well as Asia, and I think I would be here even without this partnership. There is something about this place that I really enjoy, in both Macau and China. It’s being around the people, eating in the restaurants, the entertainment…

For me, the great thing about shooting the campaigns [promotional videos] is that I get to meet real characters from Macau and China. It’s about the fun that comes with being with great people, for example in the last campaign we shot about the egg tarts. 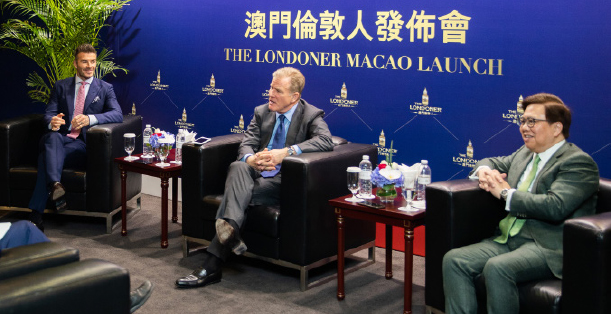 RG – When you watch that egg tart clip, you can see [David Beckham] is really getting a kick out of it. That’s really clear. It looks like he and the other actors are having a good time and I think that translates into the video because it has been viewed millions of times.

DB – I’ve been an egg tart fan for years and I used to go to Portugal just to get some. Now I know where to get them here!

MDT – David Beckham is making one of his first forays into interior design with The Londoner Macao. Beneath the excitement of taking on this type of project, is there a certain responsibility that comes in being asked to capture the essence of your hometown?

DB – It’s exciting to be involved in The Londoner, because it feels a bit like home to me. […] When we talked about The Londoner coming to Macau, we talked about how to make it authentic, how to create London in Macau. So, we have Big Ben, the Houses of Parliament and the Royal family. Those things are easy. But making the property look authentic is a different question. It’s not just that it’s called The Londoner and you see a red bus drive past. It’s so much more than that, and those details are found in the experience of being here.

MDT – The property was earlier described as an “immersive” experience. Are these details designed to make visitors forget they are even in Macau?

RG – It’s not London – the property is not meant to be. It’s meant to be just a taste of the city. A part of this project is escapism. Part of it is about being in a fun place. I hope that we can do that well. There are other elements we want to bring to the property. It should be whimsical. [For example] I think the Brits have great humor and a great sensibility about life. I hope we can bring that to The Londoner too.

MDT – Speaking of Brits and their humor, just a few weeks ago, compatriot, close friend and late night show host James Corden pranked David Beckham in a video clip that has gone viral. In the clip, Corden tricks you into believing a deliberately horrendous statue of you is to be placed outside the Dignity Sports Park in California. Does having a friend like Corden keep you on your toes? And are you on the lookout now when attending openings or announcements like these?

DB – [Laughs] Having a friend like James is always entertaining. He’s always an entertainer. I’ve known him for a long time, but he surprised me with this one. I think I was in shock. It was early morning and so I have that on my side. I also had my best friend with me and I didn’t think that he would be in on it… but he was. […] It was an amazing honor to have a statue of me in Los Angeles. I always expect to have a humorous side to it with James… but he definitely took it to the next level.

But trust me – I’m planning on getting him back and I will get him back at some point.