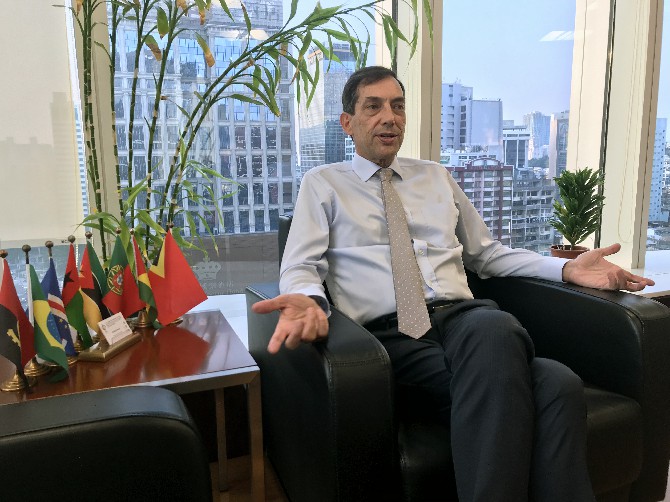 Rodrigo Brum, Deputy Secretary-General of the Permanent Secretariat of Forum Macao appointed by the Portuguese-speaking countries, completed his extended term at the organization this week.
In his final days at Forum Macao, Macau Daily Times spoke to Brum to learn about the challenges and developments at the organization over the past three years and his perspective on its future.
Brum is a believer in Forum Macao’s development in the context of the Greater Bay Area, but he recognizes that there are challenges ahead “in coordinating member states.”
Brum was born in Mozambique, but moved to London in 1974, where he studied Civil Engineering at the University College London until 1978. He then graduated with a degree in Business Administration from University of Lisbon’s Faculty of Economics in 1983 while working for the Research and Studies Department of the Foreign Investment Institute (FII).
After graduating with an MBA from the New University of Lisbon, in 1987 he became a project manager for FII’s U.S. Desk, one of the first efforts by the Portuguese government aimed at attracting foreign direct investment from a selected market.
Brum remained in Lisbon until 1990, where he developed his career in management. He then moved to Macau to work as Chief of Office for the Secretary for Economy and Finance for the last government under Portuguese administration, and later served as President of Sociedade do Parque Industrial da Concordia, as well as in other non-executive board member positions.
Brum was also involved in private equity and venture capital roles while lecturing at the Faculty of Economics of Lisbon’s Technical University, and other consulting assignments. He finally returned to Macau in 2017 for a three-year term as Deputy Secretary-General of the Permanent Secretariat of Forum Macao, after being appointed by the Portuguese-speaking countries.

Macau Daily Times (MDT) – What is your evaluation of the work done by Forum Macao over the last few years? What has been the most significant achievement?
Rodrigo Brum (RB) – I believe that the regular visits organized by Forum Macao to the different Portuguese-speaking countries are, in fact, the main point that allows for better understanding and knowledge from Macau, the Portuguese-speaking countries, and the general public of Forum Macao’s main duty and purpose – because we do realize that most of our work is not well known by the public.
The promotion of opportunities in China and Portuguese-speaking countries is the main goal of the Forum Macao, as it increases commerce and trade relations between these two big groups.
What Forum Macao does is these so-called “missions,” which in the first years had a great emphasis on the mainland due to the interest of Chinese entities, but also a lot of interest from the Portuguese-speaking countries. These visits allowed delegates from the different Portuguese-speaking countries to present the conditions and investment opportunities in each of the countries, disclosing information that even government agencies from those countries cannot do most of the time because, as we know, China is a huge country and is not easy to reach high-level decision-makers at the municipal, regional and provincial levels.
It is this capacity to do these missions at the higher levels and with high performance that Forum Macao has been developing, especially in the first 15 years since its creation.
In March 2018, it was proposed by the former Secretary-General, Xu Yingzhen, that besides missions to the mainland, the Forum would also do yearly missions to every one of the Portuguese-speaking countries.
From a structural point of view, this was a very big difference and a very important one. [The missions] started immediately that year and continued in 2019.
This was particularly important. For instance, I remember that in 2018, the Forum conducted a mission to East Timor. That was the first time we had visited the country in over five years. So we can see how important this measure was in establishing annual visits to all of the countries. Unfortunately, 2020 was a very unusual year and we were unable to travel.

MDT – We have been hearing a lot, especially from the new government of Macau, about Hengqin and the opportunities that it will generate. Will these opportunities also extend to the Forum Macao countries?
RB – Hengqin is already creating – and will create even more in the future – not just local opportunities, but it will be a huge access link to the mainland and the Greater Bay Area (GBA) in particular.
The vision of what has been planned for Hengqin far surpasses what we could ever have imagined in the past.
If we pay attention to the developments that have been occurring, we can see that although Macau had six times the gaming revenue of Las Vegas, we also had six times fewer hotel rooms than Las Vegas. The hotel capacity that Macau needs is being built on the other side of the border [in Hengqin]. It is in Hengqin that we have theme parks and the Marine Museum, among others.
But more importantly, we need to look at future border developments. Not just this border post that was recently inaugurated, which is already a single-post and is located on the Hengqin side, but plans that include direct links to trains to Zhuhai Airport and also the integration of the mainland railway system with Macau’s Light Rapid Transit system.
According to estimations from central government authorities, the number of people that are expected to use this system and the train links in the future is immense. This is roughly three times the number of tourists that were expected to visit Macau and that everyone was afraid was too much.
This has to do with the fact that the planning is based on the idea of a very dynamic and almost seamless cross border system that allows people to interact and use both sides of the border in an interconnected way.
Even for the Traditional Chinese Medicine Science and Technology Industrial Park, which Macau has been investing a lot in, people have no idea how big, how technologically evolved and scientific it is.
Forum Macao has been working on creating this network, which also includes a lot of people that work in this field in Mozambique, Guinea-Bissau and other countries. What is difficult is coordinating all this, because [the Forum represents] several countries with different ideas, different ways of doing things and different cultures. In some ways, I can say that we lack a bit of organization in how to do things in an alliance.
I do believe that after Covid-19, this connection with Hengqin will become a bigger gate to and from Macau.

MDT – You are finishing your term as Deputy Secretary-General of the Permanent Secretariat of Forum Macao appointed by the Portuguese-speaking countries, and your successor has already been officially announced. What message do you have for him?
RB – I wish my successor a lot of success and I hope that he can do the things that I could not do, namely the coordination of work between the different delegates or to coordinate better between the different countries.
From now, he will have the duty of responding to the demands and goals of Forum Macao, namely the ones that were highlighted during the last Ministerial Conference. I think that he has both diplomatic experience and the knowledge of Macau and China, due to his previous experience in the relations of São Tomé and Príncipe with China.
I think the bigger challenge will be the coordination of the different countries, and preparing future proposals and action plans that will be taken to the next Ministerial Conference.

MDT – How does the Portuguese Speaking Countries Products and Services Exhibition-Macao (PLPEX) relate to the new exhibition area of the new building of Forum Macao?
RB – The two things are complementary, or it might be better to say that they do not overlap each other. This issue is perhaps a little different and has to do with the fact that the Macao International Trade and Investment Fair (MIF), as well as the PLPEX have had some positive developments, but they have never really become a place for business where contracts are signed, like what happens in Hong Kong for example.
This has to do with the fact that Macau is not a logistics base for the passage of products, so there is some confusion when we talk about bringing products from Portuguese-speaking countries or any other place in the world. They are not able to be brought into Macau and from here to the mainland.
What Macau can be is a link. It is a city that has a special advantage with the Portuguese-speaking countries. This is not exactly the Portuguese language or even the English language (which are both spoken here), but it is the fact that in Macau the “business language” is spoken.
It is possible to arrive at a banking institution and find financing. You can go to any law office and set up a company immediately with the same ease as we do in Portugal and other places. The process is very similar, fast, and efficient.
Sometimes we fail to disclose the advantage that Macau has, in which we can go through a dozen important contacts and people in just two days. This should be advertised as the advantage of Macau because it is really an advantage for an investor.

MDT – Is that also one of the big advantages of the GBA?
RB – The majority of the businesses will come to the neighboring markets – and I like to say markets because there is not one Chinese market, but many different markets. I would say that there is a huge attraction potential here.
Speaking only of the GBA, I think there is enough market for us to sell out all of our export capacity. This does not mean that the company should abandon other businesses they already have, but what it means is that those who want to can approach just this market. If [this market] was a country, it would be one of the biggest countries in the world in both area and population.
The GBA is for sure one of the possibilities with more potential for companies from Portuguese-
speaking countries.