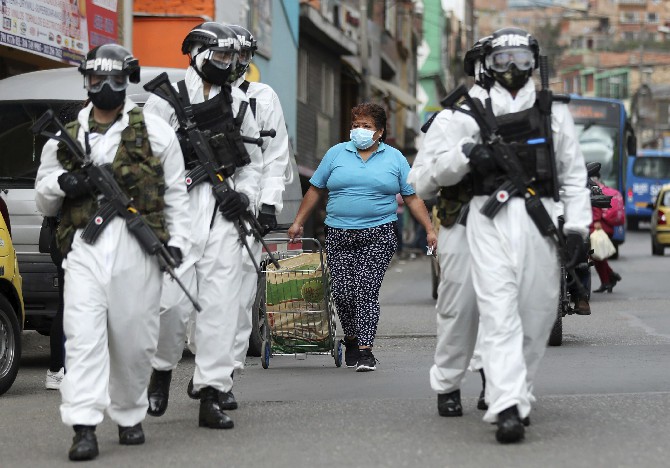 Soldiers in protective gear amid the COVID-19 pandemic patrol in Ciudad Bolivar, an area with high cases of the new coronavirus in Bogota, Colombia

An Australian state is toughening its punishments for anyone caught violating coronavirus quarantines, including jailing rule breakers for up to six months — a warning that follows rising virus cases worldwide and violations of restrictions that are now being further tightened.
The current set of fines for breaking a mandatory 14-day hotel quarantine for some visitors or lying about their whereabouts “appears not to be enough” in some cases, Queensland state Deputy Premier Steven Miles said.
With higher fines and a threat of six months’ imprisonment, “I hope that will demonstrate to the public just how serious we are about enforcing these measures,” Miles said.
Queensland shut its state borders to successfully contain the coronavirus outbreak, but reopened to all but residents of Victoria, Australia’s worst affected region, two weeks ago.
The city of Melbourne in Victoria recorded 270 new coronavirus infections overnight, with more than 4,000 cases now active across the state. Melbourne is one week into a six-week lockdown in an attempt to stop a spike in new cases there.
Health experts have warned that outbreaks that had been brought under control with shutdowns and other forms of social distancing were likely to flare again as precautions were relaxed.
Disney officials announced that Hong Kong Disneyland Park is closing Wednesday until further notice following the city’s decision to ban public gatherings of more than four people to combat newly spreading infections.
Hong Kong’s leader, Carrie Lam, announced new coronavirus-related restrictions on Monday after 41 out of 52 newly reported infections were locally transmitted cases. Hong Kong has reported 250 new cases since July 6. Lam urged the private sector to put in place work-from-home arrangements for employees.
In Thailand, where there have been no reports of locally transmitted cases for seven weeks, authorities have revised rules governing visitors from abroad after a breakdown in screening led to two infected foreigners posing a possible risk to public health.
The government said yesterday that diplomats will be asked to stay in state-supervised quarantine for 14 days, instead of self-isolating. And it is postponing the recently allowed entry of some foreign visitors so procedures can be changed.
“I am angry because this shouldn’t happen. They should have been quarantined, same as Thais who travel back have to be quarantined for 14 days. Why should this group of people get the privilege to skip quarantine?” said Panpen Sakulkru, a company manager who was among hundreds who lined up for virus tests in the Thai city of Rayong yesterday.
The cases that caused concern involved a member of an Egyptian military group and the young daughter of a foreign diplomat whose family returned from Sudan. Thai authorities revoked landing permission for eight Egyptian flights, and some schools and a mall were closed in the eastern province where the Egyptian man may have had contacts.
The new coronavirus first found in China late last year has infected 13.1 million people worldwide and killed more than 573,000, according to a tally by Johns Hopkins University. The actual numbers are thought to be much higher due to limited testing and the number of people who don’t show symptoms.
India, which has the third-most cases after the U.S. and Brazil, was rapidly nearing 1 million cases with a jump of more than 28,000 reported yesterday. It now has more than 906,000 and accumulated more than 100,000 in just four days.
Its nationwide lockdown has largely ended, but the recent spikes have prompted several big cities to reimpose partial lockdowns. A 10-day lockdown that began yesterday in the southern city of Pune will allow only essential businesses such as milk shops, pharmacies, clinics and emergency services to open.
The ebb and flow of the pandemic has governments scrambling to quash new outbreaks while attempting to salvage economies from the devastation of long shutdowns and travel restrictions.
South Africa imposed tighter restrictions including a ban on alcohol sales, mandatory face masks in public places and an overnight curfew, as a surge in new infections pushed it into the 10 worst-affected countries with nearly 300,000 confirmed cases, according to the Johns Hopkins tally.
In the U.S., flaring outbreaks have led officials in some areas to mandate mask wearing and close down bars and some other businesses to once again try to bring the pandemic under control.
Hawaii’s governor pushed back by another month plans to waive a 14-day quarantine requirement for out-of-state travelers who test negative for COVID-19.
“I know that this increases the burden on businesses here in the islands, especially small businesses. But we do believe that it is time to continue to protect the health and safety of our community,” Gov. David Ige told reporters. He cited rising numbers of local cases, “uncontrolled” outbreaks in several U.S. mainland states and a shortage of testing supplies.
The state has one of the lowest infection rates in the U.S., with 1,243 cases. Its quarantine requirement has virtually shut down tourism since it took effect in late March, pushing the unemployment rate in the islands to 22.6%, the second highest in the U.S. DENNIS PASSA & ELAINE KURTENBACH, BRISBANE, AP