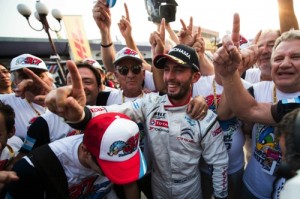 FIA World Touring Car Champion Jose Maria Lopez dominated the first Guia race in Macau, leading all the way and setting a new lap record in the process.
Starting from pole position, the Argentinean had little trouble keeping his advantage off the line, and steered clear of his nearest rivals all through Lisboa before edging away.
By the end of the opening lap, Lopez was 1.6 seconds ahead of nearest challenger Norbert Michelisz, and he steadily extended his lead until they started lapping backmarkers.
In the end, his advantage over Michelisz at the chequered flag was 2.741 seconds, as he secured his 10th victory of a brilliant maiden season in the FIA WTCC. “I am very happy,” said Lopez. “The 10th win of the season is something I could never have imagined when the year started.” 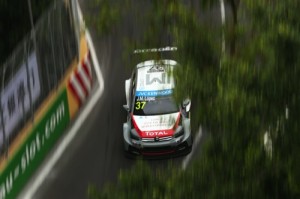 Michelisz did not have the pace to close on Lopez, and spent most of his race fighting to retain his second place – including a wild moment on the opening lap as he nearly lost control under braking at Matsuya.
In the early stages he came under pressure from Sebastien Loeb. But after Loeb launched a challenge on lap three at Lisboa, his French rival dropped down the order to sixth.
That left Honda’s Gabriele Tarquini right in Michelisz’s wheel tracks, but the Italian couldn’t get close enough to overtake.
In fact, Michelisz was at the head of a five-car train: Tarquini, Tiago Monteiro, Yvan Muller and Loeb all lapped closely together, but none of them were quite able to find room to pull off a move.
The only major incident of the race came at the end of lap eight, as Mehdi Bennani hit the barriers after colliding with backmarker Henry Kwong (who had crashed at Police three laps earlier) as he lapped him on the exit of the final corner.
Bennani was side-swiped and, despite trying to stop being spun out, he hit the barriers on the right.