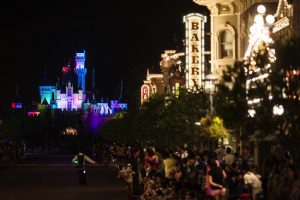 Hong Kong Disneyland cut jobs after sustaining its first loss in four years amid a slump in mainland visitors to the city.
Radio Television Hong Kong reported Friday that Walt Disney Co.’s theme park had fired fewer than 100 workers, citing unidentified people. Hong Kong Disneyland reviews operational needs from time to time to improve efficiency, the company said in a statement Friday.
“It is important for the company to maintain a solid foundation for sustainable, long-term growth,” Disney said. “We regularly make operational adjustments to ensure we deliver great guest and cast experiences in the most efficient way possible, in order to pave the way for future development.”
Business at the park has suffered amid political unrest in Hong Kong and a weaker economy on mainland China. Attendance fell 9 percent to 6.8 million guests in fiscal 2015 from a year earlier, according to an annual review released by the company. Hong Kong Disneyland employed more than 5,300 full-time and 2,500 part-time staff last year, making it one of the city’s largest employers.
Hong Kong Disneyland recorded a loss of HKD148 million (USD19 million) in the year that ended in early October. The resort had posted seven years of losses since its 2005 opening, before turning its first profit in 2012.
In March, managing director Andrew Kam resigned and was replaced by Samuel Lau, who was vice president of operations at the park.
Disney is continuing to invest in new attractions in Hong Kong including the forthcoming Iron Man Experience ride and the resort’s third hotel, Explorers Lodge. Still, there may be more competition coming from Disney itself as the company is set to unveil its first theme park on mainland China in Shanghai in June. That park is three times bigger than Hong Kong Disneyland. Rachel Chang and Christopher Palmeri, Bloomberg