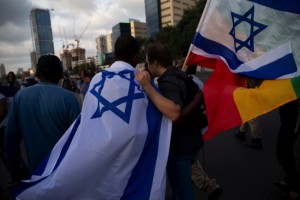 Israel’s ceremonial president said yesterday that an outbreak of violent protests by Ethiopian Jews has “exposed an open, bleeding wound in the heart of Israeli society” and that the country must respond to their grievances.
Reuven Rivlin spoke a day after thousands of people clashed with police in Tel Aviv. The protesters shut down a major highway, hurled stones and bottles at police officers and overturned a squad car. They were ultimately dispersed with tear gas and water cannons. More than 60 people were wounded and 40 arrested.
Simmering frustrations among Israel’s Ethiopian community boiled over after footage emerged last week of an Ethiopian Israeli in an army uniform being beaten by police.
Ethiopian Jews begin migrating to Israel three decades ago. Many complain of racism, lack of opportunity, endemic poverty and routine police harassment.
Rivlin said Israel was seeing “the pain of a community crying out over a sense of discrimination, racism, and of being unanswered.”
“We must look directly at this open wound. We have erred. We did not look, and we did not listen enough,” he said. “We are not strangers to one another, we are brothers, and we must not deteriorate into a place we will all regret.”
Sunday night’s violence was the second such protest in several days, and demonstrations are expected to continue. Prime Minister Benjamin Netanyahu was scheduled to meet yesterday with the beaten soldier and community leaders.
About 120,000 Ethiopian Jews live in Israel today, a small minority in a country of 7 million. Their absorption has been problematic, with many arriving without a modern education and then falling into unemployment and poverty as their family structures disintegrate. AP