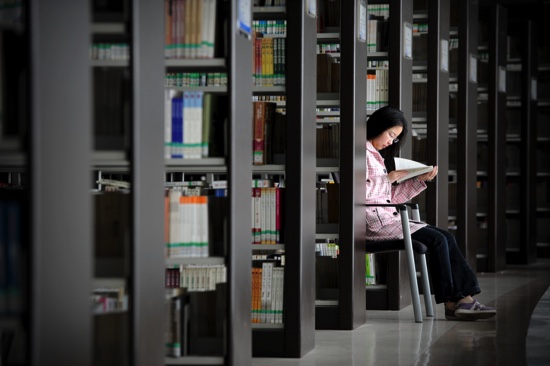 The Macau public libraries have registered a substantial growth in the number of book loans during 2015, revealed Ophelia Tang, director of Public Libraries Management Department within the Cultural Affairs Bureau (IC).
The IC organized a press conference to outline the program of the 2016 “Macau Library Week.” According to the information offered during the press conference, book loans registered a year-
on-year growth of about 25 percent when compared with 2014.
The number of requests for the libraries’ “Reader Card” grew exponentially, seeing an increase of 69 percent year-on-year. According to Tang, this “represents a growth of over 4,000 new readers.”
Tang claims the opening of the Taipa Library in 2015 has had “a very positive effect” on readership numbers.
The “Library Week” has been held annually since 2002 and is having its 15th year. The event also falls on the World Book Day on April 23, and aims to promote a culture of reading in Macau. It includes a series of activities promoted by the IC.
Cheong Kuai San, director of DSEJ’s Center of Permanent Education, said that besides the “Book Exchange” and “Back Periodicals Charity Sale,” that have become popular over the years, the DSEJ will promote several workshops, including some specifically aimed at parents and teachers also following the bureau’s efforts to promote reading in schools.
To further this goal, the main event will be a workshop held on May 7 and 8 with guest Alice Tung, from Hong Kong’s Association of Innovative Reading. The workshop will focus on strategies for the promotion of creative reading.
The extensive program is set to kick-off on April 23 in the Old Court Building and run until the end of May. Further information can be found at a purpose-­built website, with versions in English, Portuguese and Chinese (www.macaulibraryweek.gov.mo).

patane library to open this year

The new Patane Library is set to open before the end of 2016, according to Ophelia Tang. “In July, we are planning to start work on the interior decoration,” she said. On a different note, Tang revealed that the trial version of the system which will allow some public libraries to be open round-the-clock would start at the end of September. The first library to work with this system will be the Red Market Library. She also noted that the system will be “automatic” and will not require staff from the library to be physically present overnight.