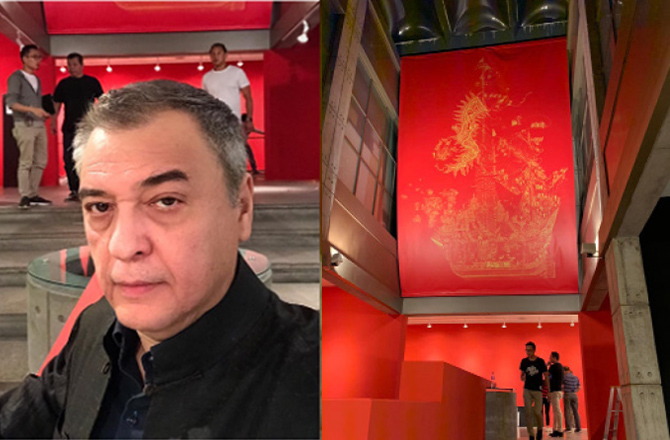 For nearly four months, distinguished Macau architect and artist Carlos Marreiros will be exhibiting the boat on which he painted 108 individuals, along with a “library” of his 50 books, to celebrate both the 20th anniversary of the establishment of the Macau Special Administrative Region and the principle of inclusion.
“Red December – Exhibition of Carlos Marreiros,” organized by the Cultural Affairs Bureau, will be inaugurated today, at the Tap Seac Gallery. The organizer and the artist look forward to welcoming all art lovers to the exhibition.
Marreiros’ latest artwork, which is a large boat, is the core of the exhibition. It depicts a scene where Chinese and Western historical figures from different periods of time are gathered together, indulging in pleasant conversation with each other. The work visualizes the utopia in the artist’s imagination, where different cultures exist harmoniously in an inclusive society.

“This exhibition is composed [of] two main [elements]: visual arts and literature,” explained the artist. “I love both, because art is for elevating the soul. Art provides elevation for people and society.”
This is the foundation on which he has prepared this exhibition. “I love art, whether it is visual arts, music, literature, as long as it elevates our spirits. Based on this principle, I have prepared this exhibition,” Marreiros said.
Many artworks have taken surprising, if not frightening, forms to express their views. Marreiros, however, is really not a big fan of this kind of presentation. “[Merely shocking] art[work]s mean nothing to me.”
The artist, who considers himself a storyteller, tries to retell stories he likes, some of which he has liked almost all his life.
“I have learned a lot [reading] the works of celebrated Colombian writer and Nobel Prize Laureate Gabriel García Márquez, author of the wonderful book ‘One Hundred Years of Solitude’,” Marreiros recalled. “In the book, he invented a city with invaders, educators, politicians, thieves and so on, and fictional stories regarding this big city that he invented.”
This is part of his fountain of inspiration, Marreiros said. “I reinvented Macau into an inclusive society, and I tell stories – some real, some self-invented; it is a graphic romance.”
Marreiros will depict some regular people going about their daily lives. They need not be famous to make it onto the boat. After all, it is the inclusiveness that is important.
“From the casino man who has a lot of money which attracts a lot of girls to him, to the dreamer who comes from Europe to Asia just wanting to fall in love,” the artist said as he described the characters.
All these people will be flying, in Marreiros’ words, along with the boat. He describes the boat as flying in space.
“[It depicts people from] the very beginning of Macau. From the fishermen and farmers, to Jorge Álvares, [who is] the first European arrival [and] Portuguese navigator, [as well as] traders and the Society of Jesus’ priests,” he said.
It is not nationality which offers a “boarding pass” onto the boat. “Mateus Ricci, Carlo Spinola, the architect of the Ruins of St. Paul’s (the then St. Paul’s Church), and a Chinese Buddhist who converted to Catholicism through the influence of the Jesuits will all show up,” said Marreiros as he went on with his explanation.
Also making it onto the boat is Lin Zexu, the opium-fighting viceroy from the Qing dynasty who is widely considered to be a hero by the Chinese. Other modern characters that Marreiros admires were also drawn.
“For instance, I love literature [by] Lu Xun, Oscar Wilde, [James] Joyce, George Orwell, Fernando Pessoa, our fantastic Macau poet, Camillo Pessenha, and many others,” he said. “Even Cristiano Ronaldo shows up [on the boat]. [And] of course, [there are] my childhood heroes, such as [Chinese martial arts master] Wong Fei Hong.”
Marreiros said he was trying to make a feast of joyful and humorous situations. However, in these situations, serious stories are told.
“For instance, there is a reference to the Joint Declarations China signed for the handover of Macau and Hong Kong,” Marreiros said. “I [portrayed] Deng Xiaoping, [Portuguese poet] Camões and Shakespeare, with Camões symbolizing Portugal and Shakespeare [symbolizing] the U.K.”
Marreiros tried to add a lot of fun into the scene. “They are seated on three sofas, flying toward the top, or the middle, of the big boat, enjoying a smoke,” he said. He also included felines, which is not done primarily to attract cat lovers. “Cats [are around them] because Deng has a fantastic motto: ‘whether black or white, a cat is good as long as it catches the rats’.”
Besides the “big boat,” in Marreiros’ words, the artist will also be sharing his “library.” The artist will show around 50 of his logbooks and diaries to viewers. 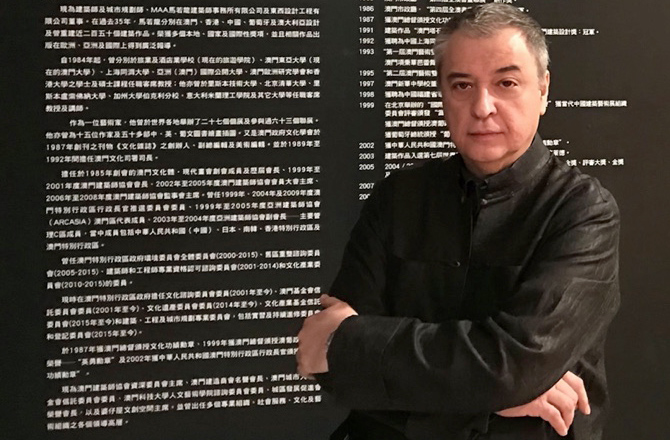 “[They are] full of drawings, written statements and collectibles,” he said. These collectibles are not all expensive. “Perhaps a bus or museum entry ticket.” Marreiros stressed that there is a big collection of his memorabilia, and that he is showing part of his collection from the last 20 years.
Marreiros is really a big lover of reading, as he quoted Argentine writer, Jorge Luis Borges, whom he said he loves, to explain the source of his inspiration for the “library” part of the exhibition. “A book is a physical object in a world of physical objects. It is a set of dead symbols,” Borges once said, which to Marreiros means “a book is nothing until the time a reader comes, picks it up and starts reading it. After the reader discovers the [poetic sense] behind each word, the book then has its meaningful presence,” he explained.
He also said he feels the same as Borges, in the sense that the latter imagines paradise as a library.
“This time I’m [trying to share] my books with the right people, who can discover the poetic moments behind words. This is very Borgian,” said the artist. “Every time I do an exhibition, I do something different, because in my point of view, fine arts today are very boring.”
The exhibition, as well as the boat, is called Red December “because the exhibition was conceived upon one idea: the 20th anniversary of the establishment of the Macau Special Administrative Region. It is in December,” explained the architect-artist.
“At the same time, red is a color [symbolizing] glory and joy, for both Chinese and Westerners. In the west, red is usually [associated with] kings, festivals and victory,” he elaborated. “In Chinese, the name of the exhibition is ‘Hei Hong Laam’. Hei means happiness. Hong means red, and laam means boat. The Chinese name is very poetic.”
“Red December – Exhibition of Carlos Marreiros” will be held from 9 November to 13 February 2020 at the Tap Seac Gallery, located at No. 95, Avenida do Conselheiro Ferreira de Almeida. The exhibition is open daily from 10 a.m. to 9 p.m., including public holidays. Admission is free.