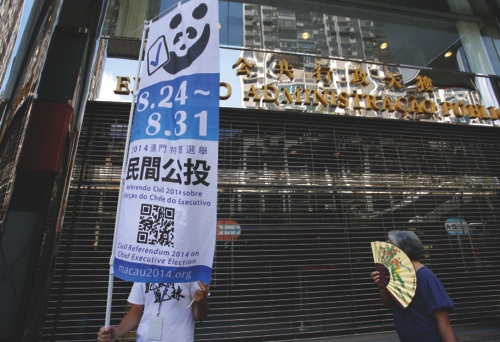 The unofficial referendum on universal suffrage launched by three pro-democratic associations continues to draw residents’ attention, with 6,863 people having voted as of press time yesterday. The Office for Personal Data Protection’s claim that activists are breaching privacy laws for collecting and processing people’s data continues to raise doubts.
A legal scholar told the South China Morning Post that “it is hard to justify the detentions” on those grounds.
President of the Open Macau Society, Jason Chao, and four other activists, including New Macau Association member Scott Chiang, were detained by police authorities on Sunday and released later that evening.
Jason Chao was heard by the Public Prosecutions Office (MP) on Monday, and is suspected of aggravated disobedience for not complying with an order issued by The Office for Personal Data Protection (GPDP), which demanded that organizers stop collecting residents’ personal data for the purpose of an unofficial referendum.
Sten Verhoeven, assistant professor at the University of Macau’s Faculty of Law, recalled that data was collected during the ballot to ensure that people wouldn’t vote twice.
In his opinion, residents provided their personal data willingly: “As long as a person gives his or her consent, the data can be collected,” he assured.
“The protection of privacy deals with unwarranted and undesired intrusions in one’s personal life. When one validly consents, there can be no intrusion.” He added that, since there’s no suggestion that residents’ data would be used for more purposes other than those stated, “It seems questionable to arrest and detain people on these grounds.”
He also recalled that companies, non-profit organizations and social network sites all collect personal data on a daily basis.
The MP has so far only heard Jason Chao, and has ordered the political activist to report regularly to authorities while the case is under investigation. Jason Chao is not allowed to leave Macau for more than five days without notifying authorities.
Yesterday, the judge and president of the Electoral Affairs Commission for the Chief Executive (CAECE), Song Man Lei, declined to comment on the GPDP’s actions.
Open Macau Society, Macau Conscience and Macau Youth Dynamics launched an unofficial referendum on Sunday in order to gauge support for democratic reforms. However, vote-collecting activities in the streets were halted when police arrested four activists. Volunteers had gathered in five different locations to help citizens vote on the referendum using tablets, since they were not allowed to set up physical polling stations.
The poll is due to be open online, via the macau2014.org website, until Saturday, a day before the Chief Executive’s election takes place.
The referendum has drawn attention from international media outlets, with The Guardian and the BBC, among other media outlets, reporting on Sunday’s arrests. The detentions were also highlighted by Portuguese daily Público, the front page of which read, “Macau’s democracy referendum marked by arrests.” CP