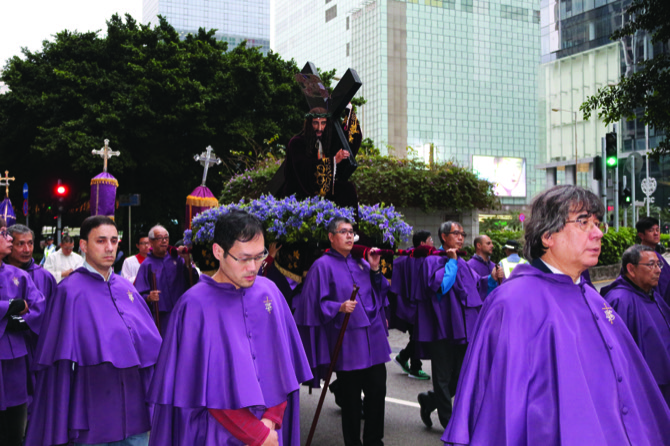 In this 2016 archive photo, a Catholic procession is seen walking through central Macau

Persecution of the Christian community continues in China, with some watchdog groups expressing that ongoing pressure against religious groups is at its most intense since the Cultural Revolution.

Although the communist country constitutionalized freedom of religious beliefs, including the protection of “normal religious activities” in its Article 36 in 1982, the ongoing crackdowns seem contradictory to this law.

A local expert believes that such destructive behavior seems to be based on fear, insecurity and incompetence in dealing with religion and spirituality, which endangers the goal of a “harmonious” China.

Fr. Franz Gassner, coordinator for the Department of Catholic Theology at the University of Saint Joseph, believes that the crackdowns are without justified cause.

“The crackdown reveals the other side of the coin; the lack of knowledge and acquaintance of party and state in matters of religion and spirituality,” he told the Times.

“In the long run, by this thinking and practice, the party will again harm China’s people and their development, similar to the one-child policy, which is turning out to be a disaster in the near future. In fact, both policies have the same father and mother: a lack of consistent philosophy and science,” Fr. Gassner added.

In June, Pope Francis voiced optimism on the Vatican and China’s relationship, noting that the relationship was “at a good point.”

Yet according to several reports, the Central Government has been raiding Christian congregations in Beijing and several provinces, burning crosses and bibles, closing down churches and forcing believers to renounce their faith.

China’s Catholics are split into two camps: an official church led by a state-supervized organization, and a so-called ‘underground church’ run by a bishop appointed by the Pope.

On Sunday, China banned a popular underground Protestant church in Beijing as part of the crackdown to eradicate underground churches.

According to the Beijing Chaoyang district civil affairs bureau, the church was breaking rules as it organized events without first registering.

Chinese law stipulates that worshipers can only conduct activities in congregations registered with the authorities. Yet a significant number still defy government restrictions, conducting underground or home church gatherings.

Although a constitutional article was created to supposedly protect these nationals’ right to choose their religion in the communist country, churches are facing a wave of harassment and pressure as new regulations targeting these Christian churches came into force in February.

This new set of regulations heightened punishments for unofficial churches, leading 30 churches in Beijing to issue a joint statement complaining of “unceasing interference” and the “assault and obstruction” of believers’ regular activities since the law came into effect.

“The churches – underground or over ground – should keep going to engage in an honest and deep dialogue on many levels, wherever possible. This is most crucial, a sort of Chinese ecumene,” said Fr. Gassner.

“Here in Macau we should treasure the freedom we experience in spiritual and religious matters. We should increase our efforts to assist other people and societies in this regard, especially in mainland China,” he added.

Meanwhile, some argue that these ongoing crackdowns are nothing new as they have been going on for decades.

Aurelio Porfiri, Rome correspondent for Catholic newspaper O Clarim and author of books and articles about China and Christianity, believes that there are some regions in China where control is tighter than others.

“In Chinese tradition, religion was also in control of the Emperor, the central power. So I guess that for the Chinese government, [it] may be difficult being relaxed about religious independence,” said Porfiri.

“Being underground is a reaction to the central power that is seen as hostile. For Catholics that was and is a way to remain faithful to the Apostolic See,” Porfiri explained.

Porfiri recalled that the Chinese government recently introduced a major impediment to online evangelization, which shows that there has been no progress in China’s freedom to evangelize.

“Many observers [have] noticed that this may be a reaction to control the huge religious awakening in China. […] I hope that it will be possible to put an end soon to all difficulties,” he added.

Yet for political commentator Larry So, such crackdowns occur because religion remains a powerful form of ideology. He said that religion threatens the government’s control as these ideologies affect the behavior of people.

“China will look at any groups if they were not in accordance with the Chinese religious regulations. Basically, the philosophy of China in terms of how they look at religion is that they look at it as some kind of ideology guiding people towards everything good, equality and all these things,” So said.

“In terms of the political angle and community level, religion can be very powerful. […] These ideologies really change the people’s minds and behaviors,” he added.

So further expressed that from the communist party’s point of view, “brainwashing” could also occur.

He noted that there could be fears the Christian community may not be in favor of the country’s political development, highlighting the crackdowns that occurred against the Tibetan independence movement, which is based on religious ideology.

“It is political. [It is seen] as a kind of [replacement for the] Chinese government. They do not want to see some other kind of grassroots opposition forces [that lead] towards some kind of independence,” said So.

When questioned on whether there would be progress regarding full freedom of religious activities, So explained that the Chinese government is trying to compromise with the Roman Catholic church, as all other religions are properly coordinated in China, including Buddhism and Taoism.

Many argue that this is the most severe systematic suppression of Christians since religious freedom was written into the constitution in the 80s, yet So disagrees, pointing out that it has been more or less the same since Mao Zedong’s rule ended.

THE CATHOLIC Center located near Rua do Campo caught fire on Tuesday, with the Judiciary Police (PJ) deeming the fire suspicious. Authorities are investigating the suspected arson case, as cigarette butts were found on the ground floor of the abandoned building. Pieces of wood inside the metal shutter were set alight.  The PJ statement recalled that a passer-by witnessed smoke coming from inside a metal trellis shutter on the ground floor, yet it was already extinguished when firemen arrived at the scene. The center has been reportedly empty for more than 20 years.