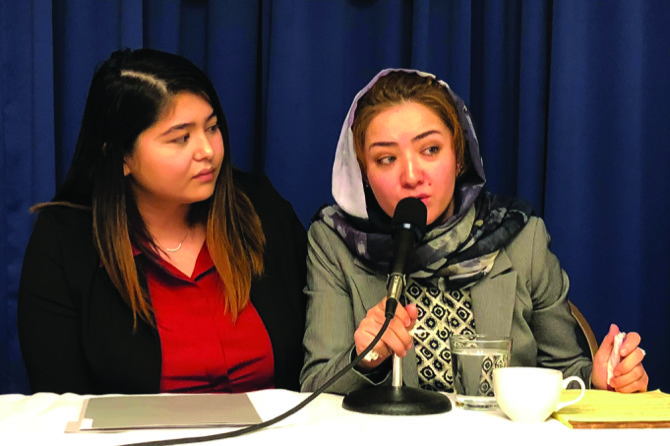 A member of the Uighur minority yesterday [Macau time] detailed torture and abuse she says she experienced in one of the internment camps where the Chinese government has detained hundreds of thousands of religious minorities.

Mihrigul Tursun, speaking to reporters in Washington, said she was interrogated for four days in a row without sleep, had her hair shaved and was subjected to an intrusive medical examination following her second arrest in China in 2017. After she was arrested a third time, the treatment grew worse.

“I thought that I would rather die than go through this torture and begged them to kill me,” Tursun, 29, told reporters at a meeting at the National Press Club.

Human rights groups say China has detained up to 2 million Uighurs to promote what the government calls “ethnic unity” in the country’s far west. Over 270 scholars from 26 countries released a statement drawing attention to “mass human rights abuses and deliberate attacks on indigenous cultures” taking place in China.

“In the camps, these detainees, most of whom are Uighur, are subjected to deeply invasive forms of surveillance and psychological stress as they are forced to abandon their native language, religious beliefs and cultural practices,” the statement said. “Outside of the camps, more than 10 million Turkic Muslim minorities in the region are subjected to a dense network of surveillance systems, checkpoints, and interpersonal monitoring which severely limit all forms of personal freedom.”

Raised in China, Tursun moved to Egypt to study English at a university and soon met her husband and had triplets with him. In 2015, Tursun traveled to China to spend time with her family and was immediately detained and separated from her infant children. When Tursun was released three months later, one of the triplets died and the other two developed health problems. Tursun said the children had been operated on. She was arrested for a second time about two years later.

Several months later, she was detained a third time and spent three months in a cramped, suffocating prison cell with 60 other women, having to sleep in turns, use the toilet in front of security cameras and sing songs praising China’s Communist Party. Tursun said she and other inmates were forced to take unknown medication, including pills that made them faint and a white liquid that caused bleeding in some women and loss of menstruation in others. Tursun said nine women from her cell died during her three months there.

One day, Tursun recalled, she was led into a room and placed in a high chair, and her legs and arms were locked in place.

“The authorities put a helmet- like thing on my head, and each time I was electrocuted, my whole body would shake violently and I would feel the pain in my veins,” Tursun said in a statement read by a translator.

“I don’t remember the rest. White foam came out of my mouth, and I began to lose consciousness,” Tursun said. “The last word I heard them saying is that you being an Uighur is a crime.”

She was eventually released so that she could take her children to Egypt, but she was ordered to return to China. Once in Cairo, Tursun contacted U.S. authorities and, in September, came to the United States and settled in Virginia.

The Chinese Embassy in Washington did not return a request for comment. Chinese authorities have denied that the internment camps exist but say petty criminals are sent to “employment training centers.”

The State Department estimates that since April 2017, the Chinese government has detained 800,000 to possibly more than 2 million Uighurs, Kazakhs and other Muslims in political re-education camps.

“The United States will continue to call on China to end these counterproductive policies and free all those arbitrarily detained,” the State Department said. “We are committed to promoting accountability for those who commit human rights violations and abuses, including by considering targeted measures against Xinjiang officials.” Maria Danilova, Washington, AP