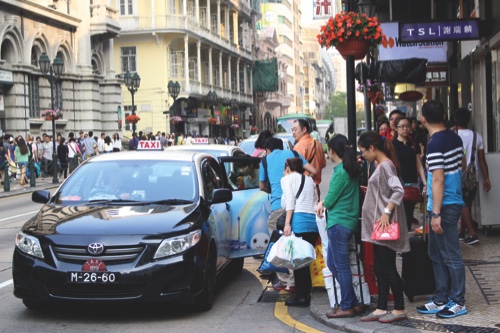 A Macau resident claims that she was “aggressively harassed and chased” by a taxi driver yesterday as she attempted to catch a cab with a group of friends and her seven-year-old son. Rute Isabel de Azevedo told the Times that she has filed complaints to the Judiciary Police (PJ), accusing the taxi driver of assault, harassment, threatening behavior and extortion.
According to a press release issued by the Macau Taxi Passengers Association, which operates the Macau Taxi Driver Shame Facebook group, Ms Azevedo, a member of MTPA, said she had been attending the Macau Food Festival at the Macau Tower, and that she was ready to leave at around 11.30 p.m.
With a group of female friends and her seven-year-old son, she was finding it hard to get a bus, and said taxis in the area were practicing so-called “fishing,” trying to look for particular clients who are willing to pay more.
After trying unsuccessfully to get a taxi for around one and a half hours, the group decided to walk from the Macau Tower to the Casino Lisboa area. The victim said that while walking, they saw a free taxi, and tried to hail it. “He kept asking where we wanted to go, and we asked him back: Are you free or not?”
Tensions soon escalated to the point that the taxi driver allegedly drove into Ms Azevedo while she attempted to cross the road at the pedestrian crossing. “I was not hurt, but the taxi did hit my leg. Of course, I yelled and my friend started taking pictures [of the taxi],” she told us.
The driver continued to use his taxi as a weapon, threatening the group, and inching the car towards her. Ms Azevedo said she also hit the taxi, but without sufficient force to cause any major damage. The driver then left the car and walked toward the group, swearing at them and attempting to take pictures of them, too.
She recalled that he kept saying they owed him money for damage to the vehicle, but Ms Azevedo claims that there was no damage at all. “He even had a small dent in the back of the car, but I was not the one responsible for that. I had not even been near the back of his car,” she said.
The Macau resident claimed that the taxi driver also dropped his mobile phone on the floor and wanted them to pay for it. He physically confronted them to prevent the group from leaving.
Ms Azevedo said her seven-
year-old son was “really scared” and that two of her friends managed to take him to a safe place to meet her husband. “We didn’t want to walk home, because otherwise the taxi driver would know where I live,” she said.
She added that her son is “traumatized” by the experience and was afraid to go to school the next morning.
After her friends left with her son, she called the police, while still being chased by the taxi driver all the way from the Macau Tower to the New Yaohan department store area.
She explained that a police officer from the Traffic Department of the Macau Security Police (PSP) arrived at the scene, and the taxi driver was forced to pay a fine. The driver was held at the police station so that the victim could safely return home.
Ms Azevedo does not know how much he paid as a fine. She also went to the PJ offices to press charges. “I have had many issues with taxi drivers in Macau. Once, a taxi driver chased me with a spanner. I did not press charges back then. But enough is enough. They cannot get away with these actions,” she said.
The victim is willing to take the case “to its last consequences.” The case is likely to reach a courtroom, and Ms Azevedo said she would be filing another complaint accusing him of “perjury.” “I asked PJ officers if I could also accuse him of perjury, as he denied the whole story and said that I had damaged his car, which is not true. Authorities said he has the right to tell his version of the story and only when the case reaches court, I can accuse him of perjury,” she explained.
The president of the Macau Taxi Passengers Association, Andrew W Scott, said that “while many of our members have complained about lack of police action in taxi enforcement, on this occasion we applaud the Macau police in taking action against this rogue and aggressive driver harassing a group of women and a 7-year-old child in the early hours of the morning.”
“It must be terrifying for women to face these aggressive taxi drivers late at night,” Mr Scott added. He went even further to suggest that it’s not melodramatic “to say it might only be a matter of time before someone is killed in an incident with a Macau taxi driver.”
He concluded by saying that “one of the reasons we have taxis is so that people have a viable alternative to drink driving.” However, he recalled how “people are standing in the street in the path of oncoming taxis to force them to stop. People are hitting and kicking taxis as they drive past.” He said that as much as he discourages it, “it’s not hard to see this escalating to the point where we get a very serious assault, or an accidental death by a taxi running over a passenger.”
The PSP did not reply to the Times’ queries regarding the incident, but the PJ said they did not have a record of the mentioned case.