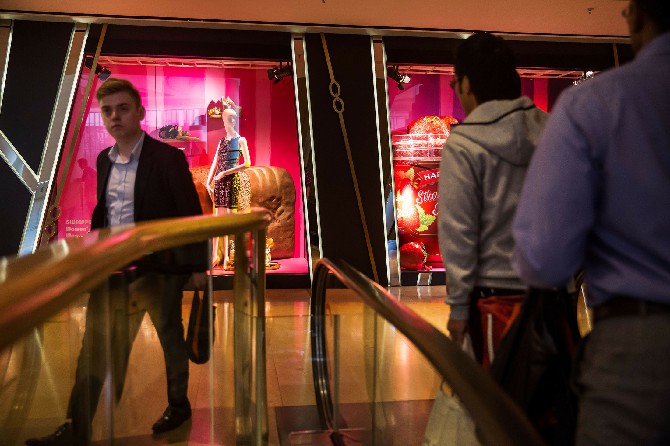 The inaugural Guangdong-Hong Kong-Macao Greater Bay Area Shopping Festival will not only help rekindle Hong Kong consumers’ passion for shopping, but also provide opportunities for retailers hoping to establish wider markets through e-commerce, experts said.
The online festival, which began on Sept. 2 and runs for three weeks, comes as Hong Kong recovers from the heavy economic blow of the COVID-19 pandemic. Retail sales in Hong Kong totaled $42.11 billion in 2020, a drop of 24.3% on the previous year, according to official statistics.
The grim situation is not only associated with a sharp decline in the number of big-spending tourists, but also the dampened enthusiasm of Hong Kong shoppers.
“With preferential policies, including free delivery and 2,000 self-pickup spots in Hong Kong, the festival can in some way overcome the long-lasting logistics obstacles due to border checkpoints’ closures,” said Bruce Pang, head of macro and strategy research of China Renaissance Securities (Hong Kong).
“It allows mainland people, who would have traveled to Hong Kong for a shopping spree, to do it online. Hong Kong residents can also lay their hands on bargains from mainland merchants without worrying about hassles in delivery.”
If the mechanism designed for the festival yields desirable outcomes, it can become a fixture that serves consumers on both sides of the border in the future, Pang said. The 298,000 brands available in the shopping festival are handpicked and well-established.
“Through the festival, Hong Kong consumers will be able to learn more about premium homegrown brands,” which they might have missed out on in the past, said Terence Chong Tai-leung, executive director of the Lau Chor Tak Institute of Global Economics and Finance at the Chinese University of Hong Kong.
Chong said the festival may inspire Hong Kong retailers and independent shop owners to see mainland e-commerce platforms as a sound alternative to the bricks-and-mortar retail model. “It will enlarge their market, increase their brand recognition and drive up their sales,” he said.
The festival also serves as a touchstone for merchants to assess the quality of their products and consumers’ preferences said Mark Lee, research director at Asia Pacific Institute for Strategy. “By comparing their own products and services with the brands featured in the festival, they can identify their shortcomings and adapt accordingly to consumers’ tastes,” Lee said.
He said that mainland consumers today are more discerning and tasteful. “To make their commodities popular with mainland consumers, Hong Kong merchants have to improve their products and refine their service to stand out,” Lee said.
Pang said the festival is a new foray into the bay area’s regional economy and explores how to achieve “dual circulation”, which allows domestic and overseas markets to reinforce each other, with the domestic market as the mainstay.
The vision for dual circulation in the bay area is stressed in the Plan for Comprehensive Deepening Reform and Opening Up of the Qianhai Shenzhen-Hong Kong Modern Service Industry Cooperation Zone, which was promulgated by the central government on Monday.
Hong Kong Chief Executive Carrie Lam Cheng Yuet-ngor welcomed the plan as a vehicle to foster Hong Kong-Shenzhen cooperation at a higher level, under which the two cities can serve as “dual engines” to drive development in the bay area.
The bay area occupies less than 1% of China’s land area but contributes 12% of the country’s GDP.
Its year-on-year GDP growth rate was 4.4% in 2019, overtaking the San Francisco Bay Area (4%) and the Tokyo Bay Area (1.4%), which speaks volumes for the region’s purchasing demand and capacity, Pang said.
“Guangdong province, hailed as China’s ‘world factory’, has the potential to become China’s ‘world market’,” Pang said.
Hong Kong, an integral part of the bay area, can tap into the region’s advantages in dual circulation and capitalize on the mainland’s well-developed e-commerce industry to increase the presence and influence of Hong Kong brands, Pang said.
However, both Chong and Lee said that a one-off event cannot dramatically reshape Hong Kong consumers’ spending habits on its own. While, it could help locals recover the thrill of the shopping, the effect is likely to be temporary, they said, adding that it should become an annual event. WANG YUKE, Hong Kong, Xinhua