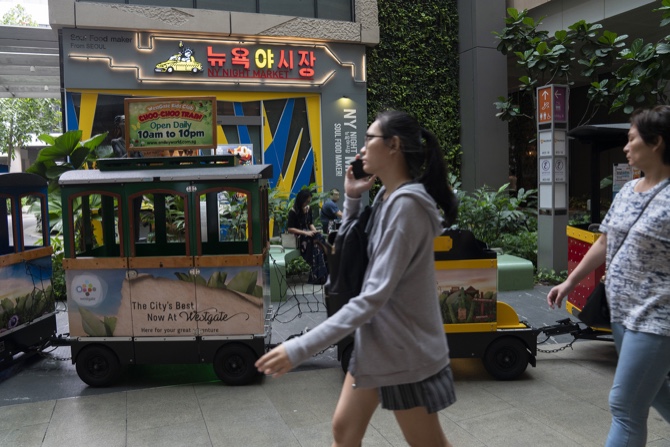 Online shopping in Singapore is lackluster even after Amazon Inc. debuted its Prime service in mid-2017. The island’s malls are trying hard to keep it that way.

With some of the nation’s biggest mall operators reporting falling rents and rising vacancies, landlords, just like those elsewhere in Asia and the U.S., are being forced to reposition. They’re making room for yoga studios, boxing gyms and climbing walls – plus expanding their food and beverage options – to make sure people come for the dining and fun, and hopefully, stay for some shopping.

Centers around the world have tried similar stunts in recent years – often to no avail – but in tiny Singapore, where it’s often joked that shopping is the national sport, they do have an advantage. Online shopping penetration ranks behind Slovakia and Greece in the city-state, putting it relatively low down for developed economies, and the government is weighing a tax on e-commerce imports from 2020.

There are early signs the gambit is working – at least in terms of driving up traffic. At VivoCity, the island’s largest shopping center, visitor numbers rose 3.1 percent in the six months through Sept. 30 from a year earlier as owner Mapletree Commercial Trust added an arcade complete with a full-sized bumper car ring. Yet actual shopping fell slightly.

In other malls, visitors can spend a day taking a cooking class or participating in a complimentary yoga session. At CapitaLand’s Clarke Quay, you’ll be able to sip margaritas while playing a round of indoor mini golf. CapitaLand’s Westgate mall and its soon-to-open revamped Funan mall will feature an ABC Cooking Studio, where people can sign up for bread-baking lessons or classes on how to make wagashi, traditional Japanese sweets.

Shopper traffic at CapitaLand Mall Trust, which has a portfolio of 15 centers, declined 1.8 percent in the nine months ended September from a year ago while tenants’ sales per square foot climbed 0.5 percent over the same period.

“While the current market share of online sales is small, its pace of growth will only speed up as tomorrow’s consumers enter the market,” CapitaLand Chief Executive Officer Lee Chee Koon said in September at a ceremony to mark the new Funan center. “Brick-and-mortar businesses must go beyond passively selling products and services to generating quality retail experiences and emotional connections.”

Amazon’s Prime launched in July last year and almost immediately faced delivery delays – a costly snafu in a market where the nearest store or mall is just minutes away for most people. Singapore vies with Hong Kong for the most retail space per capita in Asia.

Amazon was the sixth-ranked online shopping app on the Apple Store by active users in the third quarter, behind homegrown competitors such as Qoo10, data compiled by iPrice Group show.

Malls that can’t effectively incorporate activity-based tenants risk falling behind, both in terms of footfall and retail rents, according to Cushman & Wakefield Inc. Millennials in particular are a target of non- shopping ventures.

But while the plethora of new activities have helped drive traffic, the uptick has failed to translate into real money. Mall rents have dropped 18 percent over the past year and vacancies rose in the quarter through September, to 7.6 percent, Urban Redevelopment Authority data show.

And with an estimated 803,000 square feet of retail space coming online in the next 15 months, rents will remain under pressure, according to Huey Ying Tay, head of research for Singapore at JLL. “Until brick-and-mortar retail stores manage to convert foot traffic into in-store purchases, rentals are expected to remain subdued,” she said. Pooja Thakur, Bloomberg