Retired cardinal Zen hits back at Vatican over deal with China 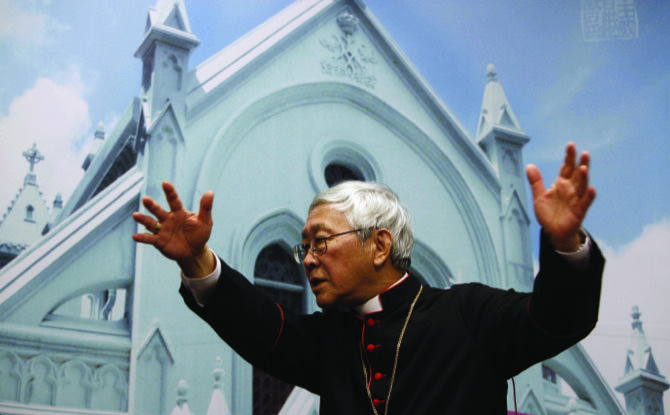 The retired archbishop of Hong Kong has slammed the Holy See’s negotiations with Beijing as a “catastrophe” that would bring suffering to millions of worshippers, as a bitter dispute inside the Roman Catholic Church over its future in China escalates in a dramatic fashion.

Cardinal Joseph Zen warned in a blog post this week that some Chinese Catholics who follow so-called underground churches are at risk of arrest even while the Catholic Church pushes for a historic breakthrough in relations with China’s ruling Communist Party.

Zen, a leading critic of the Vatican’s outreach to China, revealed in a statement last month that the Vatican had asked a legitimate “underground” bishop to stand down in favor of an excommunicated one favored by Beijing — a reshuffle that he suggested was orchestrated by church officials without the pope’s full knowledge.

Zen, 86, doubled down earlier this week and denounced church officials for betraying Chinese worshippers in what amounted to a highly unusual attack from a clergyman against the Holy See.

“Mainland brothers and sisters fear not losing all they have, the prison cell or shedding their blood,” Zen wrote. “Their greatest suffering is being sold out by their ‘loved ones.’”

In an extraordinary escalation, Zen also criticized Secretary of State Pietro Parolin, the official charged with negotiations with Beijing, as a “man of little faith” who did not understand the “true suffering” of persecuted Chinese Catholics.

The proposed changing of the bishops was the clearest evidence yet of the Vatican’s effort to reach a deal with China, a country with an estimated 12 million Catholics. Of those, about half worship in “underground” churches that recognize only Rome as their highest authority while the rest belong to state-authorized churches with clergy named by Beijing.

The Vatican, particularly under Pope Francis, has been keen to reach a deal with the Chinese government and unite the churches. A sticking point in secret negotiations over at least the past year has concerned whether Rome or Beijing has final say over bishop appointments. China’s Foreign Ministry has said the government supports dialogue and advancing ties with the Vatican on the basis of “relevant principles” — a likely reference to Beijing holding final say over appointments.

Zen said the Vatican had “given in” to the Communist Party by seeking to replace Shantou Bishop Peter Zhuang Jianjian with Bishop Joseph Huang Bingzhang, who is backed by the state. Last month, he disclosed the behind-the-scenes discussions to replace bishops and said he had been so upset that he traveled to Rome to raise objections with Francis.

“Priests and congregants will have many long nights of suffering over the prospect of obeying and respecting those priests who were illegitimate today but will be legitimized by the Holy See tomorrow, having been approved by the government,” Zen wrote.

An official from the Chinese Patriotic Catholic Association, a government body supervising state-authorized Catholic congregations, said he could not respond to Zen’s claim that Shanghai priests have warned their followers against attending Mass.

The Vatican had no immediate comment on Zen’s latest blog post. But it said last week it was “surprising and regrettable” that some members of the church were fostering “confusion and controversy.”

In an editorial Tuesday, China’s state-run Global Times newspaper said Beijing and the Vatican would establish diplomatic relations “sooner or later” and that a deal would be “tremendously beneficial to Catholics.” Without directly naming Zen, the paper also rebuked “a few radical religious groups who have no right to intervene in bishop appointments.”

“Pope Francis has a positive image with the Chinese public,” the editorial concluded. “It is expected he will push China-Vatican ties forward and solve related problems with his wisdom.” Gerry Shih, Beijing, AP