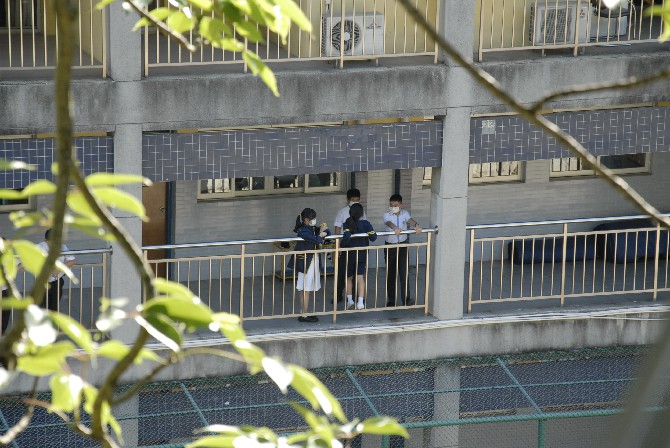 The return of students to non-tertiary education facilities in Macau may be delayed, Wong Ka Ki, Department Head of Non-Tertiary Education from the Education and Youth Development Bureau (DSEDJ), admitted yesterday during the regular briefing from health authorities on the Covid-19 situation.
According to Wong, depending on the development of the pandemic in coming days, the start of the new academic year planned for the beginning of next month might be subject to some adjustment and delay, he said.
In limbo are approximately 3,000 cross-border students and other school staff members, including teachers, who are likely to be unable to return to Macau 14 days ahead of the launch of the new academic year as the DSEDJ had previously expected.
According to the same official, no decision has yet been taken on the matter and the plan for the start of the school year is still in place, although he warned that changes may be made as the date approaches.
“Our priority is to ensure the safety of our students and school communities,” Wong said while explaining the reasons behind the potential postponement.
At this point, the DSEDJ department head preferred not to speculate on the possible length of any postponement nor whether any delay would apply to all schools or just to particular cases.
“We plan that if the situation [with Covid-19] becomes unstable, we can consider the postponement of the start of the school year,” Wong remarked.
Questioned on the matter, Wong also noted that, according to the DSEDJ plan, students, teachers and other school staff members should undertake at least one nucleic acid test (NAT) to guarantee that there is no risk of contagion.
Expanding on the subject, he admitted that the main target of the NAT requirement could be local members of the school community, “since the cross border ones must already [according to regulations] repeat the test every seven days.” Despite his statement that no final decision had yet been reached on the matter, Wong said that the DSEDJ services and the Health Bureau, are “still evaluating.”

Covid-19 | No consensus yet reached on vaccine mixing, recognition for Sinopharm vaccine

Dr. Tai Wa Hou, medical director from the Conde de São Januário Hospital Center and coordinator of the Health Bureau’s Covid-19 Vaccination Operation, issued a clarification at the regular press briefing on the Covid-19 situation yesterday that no consensus has yet been reached concerning the possible effects of mixing doses of different Covid-19 vaccines.
The comments from Tai came after a question from the media as to whether the government has found a solution for Macau residents who have been vaccinated with the Sinopharm inactivated virus vaccines and who now cannot travel to the USA, where this vaccine is not recognized.
Admitting that there is no solution for such cases, Tai said that “the mixing of vaccines is something that is still being studied, and has not yet been approved. And the same goes for the third [booster] dose for the current vaccines.”
Continuing on the subject, the doctor added that the inoculation of persons under 18 years of age with the Sinopharm vaccine is still in an experimental and restricted stage and requires special authorization from mainland authorities.
“The vaccination of children and adolescents with the inactivated virus vaccine is just for emergency cases and a large majority of people are not included in this emergency plan,” he said.
“Once we have the documentation that proves the safety and efficiency of the use of vaccines in different ways [compared to what is being done currently] we will inform [the public] about this and we will consider it,” he added.
Tai also clarified that of the eight severe cases of potential adverse events following immunization (AEFI), only one is currently being considered as directly related to the vaccine. The other seven have been dismissed either as cases of medical conditions surfacing coincidentally with the vaccine or inconclusive cases.
In the case involving a myocardial inflammation (myocarditis), the physician said that the government would assume responsibility over the treatment of the patient.
Questioned whether the patients concerned could make a claim using the vaccination’s insurance, Tai said that there is no such possibility in any of the cases, since, “the insurance only covers cases of death or severe incapacity due to AEFIs.”