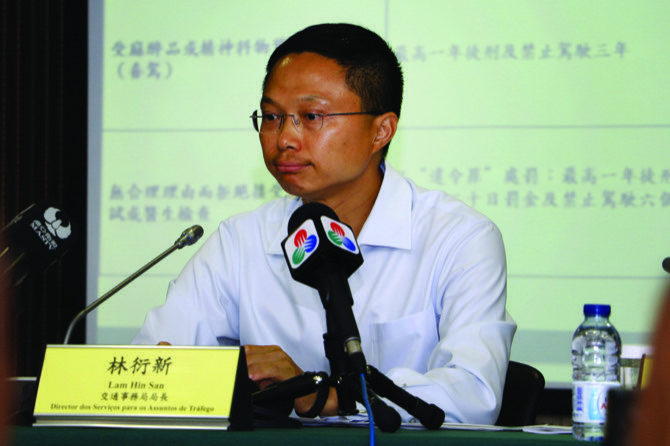 The government is proposing to review the Road Traffic Law in order to update its legal provisions to reflect the “clear changes that occurred with the development of society and the new traffic conditions,” the director of the Transport Bureau (DSAT), Lam Hin San, said yesterday at a press conference.

Lam said that the current law has been in place since 2007 and requires updates to “perfect its provisions and to use in a more effective manner the limited road resources.” The measures proposed include heavier fines for transit infractions and the introduction of a driving offence points system.

The government officials mentioned that during the 60-day public consultation period, they will be open “to receiving other suggestions that the public might consider relevant.” The changes proposed by the government focus on aspects such as the increase of fines for road traffic offenses such as illegal parking, driving under the effect of drugs or excess alcohol, and speeding.

The government proposes to double fines, with high fines issued in instances of recidivism, the tendency of offenders to reoffend.

Questioned on the topic and regarding possible reactions of the population to such a hike in fines, Lam said: “This is not a decision. This is just ‘brainstorming’ to which we call on the population to contribute with their opinions and suggestions. […] There is a high number of fines imposed on some [traffic offenses] – this might mean that the fines are not having a deterrent effect anymore.”

According to the figures quoted by the Traffic Police Department representative, Commissioner Ma Chio Hon, “in 2017 we issued a total of over 860,000 fines related to traffic offences; the large majority was related to illegal parking.”

Another of the changes proposed is also related to “recidivism” in relation to traffic offenses. Ao Iok Chan, DSAT Legal Support Department Chief, said “[currently] to be considered recidivist in traffic offenses [the driver] had to commit the same offense, but that’s what we are proposing to review.” Lam added that that the idea is to consider recidivism in the case of any traffic offense categorized as a misdemeanor, if “for example, a driver already had an offense for passing a red traffic light, then if he gets an offense for driving under the influence of alcohol, he can be immediately considered a recidivist.”
As the Bureau’s director also clarified, the government proposes that they will consider recidivists to be all drivers who recommit such offenses within a period of two years.

One of the main measures presented, which aims to “reduce of the burden of the courts,” is the idea of transforming traffic-related misdemeanors into administrative offenses.

The measure, which has caused some doubt, was said by Ma not to be a “reduction on the penalties but a way to elevate the efficiency of the application of the penalties and to cut on the working of the judiciary bodies.” But, in fact, depending on how this measure would be enforced, it might directly result in a decriminalization of several traffic offenses, transforming them into fine penalties.

In response to questions on this issue, Lam said, “this idea comes together with the possible enforcement of a point system for the driving licenses, meaning, that if the drivers are subjected to such penalties they can also incur a suspension and/or cancellation of their driving authorization.”

As for the other measures related to the “perfecting of the rules for drivers and other users of the roads,” a group of proposals have been put forward. For example, “the extension of the obligation of the use of seatbelts,” would make it mandatory to wear a seatbelt in all vehicle seats, not just in the front seats. Moreover, the “prohibition of the use of any hands-free communication device during the driving of heavy vehicles,” as well as the “restriction of usage of video display equipment in the front of the vehicles,” seek to remove anything which may cause distractions. Finally, there is also a proposal for the implementation of a mandatory measure to force the drivers to “turn-off the engines when the vehicles are stopped.”

Lam mentioned right from the start that the goal of these proposals is to reduce the number of accidents and deaths on the roads of the region, and in response to questions, he noted that data across the last three years demonstrates that the number of road deaths have been dropping (15 in 2015, eight in 2016 and six in 2017).
Also in decline are figures related to cases of driving under the influence of drugs and with an excess of alcohol in the blood. According to the Public Security Police, this is only now detected in “1 in every 100 people tested.”

The public consultation period will be launched on June 28 and services will be collecting opinions online, through e-mail, phone, fax and mail until August 26.

The director of the DSAT also said that four sessions of public consultation would be held during this period in order to allow the public to have a more direct presentation of opinions and questions.