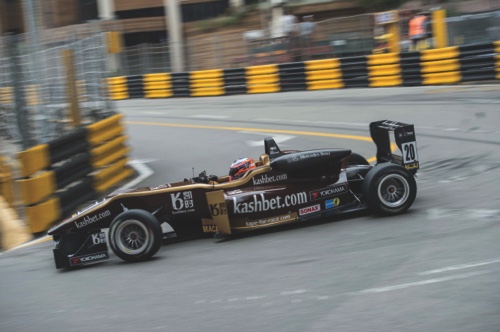 Felix Rosenqvist won the restarted Suncity Group Formula 3 Macau Grand Prix yesterday with the dominant performance after some early race scares.
Rosenqvist got off to a slow start and fell further down the order as fellow front-row starter and Mucke Motorsport teammate Lucas Auer led the field on the run down to the Lisboa bend.
But Auer braked slightly too late and ran wide – leaving the door open for the cars behind him to go through.
However, Tom Blomqvist and Esteban Ocon clashed on the apex of Lisboa and, with a damaged front suspension, Ocon understeered off into the barriers at San Fransisco Bend – taking his Carlin rival with him. This triggered a pile-up, with Yu Kanamaru launching himself over both Jordan King and Blomqvist’s car to end up on top of the barriers. The race was red flagged.
At the restart, Rosenqvist got away cleanly but Auer was right in his slipstream and slingshot past him on the run to Lisboa. However, he braked slightly too late again and ran deep through the corner – allowing Rosenqvist and Nick Cassidy through.
As Rosenqvist seized the opportunity to pull clear, edging steadily away over the remainder of the 15-lap race, Cassidy and Auer became locked in an intense battle for second place.
In the end, Cassidy fell back when he hit the wall and damaged his car – allowing Auer to take second place on lap 13.
All eyes were on Rosenqvist though, who struggled to find words to explain what the triumph meant to him.
“For the first time in my life I am completely out of words,” he said. “Everything ended well. I had luck with me, the car was quick and I did really well. It all came together for me for once. I have been countered by bad luck [during the F3 European Championship season, where he didn’t achieve better than eight place]. I couldn’t feel any better right now, it is unbelievable.”
Asked to comment about incidents during the post-race press conference, Rosenqvist got a laugh when he said that he was so overwhelmed that he couldn’t describe what had happened. “In one or two hours I will know what happened, because right now I can’t remember,” he said.
Second place Lucas Auer made two late brakes on the apex of Lisboa and fought for the runner-up position with Nick Cassidy, whom he overtook at the slow part of the track. “At one point Nick got a little bit slower, maybe he made a mistake and I was side by side with him. He let me go which was clever [of] him because otherwise we would get a lot of pressure from the back guys.”
Nick Cassidy said that he was a bit disappointed about losing the second place that he had held for part of the race, and said that upon touching the wall, he “struggled with the rear and had strange feelings from the car.” The New Zealander had to slow down, afraid he wouldn’t make it to the end of the race.
Fourth place went to Roberto Merhi on his F3 return, ahead of Nicholas Latifi and Stefano Coletti.