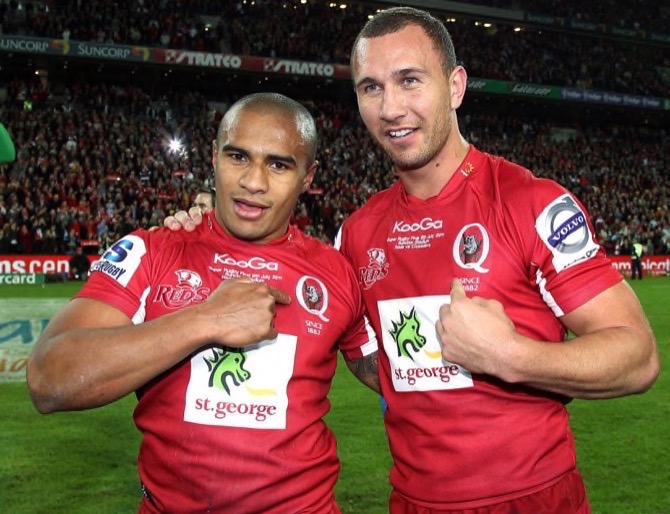 Quade Cooper (right) and Will Genia

Wallabies outcast Quade Cooper has found a comfortable new home at the Melbourne Rebels, playing a major role from flyhalf in the club’s unbeaten start to the Super Rugby season.

Will Genia, Cooper’s former halves partner for Australia, has been equally influential in the Rebels’ rise to the top of the Australian conference and to third place on the overall standings after four rounds.

Shunned by the Queensland Reds since Brad Thorn became head coach, and equally overlooked by Wallabies coach Michael Cheika, Cooper has found himself adrift within Australian rugby. He first found a welcoming shore in club rugby in Brisbane and then with the Rebels who have allowed him to flourish again as a uniquely talented playmaker.

Having proved himself anew, Cooper has been recalled to an early Wallabies training squad in what could be his first step toward selection for this year’s World Cup in Japan.

Cooper rose to prominence as a flyhalf with a singular vision and set of playmaking skills, who saw matches from a different perspective from most other players. At his best he was a devastating attacker and counter-
attacker when Australia valued those abilities and one whose defensive weaknesses could be masked.

But his ability to use his talent dwindled amid off-field distractions, and hostility from rival fans which shook his confidence. Thorn’s decision to exile Cooper from his hometown Reds might have been the last straw, but instead seems it may have been the decision that turned around Cooper’s career.

He rediscovered his love of the game by playing at its basic level — among mostly amateur club footballers — and he has returned to Super Rugby with the Rebels apparently re-energized.

Now the Wallabies are apparently interested again in harnessing his talent for the World Cup where their flyhalf options may be thin, reliant on the more conventional Bernard Foley and others like Kurtley Beale who are occasionally adapted to the role.

Genia, whose long association with Cooper makes him better-placed than most to judge, sees a player ready to return to the international play. The pair combined to steer the Queensland Reds to the Super Rugby title in 2011 and have renewed their combination in Melbourne.

“Quade has been consistent over the first three games and I’m sure he will be hoping that carries on through the season. And if he does there’s no reason why he can’t get an opportunity in a [Wallabies] jersey,” Genia said.

Even Wallabies coach Michael Cheika has been given pause by Cooper’s form this season. Cheika could never be said to be a member of the Cooper fan club; the conservative Australia coach apparently found Cooper capricious and unreliable.

But he can’t dismiss the form of an experienced player in a position in which the Wallabies aren’t currently strong. AP