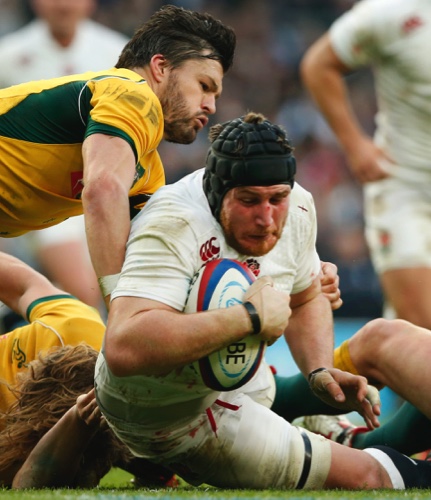 England’s Ben Morgan, and crosses the line to score a try held by while being held Australia’s Adam Ashley-Cooper

England landed a psychological blow on great rival Australia ahead of next year’s World Cup by winning 26-17 at Twickenham on the back of a dominant scrum and tries in each half by No. 8 Ben Morgan.
The Australians slumped to a third straight loss to end their European tour, with their flaws in the scrum ruthlessly exposed by the English like they have been many times over the past decade.
Two penalties from George Ford and a 29th-minute try by the rampaging Morgan pushed England into a 13-3 halftime lead, but flyhalf Bernard Foley touched down soon after halftime to give Australia hope.
Morgan picked up from the back of England’s powerfully driven five-meter scrum to dive over in the 57th for 20-10 and although replacement lock Will Skelton replied with a try three minutes later, two more penalties from Ford — taking him to 16 points — saw England home.
The victory salvaged England’s autumn international campaign after defeats to New Zealand and South Africa that heaped pressure on coach Stuart Lancaster for the first time in his three-year reign.
“It’s been a tough four weeks but I’m so proud of the guys, who have all stuck together,” said England captain Chris Robshaw, whose work at the breakdown was a key factor in his team’s win. “I do feel a little bit of relief right now — a loss today would have lingered with us a bit more.”
It is Australia’s worst performance in an end-of-year tour since 2005 — when it also lost three tests — and the team’s malfunctioning scrum is a major worry 10 months out from a World Cup in which Australia faces England and Wales in a tough group.
“There are going to have to be changes out there in the way we scrummage,” Australia captain Michael Hooper said, echoing the thoughts of coach Michael Cheika.
“What we are doing now is not conclusively working enough,” Cheika said. “We need to change our technique, perhaps our strategy, we need to be doing a lot more wheeling … Perhaps we are too honest in the scrum.”
England’s dominance at the set piece revived memories of the teams’ meeting in the 2007 World Cup quarterfinals, when prop Andrew Sheridan led a destruction of the Australian tight five. And given their ascendancy in this department, the English should really have sewn the game up before Ford booted a 77th-minute to guarantee there was no way back for the tourists.
Promising Australia attacks in the first half were cut short by a try-saving tackle from Courtney Lawes and crucial turnover from Robshaw near the line.
Morgan was more decisive at the other end, taking a pass from Tom Wood and rampaging through three tackles to ground near the posts for a try converted by Ford.
Foley gave Australia a cutting edge by piercing England’s defense near halfway and exchanging passes with Rob Horne to canter over in the 45th. England’s attacking game became ragged but its scrum stood up well.
Quade Copper was bundled into touch behind his own line to give England a five-meter scrum, from which a big heave allowed Morgan to pick up and dive over as Australia’s pack careered backward.
“He has come storming back,” Lancaster said of Morgan who has played the last two games in place of the concussed Billy Vunipola. “For me, he has been one of the standouts.”
Australia beat Wales in its opening November test before narrowly losses to France (29-26) and Ireland (26-23).
There was a minute’s applause before kickoff at Twickenham in honor of Phillip Hughes, the Australian cricketer who died on Thursday after being hit on the head by a cricket ball while batting in a domestic match.
Australia’s players wore black armbands as a mark of respect and two cricket bats with caps over the handles were placed next to the Wallabies bench, taking inspiration from the “putoutyourbats” campaign that has been spreading on Twitter to honor Hughes.

An environmental group says former Australia rugby union captain David Pocock was arrested yesterday after chaining himself to a digger during a protest against a coal mine in northern New South Wales.
The Leard Forest Alliance said in a statement Pocock was among 30 protesters who converged on the Maules Creek coal mine in the Leard Forest region to continue a long-running blockade.
The Alliance said Pocock and local farmer Rick Laird had been chained to the excavating machine for 10 hours when they were arrested by officers of the local police force. Steve Douglas , Sports Writer, London, AP