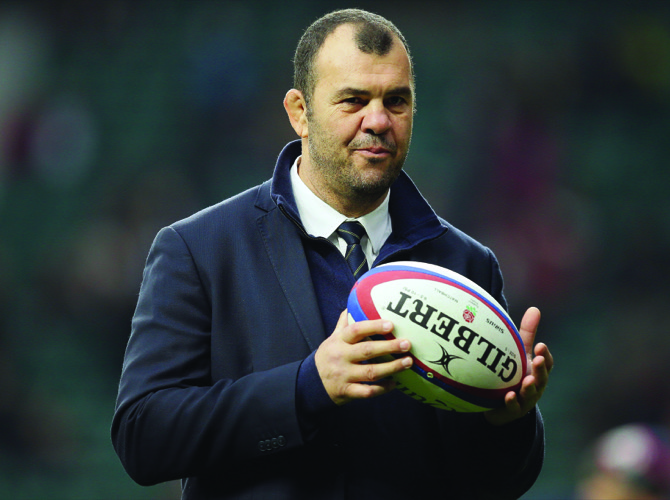 Rugby Australia has confirmed Michael Cheika will lead Australia to next year’s World Cup but from now on will work under the supervision of Scott Johnson, who takes a new role as Australia’s director of rugby.

Cheika was under pressure after the Wallabies won only four of 13 tests in 2018 – their worst record in 60 years. But Rugby Australia has kept faith in Cheika’s leadership, with chief executive Raelene Castle saying “he’s started something, he wants to finish it.”

Johnson, who is returning to Australia after working in the United States and Britain, most recently as Scotland’s director of rugby, will take up his position officially in mid-March. But he and Cheika will meet sooner to plot elements of Australia’s World Cup campaign.

“We are confident Michael is the right man to lead the Wallabies to the World Cup and the appointment of Scott Johnson will support Michael and his coaching team as they prepare for the tournament in Japan next September,” Castle said.

Castle and chairman Cameron Clyne announced the decision at a news conference in Sydney yesterday which came after the board of Rugby Australia completed a review of the Wallabies’ season and received a presentation from Cheika on past problems and future plans.

No announcements were made about the future of Cheika’s principal assistants, Nathan Grey, Stephen Larkham and Simon Raiwalui. Castle said their roles would be discussed when Johnson took up his role.

Castle said she had spoken to Cheika about the decision to appoint Johnson and he was satisfied with the changed structure.

“We’ve had some good discussions with Michael and he sees that as a model that allows him to do what he’s best at which is coach the Wallabies,” she said.

Johnson’s focus mainly will be on off-field issues. He will lead a wider campaign to rebuild Australian rugby, which has fallen into a malaise, losing ground to rugby league, football and Australian Rules football in the competition between Australia’s four football codes.

He will oversee a fighting fund to help retain Australia’s best young talent and will work to produce greater alignment between Australia’s four Super Rugby teams.

In the past, the Australian teams have been fiercely independent, refusing to adopt a single national style or coaching approach.

Rugby Australia will now adopt a system which New Zealand has used for many years under which Super Rugby teams, while still independent and competitive, work towards a coherent national style which ensures players joining the Wallabies have common skill backgrounds.

“Obviously winning a World Cup next year is really critical and we’re obviously confident we can do that with the right program,” he said.

“But what’s clear today in sport is that that only buys you support for a short period of time.

Johnson, 56, was Australia’s attack coach under John Connolly at the 2007 World Cup.

“I am excited to be returning to Rugby Australia in the director of rugby role and I am looking forward to supporting Michael and the Wallabies in their build up to the World Cup,” Johnson said.

In a statement, Cheika said the new structure will be “great” for Australian rugby. AP